Utilitarianism is defined as ethic based on consequences. An act, either it is morally wrong or good is acceptable as long as the end outcome is greater. In this essay on utilitarianism, I would argue Peter Singer’s calculus preferences, equality is for all living being but sacrificing one for greater good is plausible. Counter argument of Immanuel Kant’s moral deontology claim, it is immoral to consider a human being as a means to an end. John Mills’ actions are right as long they promote happiness, wrong if they produce the opposite of happiness as the reply for the counter argument.

Don't use plagiarized sources. Get your custom essay on
“ Utilatarian, Deontology and Virtue Ethics ”
Get custom paper
NEW! smart matching with writer

In conclusion, I would ethically rectify my claim in supporting utilitarian argument. Singer claimed that it is wrong to choose animals as research subjects in order to benefit human beings. Both humans and animals should be considered equally in the moral calculus, if it is morally permitted to use human being in research, then only, would it be permitted to use animal.

And, if we were to consider the use of humans as well as animals and the research was considered to have great overall benefit for all, then the animals might be used since the general good is the most important thing.

“Moral law should be universalized”. Kant stated that concept of a good will from morally proper motive is the base for considering any action. If it is the act from some hidden motive or for personal gain it is label immoral duty even if it is otherwise appears morally good.

Cruelty to animals reduces the feeling of compassion in man, an immoral duty. Therefore, researching animal to gain cure for diseases is wrong, because it is immoral action to sacrifice another living being for the personal gain of humans, although the end results appear morally good. Kant’s theory is a strict morality.

Universalize moral duty is good but some situations are exceptional. The outcome of the act is the reason the act was perform and if the outcome is general happiness then it is a morally right thing to do. Mill supported this as he stated actions are right as long they promote happiness, gaining a cure for incurable disease promotes happiness overall to general public. Therefore, researching on animals for cure will provide a plausible outcome which in this case a general happiness for the entire society. According to Mill, general happiness is the foundation of standard moral deed, overruling Kant’s concept of good will.

In conclusion, I have to agree on utilitarian concept on judging the consequences than the action. Although it is immoral act to achieve the morally good, the final outcome is the most important objective in life. Deontology is defined as ethics based on duty or act. Moral value lies in the action, not in the consequences of the action. In this essay on non-consequentialism, I would argue Immanuel Kant’s deontology based on categorical imperative. Counter argument from Mill, general happiness is the foundation of standard moral deed. Replies based on Kantian views and conclusion on disagreeing non-consequentialism concept.

“There is no if in moral action”. An action is considered moral only if one acts out of a sense of duty alone, without bearing in mind the consequences or self-interest. To understand Kant’s imperative, we need to know his description of inclinations and duty. Inclinations are based on desires, passions and emotions, whereas duties consist of reason alone. People are different, emotionally and rationally from animals as they make decisions based upon an inclination, a duty or a combination of the two. According to Kant, the source of moral justification is the categorical imperative and it must be based on reason or duty alone.

Mill argues that we should always aim at ensuring the greatest happiness for the greatest number of people and that, for instance, telling a lie in particular situation is good if telling that lie produces good consequences. As an example, lying to a rapist or a killer the location of the victim, an immoral action but for happier consequences for all. However, a Kantian would argue against this view, pointing out that we have full control only over our motives, not the consequences of our actions, so our autonomous will can only approve or disapprove of motives.

An ethics that focuses on consequences, then, is not based in the autonomy of the will. In conclusion, although Kant shaped modern thought on moral decision-making, I’ve to disagree with his deontological system. Some circumstances are different as for my opinion consequence plays a major role in evaluating moral thoughts. A duty is not being ignored but, rather, outdone by the greater need. Virtue is ethics based on character. Theory in which depends solely on the individuals themselves. In this essay on virtue ethics, I would argue Macintyre’s individual’s character as the key element of ethical thinking.

The two counter arguments will be cultural relativism and self-centred theory. A reply for both counter argument and a conclusion supporting virtue ethics is the best way to go. Virtue ethics identifies the central question of morality in relation with the habits and knowledge about how to live a good life. Macintyre claims that good judgment comes from good character. Being a good person is not about following formal rules. For example, a virtuous person is someone who is kind across many situations over a lifetime because that is his/her character and not because he/she wants to simply perform he/her duty.

Unlike deontological and utilitarian theories, virtue ethics do not aim to identify universal principles that can be applied in any moral situation. The first counter argument of the theory is the difficulty of establishing the nature of the virtues, especially as different people, cultures and societies often have very different opinions on what creates a virtue. Second, virtue ethics is self-centred because it’s mainly concern with the individual’s own character, whereas morality is supposed to be about other people, and how our actions affect other people.

Theory of ethics should require us to consider others for their own sake, and not because particular actions may benefit us. A reply for first counter argument is that any character quality defined as a virtue must be universally regarded as a virtue for all people in all times, so that such cultural relativism is not relevant. Replies on self-centred, virtues in themselves are concerned with how we respond to the needs of others, and that the good of the individual and the good of others are not two separate aims, but both result from the exercise of virtue.

In conclusion, virtue ethics is the way to go and is more acceptable in our current society. The decision for each action lies within the individual, and the characteristic of the individual plays a major part in it. This is because certain action may be morally good for one but not for other, and certain consequence may be morally good for one but not another. The term “virtue” is meant “strength” or “power”. The idea of “The Golden Mean” is that in our actions we must seek the right measure and proportion. Excess or defect is a departure from virtue. For these reasons, the Four Cardinal Virtues exist.

The four cardinal virtues of Prudence, Justice, Fortitude and Temperance are interconnected. This means that if you do not possess one of them, all the others are spoiled, and so you do not possess virtue at all. Prudence is the most important of the four cardinal virtues with knowledge being the importance of prudence. Thomas Aquinas lists many different components of prudence, but three main ideas exist. Memory is the order to know the meaning of the present. Docility states the willingness to remain open to reality and to learn as situations change. Lastly, prudence does not mean simply knowing what to do.

Justice, we give to each person what is due to him, and we do this consistently, promptly and pleasurably. It concerns right relations with others in society. Divisions of justice can be broken down into legal justice, commutative justice, and distributive justice. Fortitude synonym with courage and bravery but must be based on justice. The purpose of fortitude is to remove obstacles to justice. In its extreme form, it is the willingness and readiness to risk one’s life for the sake of that which is just. Aquinas stated that perseverance is undermined by a soft life.

The person who pampers in pleasure and always avoids discomfort will be unwilling to put up with the sadness he must experience if he is to stand firm in difficulty. The virtue of temperance rules our appetites for pleasure. By nature we desire the pleasure that is suitable to us. Temperance does not restrain us from the pleasures that are reasonable, but from those that are opposing to our reason. Temperance does not act against our natural human feelings, but works with them. In conclusion, Aquinas thinks the cardinal virtues provide general templates for the most outstanding forms of moral activity. 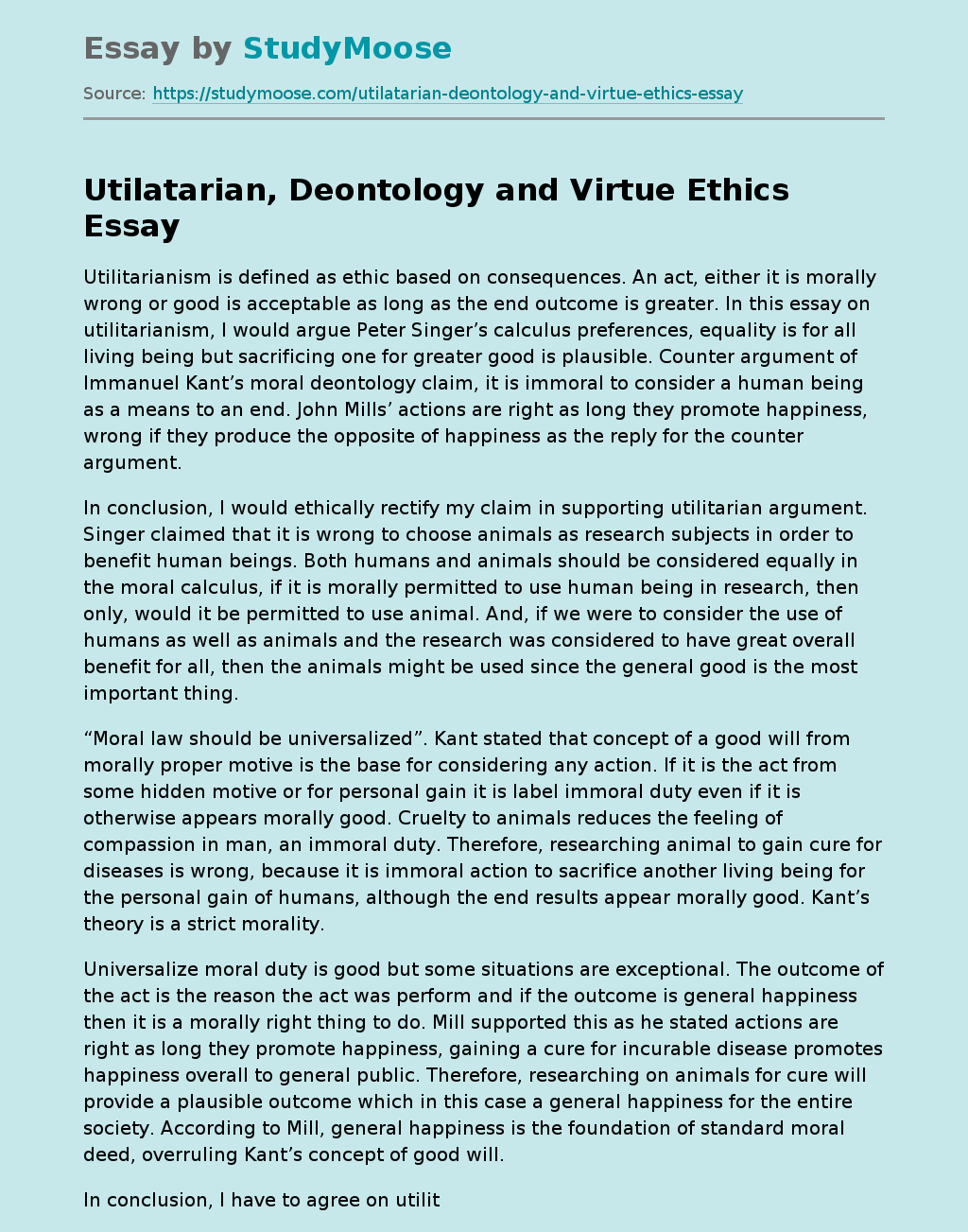