The media is a means of communication, as radio, television, newspapers, and magazines, that reaches and influences people (Media. n.d.). It was not long ago that the newspaper and local television stations were the only access to the news. Therefore, the news and journalist were held to a higher moral and ethical standard. The media has a responsibility to be truthful, objective, and to show impartiality when reporting to the viewer. The media’s is responsible for delivering accurate information that allows people to form an opinion based on the reports.

Don't use plagiarized sources. Get your custom essay on
“ The Issue of Ethical Egoism and Decreasing Obligation of Today’s Journalism to Deliver Truthful News to the Public ”
Get custom paper
NEW! smart matching with writer

As technology has improved and more media technology is available, we have seen the media becoming more opinion than fact. Because the media has an important role in delivering news, they also are morally and ethically responsible for providing the news accurately. Today the media is more interested in ratings and profit than reporting accurate information. This means that we are receiving fewer facts about the news and more personal opinions of the journalist or their affiliated stations.

This bias reporting has caused a breakdown in the democratic free thinking society. This is why the media should be held responsible for reporting the truth and protecting the democratic society. In my essay, I will address the decreasing obligations that, journalist use when reporting the news that can have adverse effects on the public. My essay will also address the media’s responsibility through these ethical theories and perspectives of Deontology and Utilitarianism and perspectives of Virtue Ethics and Ethical Egoism.

The media’s first responsibility is to be truthful when reporting the news. Defining the moral ethics of the media is the Society of Professional Journalist ethical view that was revised in 2014. Society of Professional Journalist believes that public enlightenment is the forerunner of justice and the foundation of democracy. Ethical journalism strives to ensure the free exchange of information that is accurate, fair, and thorough. The society declares four principles as the foundation of ethical journalism those are to seek the truth, act independently, minimize harm, and be accountable and transparent and encourage their use in its practices of all media. An ethical journalist will operate with integrity (SPJ, 2014). These are not rules but a guide that encourages all who engage in journalism to take responsibility for the information they provide. How effective the code of conduct implemented by media organizations will directly depend on the journalist regarding just how important ethics in journalism is for our society (Middleton, 2011).

The ethics of journalism and other media’s responsibilities can be assessed by using two ethical theories deontology and utilitarianism and one moral perspective of virtue ethics. The definition of Utilitarianism is a consequentialist ethical theory that states that its the greatest good to the greatest number of people that is the measure of right and wrong (Mosser, 2013). Utilitarian is particularly common among the professions of free societies that are associated with mass media such as journalism (Christians, 2007). According to deontological theory, it focuses on what we are obligated to do as rational moral agents (Mosser, 2013). Deontology is also known as the duty ethic because rules bind you to your duty. The general concept of virtue ethics begins with morality and is based on character. Many consider virtue ethics to be more of a complementary theory to be used in combination with the ethical theories of utilitarianism and deontology (Mosser, 2013). What virtue ethics offers us that is an internal motivation to be of moral character.

If one applied utilitarian theory to the ethics of journalism and the media today a key question would be how many would benefit versus how many would suffer. The ethical theory utilitarianism has been the overwhelming guiding influence on media ethics and has dominated as the go to ethical theory in North America in general (Christians, 2007). The utilitarian theory of the greatest good to the greatest number of people that is the measure of right and wrong fits the responsibilities of the media. The media is most often trying to collect an audience to maximize its profit. This may seem like the greatest good for the majority that the viewer receives their story and the media is making money. The media is making money but are not taking into consideration what is in the best interest of the viewer. The media is making money on the popularity of their news station giving the impression that they are delivering the news for profit (Blodget, 2010). However, one of the consequences of utilitarianism’s widespread prevalence is the lack of critical thought when solving complex ethical issues (Christian, 2007). What happens when a journalist thinks that his opinion of the facts is in the best interest of the public and arrogance replaces objectivism? Then the public will receive bias journalism. I think that media should be able to make a profit but not at the expense of the consumer right to the truth.

As the code of ethics was written one would say that the Society of Professional Journalism took a deontological approach to the professional ethics the media should uphold. Essentially they followed a set of rules that dictated what was considered ethical. Journalist” decisions regarding ethics did not come from within (Quinn, 2007). The deontological approach would be a particular set of rules that were laid out by the SPJ’s. First, the media should take responsibility for the accuracy of their work. Meaning they should verify their work before releasing it to the public. Second, The media should act independently. The highest obligation is to serve the public. Fourth, be accountable and transparent. This means taking responsibility for one’s work. Fifth, Minimize harm. Treat their sources, subjects, and colleague’s with respect (SPJ Code of Ethics, 2014). The deontology theory gives the sense of duty that the media should follow when reporting to the public.

If you were to apply virtue ethics to the media’s ethical responsibility, it would be that the internal aspect of virtue ethics makes it much harder to manipulate the media’s actions for self indulgence. Many consider virtue theory to be used in combination wth the ethical theories of utilitarianism and deontology (Mosser, 2013). However, it stands to all the elements of a distinct moral theory. What virtue ethics offers to the media that utilitarianism and deontology do not is an internal motive to have moral character. It is an ethical theory that focuses on asking ourselves, self-reflective questions regarding what kind of people we should be and how we should live our lives (Quinn, 2007). Virtue ethics, when applied to the media, would allow a journalist to use their moral reasoning when investigating and reporting an assignment. When applying ethical egoism to the media would be if doing something helps promote my happiness or helps me reach my desire then I should do it (Mosser, 2013). Ethical egoism is the opposite of utilitarian and deontology theories because with egoism we have no duty to anyone but ourselves. The ethical egoist also realizes that other individuals are out for themselves. By placing emphasis on the fact that everyone should be looking out for their own best interest, they also acknowledge that the desires of others are indeed valid (Mosser, 2013). If the media applies ethical egoism to their duty, then they could do whatever possible to get the story. However, the ethical egoist cannot advise someone to do what is not in their best interest. Therefore, in fact, the ethical egoist duty would be to advise the individual not to do what they ought to do. So the logic of the argument falls apart and collapses under its weight (Mosser, 2013). Ethical egoism does not hold up to the moral reasoning of the media.

In the fast paced world of the media, where decisions need to be made quick need to be made quickly, the need for an inherent sense of right and wrong is in high demand. For the media to determine what is ethical, it should be a conditioned response. While utilitarian is a theory, they provide an adequate starting point for which responsibility can be measured. However, its weakness is exploited by ethical egoism. The sense of duty of deontology require individuals to think critically, and this can have a large impact on the media. The perspective of virtue ethics gives the media a moral consideration that utilitarianism and deontology do not. The teaching of virtue ethics should provide the foundation for ethics. These theories give an idea of the ethical responsibilities that the media industry has to stand by and not to discourage the public and their opinions of the media. The media is not responsible for delivering the news that only makes the majority of the people happy; however, they are responsible for delivering the unbiased fact based news. The media has a social and ethical responsibility to provide informative and honest journalism. In conclusion, the media and the responsibilities of how the media reports to the public are very important. As the media outlets grow in today’s society so does the moral responsibility of how the media reports it.

The Issue of Ethical Egoism and Decreasing Obligation of Today's Journalism to Deliver Truthful News to the Public. (2021, Sep 27). Retrieved from http://studymoose.com/the-issue-of-ethical-egoism-and-decreasing-obligation-of-today-s-journalism-to-deliver-truthful-news-to-the-public-essay 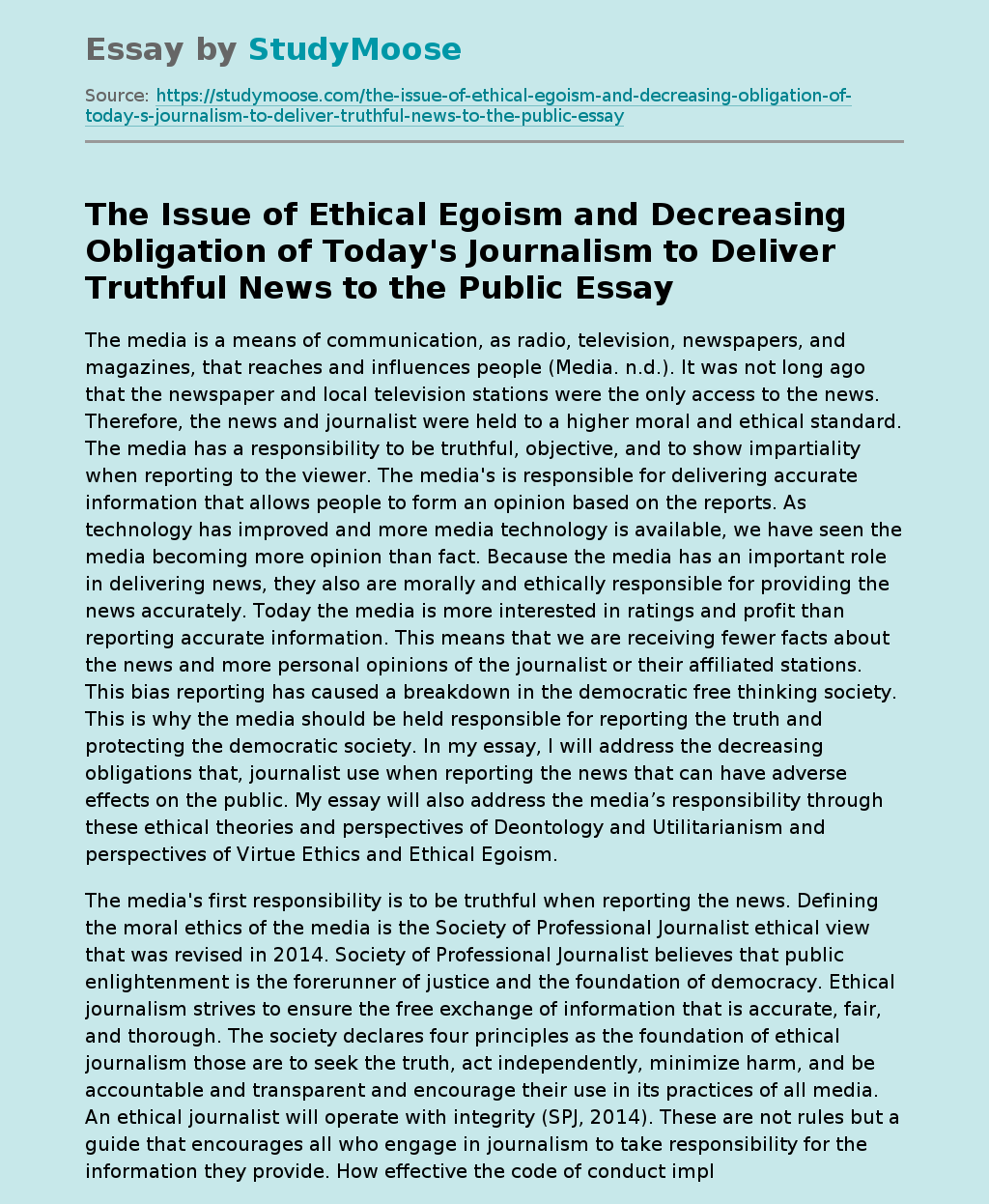