Should the Mass Media Always Tell the Truth

Theodore Roosevelt once commented on the mass media and journalism specifically – “The power of the journalist is great, but he is neither respected nor admired for it, unless it is used right.” The former president of the United States aptly summed up what the mass media should aim to do: to tell the truth and not abuse their power of massive influence. However, the recent spate of terrorist events tailored for the media seems to propose that the media should not always tell the truth, and that there are circumstances that do not require the whole and absolute truth.

Don't use plagiarized sources. Get your custom essay on
“ Should the Mass Media Always Tell the Truth ”
Get custom paper
NEW! smart matching with writer

That, however, does not imply lying, but instead the telling of a partial truth. The mass media represents the specific body of the media envisioned for a large scale dissemination of information. Therefore, it is understandable that the mass media wields immense powers of influence over society. As it is, we depend on the media for coverage on the events taking place around us and for information on important global events.

Proficient in: Importance Of Mass Media

As Senior Minister Goh Chok Tong of Singapore once commented, the mass media has a “moral and social responsibility”, and possesses powers of influence “greater than executives and corporate leaders”. Therefore, the mass media has to wield its responsibility and use its position of mass influence wisely – and this suggests a constant, steady, unwavering adherence to the truth. The extent of the mass media’s influence means that its every coverage of events would be eagerly lapped up and absorbed by members of the public, and the media has a social responsibility to cover and report events in a truthful, forthcoming light.

Society depends on the mass media or factual reporting and unbiased recounts, and the mass media should live up to this dependence and expectation, and be held accountable. Moreover, it is important for the media to tell the truth, especially when it pertains to a nation’s welfare, or is in relation to important political affairs that concern a country’s well-being. This function of the media in which it exposes misdeeds and misdemeanor is one that clearly entails a telling of the truth.

The media’s whistle-blwoing and expose on the Watergate scandal for example, shows the need for telling of the truth and journalistic integrity despite possible opposition and backlash. The media is commonly regarded as the fourth estate to judge a government’s efficiency, and there is therefore a significant reliance of a nation on the media to check and report factually, the truth on affairs big and small. Therefore, the media’s actions should always be guided by the truth as they have to live up to a societal need for the truth, and non-slanted, unbiased and factual reporting. Besides its ability to disseminate information on a large scale, the mass media also has the power to shape mindsets, create opinions and mould thought processes. For example, media coverage on the Bill Clinton-Monica Lewinsky extramarital affair created widespread disapproval of the former American president with females worldwide frowning on the adultery of Clinton. The media therefore shaped an opinion on a global scale.

Thus, the media should adhere to the truth, as opinions and mindsets are governed and influenced by the media’s coverage on events; dishonest or slanted and untruthful reporting would lead to opinions and reactions based on lies. Not only is this socially harmful, it is also unfair to the parties these lies are built upon. However, there are instances in which the truth will not set one free, and there is a gap between what society needs and what society should get. Senior Minister Goh Chok Tong commented at Today newspaper’s anniversary celebration that a media’s interest should converge with a nation’s goals of order and stability. Therefore, there are several circumstances in which the media, in order to move in tandem with a nation’s goals, has to avoid revealing the truth. An obvious instance is when the phenomenon of terrorism is tailored for the media. Instead of simply bombing an obscure enemy village without injecting widespread fear, terrorists nowadays are known to specially tailor their terrorist actions for media coverage, so as to fulfill the more insidious objective of sparking off panic, pandemonium and distress on a large scale.

This can be seen way back during the 1972 Munich Olympics in which Palestinian terrorists massacred Israeli athletes. The Olympic event was specially selected by the terrorists as there would be global coverage, and their acts of brutality and slaughter would be broadcast on an international scale, injecting distress across not only one country – but globally. Other instances include the execution of American Nick Berg and the 1995 Oklahoma City bombings. Terrorists who captured Nick Berg purposefully filmed the gory and grotesque execution process and circulated I on the Internet to spark off distress to all who chanced upon the film, using the large scale influential power of the Internet to publicise their terrorist activities. In the Oklahoma City bombings, the bomber Timothy McVeigh picked his bombing destinations as he knew it would be a good spot for maximum coverage. During such deliberate, depraved acts of using the media, and exploiting its influence, the media should not succumb or fall prey to such schemes, and should hide some of the truth of the matter, in order to oppose this manipulation of the media.

Moreover, such terrorist acts purposefully attempt to spark off pandemonium using the mass media, and by reporting the full unadulterated and undiluted truth, the media would be a complicit in these acts of trying to destabilize and threaten the public. Therefore, this is a significant instance in which the complete truth is not expected of the media. In the aforementioned Nick Berg execution, media moguls CNBC, CNN and ABC refused to air the execution videos to avoid causing distress to the public. By not fulfilling the supposed talk of reporting the absolute truth, these media stations saved America from further panic and pandemonium, allowing a quicker recovery from the attacks, and helping to salvage the remnants of American national security. Another good example of how the media should be allowed to not reveal the whole truth, is the recent London Tube bombings. Instead of airing unedited and therefore completely truthful footage of the bomb-scene, the news stations decided to air edited still footage, to not further upset the already distressed nation.

Therefore, it is pivotal to acknowledge that in such instances, the media should cover up the truth, in a bid to maintain stability and for the welfare of society, and to also prevent itself from getting exploited due to the influence it holds. At times, to not report the full truth in the interest of national stability is what the media has to do. When Jemaah Islamiah terrorists were arrested in Singapore, the media had to have the discernment and perspicacity to dilute certain information so as not to ignite racial tensions in Singapore’s unique multi-racial social fabric. Therefore, this is another instance in which the absolute truth would not be the necessary truth, in order to protect and maintain a country’s welfare.

Therefore, the media should always tell the truth, but at times, it is required of the media to tell half-truths in order to converge with the primary concerns of a country’s security and stability. Although backers of complete press freedom and seekers of pure, unadulterated truth like non-governmental organization “Reporters Without Borders” might say that half-truths are equivalent to partial lies, I believe that “partial lies” are at times what is truly required instead. It is far too absolute to say that the mass media should “always” tell the truth, as there are precarious situations in our world that make truth-telling an amorphous affair. Roosevelt’s quote on the power of the journalist and it being used right should probably apply to telling “partial lies” for the greater good as well.

Should the Mass Media Always Tell the Truth. (2016, Oct 05). Retrieved from https://studymoose.com/should-the-mass-media-always-tell-the-truth-essay 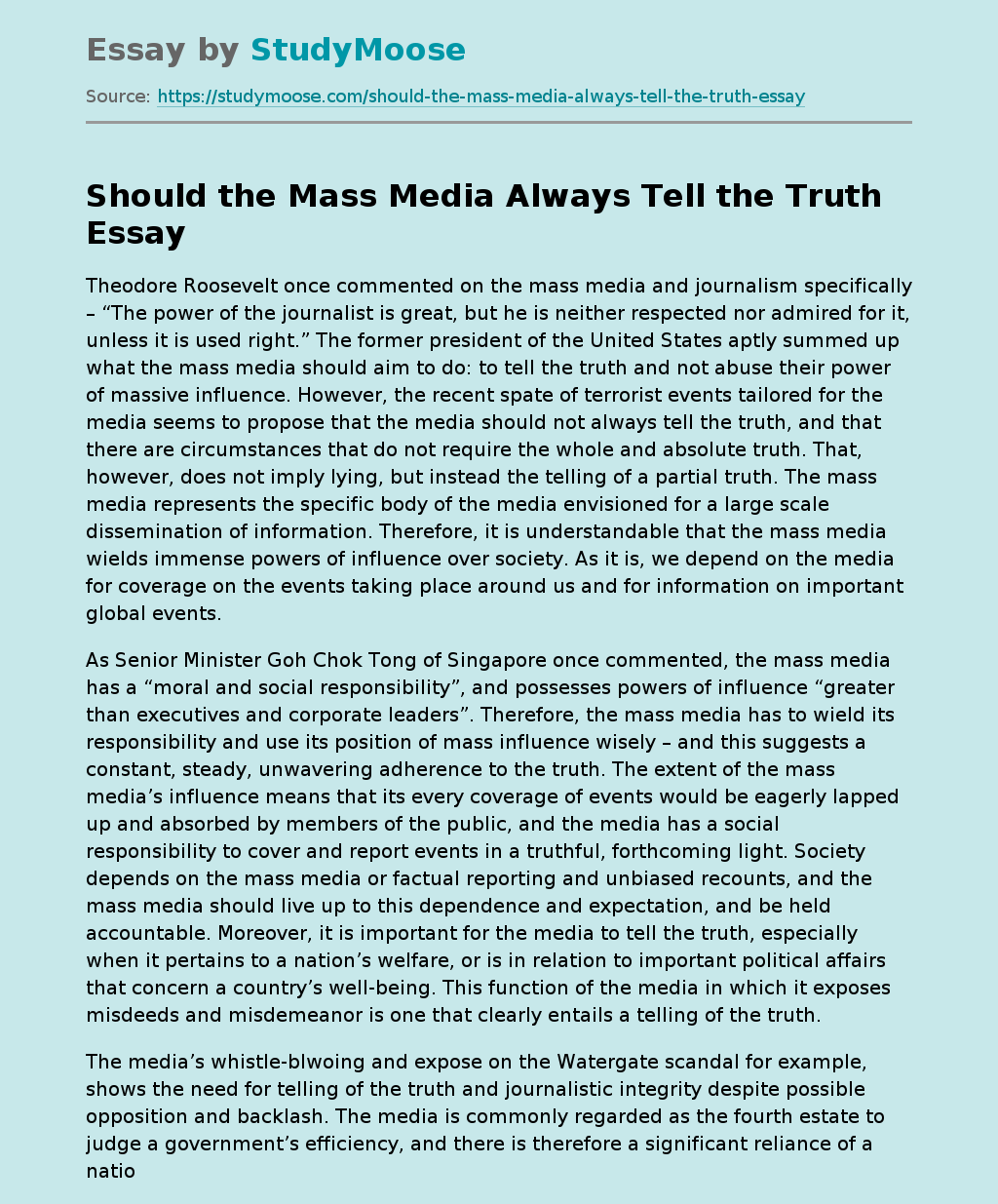