The Ugly Truth: Body Image and the Media

Body image, is very subjective and a perception one has in regards to appearance. Many people regard body image differently, and is something most people have dealt with one way or another. We all hold a mental image in our minds of how we should look. It is an idea that can take hold of a person and control their lives. The media uses body image to sell products, gain subscribers, and get one to read an article. Even though the media portrays information on exercise and good eating habits, which can in turn help one to make healthier life choices, the media also presents images of thin, unrealistic body shapes that is causing a negative effect on body image, an increase in eating disorders, as well as the escalation of body dissatisfaction.

Don't use plagiarized sources. Get your custom essay on
“ The Ugly Truth: Body Image and the Media ”
Get custom paper
NEW! smart matching with writer

Media has always promoted and used thin, beautiful, toned people in their marketing. They have shied away from using average size or plus size models, or even people with deformities or defects.

Beauty sells, and this idea has caused people over time to become more self-conscious of their appearance. People are often comparing themselves to others in regards to shape, height, weight, hair color, facial features, and many more. This type of criticism can be particularly hard on a younger generation that may not be fully developed and are still changing, such as during puberty. The media has often used extremely thin and unhealthy looking models, which young people look to as how they should look, and has been known to cause eating disorders with in the public to attain such results.

The media’s lack of use of what normal people look like has caused a dangerous issue with our youth as well as others. People often believe what they see and hear. The media using such images has distorted peoples thinking into what they view should be normal, when in fact it is very unhealthy and trying to obtain such results could have deadly consequences. The media needs to take more care when choosing their subjects, and should consider using more healthy normal subjects.  ‘In 2014, Victoria Secret came under fire for launching a campaign featuring Victoria Secret models standing a row with the words,  ‘The Perfect Body ‘. Even though this was a play on words for the launch of Body by Victoria, it sent a harmful message to the public ‘ (Howard).

Media use to be radio broadcasts, TV, printed magazines, newspapers, books, or even posters. The media has evolved since and has added the element of the internet and the World Wide Web. The internet has become more and more popular through the years, with even younger people being exposed. The internet has opened up new avenues for adults and children, things they may not originally had been subjected to. It seems every year even younger children are being introduced to the internet, whether it is being used in school, as a teaching guide, or if a parent is letting them use a tablet to occupy their time. The younger a person is, the more impressionable they become and this could lead to many issues down the line. In a perfect world a child’s use of internet and media access would be censored or monitored by parents, but often times this gets overlooked, and children are spending numerous hours being exposed to the internet and the images it holds. .  ‘During adolescents, poor body image is especially harmful, because of the rapid changes both physically and mentally occurring during puberty. Adolescents are becoming more and more exposed to media and the media keeps getting more and more provocative ‘ (Kovar).

The internet has also become the birthplace of social media. The use of social media is rapidly growing worldwide ‘ (Vartanian). Social media being a place that people can come together, interacting with one another sharing pictures and communicating within the user’s social network. These forums often filled with pictures of one’s peers, and comments of criticism and compliments. These types of applications can also have adverse effects on someone, if it is someone comparing themselves to others of the same age group, or hurtful communication in regards to a photo one posts online.

The media has negatively affected how body image is perceived. The overabundance of unrealistic body shapes has caused people to become extremely critical of themselves and the need to change in order to be considered beautiful or even  ‘normal ‘. If a person has unrealistic expectations of their body and how it should look than it can lead to body dissatisfaction.  ‘Body dissatisfaction is a term used to express the feeling that people may have that their actual physical appearance is not how they would ideally like to be ‘ (Kovar). A person suffering from body dissatisfaction often is at a higher risk of forming an eating disorder.

‘The National Eating Disorder Association (2006) reports that in the past 70 years national rates of all eating disorders have dramatically increased across the board ‘ (Kovar). Is this due to the increase in media access to more impressionable individuals? A person with an eating disorder, such as bulimia and anorexia does often suffer from a form of mental illness but their ultimate goal is to be thin. From 1988 to 1993 the number of incidences of bulimia in women between the ages of 10 and 39 has more than tripled ‘ (Kovar). One has to think where does this idea come from? It is an ideal that is being pushed upon society through the media. It is a message that is specifying the way one needs to appear in order to be considered beautiful. The media pushing this image of beauty is having a negative effect on our younger generation.

‘Over the past 20 years there has been an abundance of research pertaining to the impact of subjection to idealized bodies in the media and how people view and evaluate their own bodies ‘ (Mills). Men and women often have differing views of what is the ideal body image. Men often focus more on lean and muscular definition, and women ideally want to be slim. The research studies conducted most typically have been with women, there to has been research involving males and how the media can affect one’s perception of body image. The results of these studies have concluded that women being slightly more affected than men with body dissatisfaction.

The studies often expose participants to pictures or photographs of models that are attractive and very thin.  ‘A meta-analysis of the effects of exposure to thin ideal media was conducted by Groesz, who examined 25 experimental studies conducted between 1983 and 1998 involving a total of 2292 participants ‘ (Mills) .  ‘They concluded that women’s body image was significantly more negative after viewing thin media images, as compared to viewing control images or images of average size/plus models, and that this effect was moderate in size ‘ (Mills).

Another aspect of body image issues and body dissatisfaction results from social media. Social media has become extremely popular over the last few years, with platforms such as Facebook, Instagram, Snapchat, and others. These applications are a way for people to submit photos, stay in touch with family and friends by means of communication. These social forums have also become increasingly popular with younger people.  ‘Facebook is considered on of the more popular social media platform with over 1.3 billion regular users ‘ (Vartanian).

People interact in these networking sites with peers, often in their own age range, and is popularly utilized by women. The issue with this type of media is that a person can upload an image. These images can be photoshopped, and enhanced to make aesthetically pleasing, falsely representing the subject. This in turn can cause someone of the same age group to compare themselves to a peer based on a false representation. This causing one to develop feeling of poor body image and body dissatisfaction, by trying to be like something unattainable.  ‘According to sociocultural models of body image and disordered eating, body dissatisfaction can develop when women repeatedly compare their own appearance to the appearance of others ‘ (Vartanian).

‘With Facebook uploading 10 million new photographs every hour, Facebook provides women with a medium for frequently engaging in appearance-related social comparisons, and can therefore potentially contribute to body image concerns among young women ‘ (Vartanian). Social media being a great place for networking, this becomes a concern also because with not only being able to post pictures, peers can comment on these photos. So people filter or enhance a photo, post on a social media site, and then peers often can comment with a critique. This is fine if the comments stay positive, but once they become negative in nature, it can have serious effects on a person and their self-esteem.

With this issue starting to take center stage in our generation, companies have started campaigns to help promote body positivity. These companies want to embrace the fact that people are different, they come in various shapes and sizes, and beautiful can be something other than thin. These companies are aiming to help people with a better understanding of accepting oneself and being proud.  ‘Dove’s campaign for Real Beauty did a study and found about 4% of women around the world consider themselves as being beautiful ‘ (Howard).  ‘Dove is changing conversation on what it means to be beautiful through social media campaigns and videos ‘ (Howard).

The recent need for change in how the media promotes body image, has also  ‘influenced Project HEAL, to launch#WhatMakesMeBeautiful campaign to encourage women to celebrate traits, talents, and other factors that made them beautiful. The campaign was also successful in the eating disorder community, and displayed the intense need for social media movements that celebrated self-love and looking at beauty through a different lens ‘ (Howard). Even though there are companies trying to do better in the media, it is still a place that can cause a lot of damage.

Media is a very influential tool, seen by millions of people. One that needs to be taken seriously and major thought given to repercussions of what type of medium is used. With all the negativity that arises from the media and how it affects individuals, extra care needs to be taken to help strengthen individuals and not tear them down. Society needs to make a shift in their views and embrace the differences in others, it is those differences that makes something beautiful.

The Ugly Truth: Body Image and the Media. (2019, Nov 18). Retrieved from http://studymoose.com/the-ugly-truth-body-image-and-the-media-example-essay 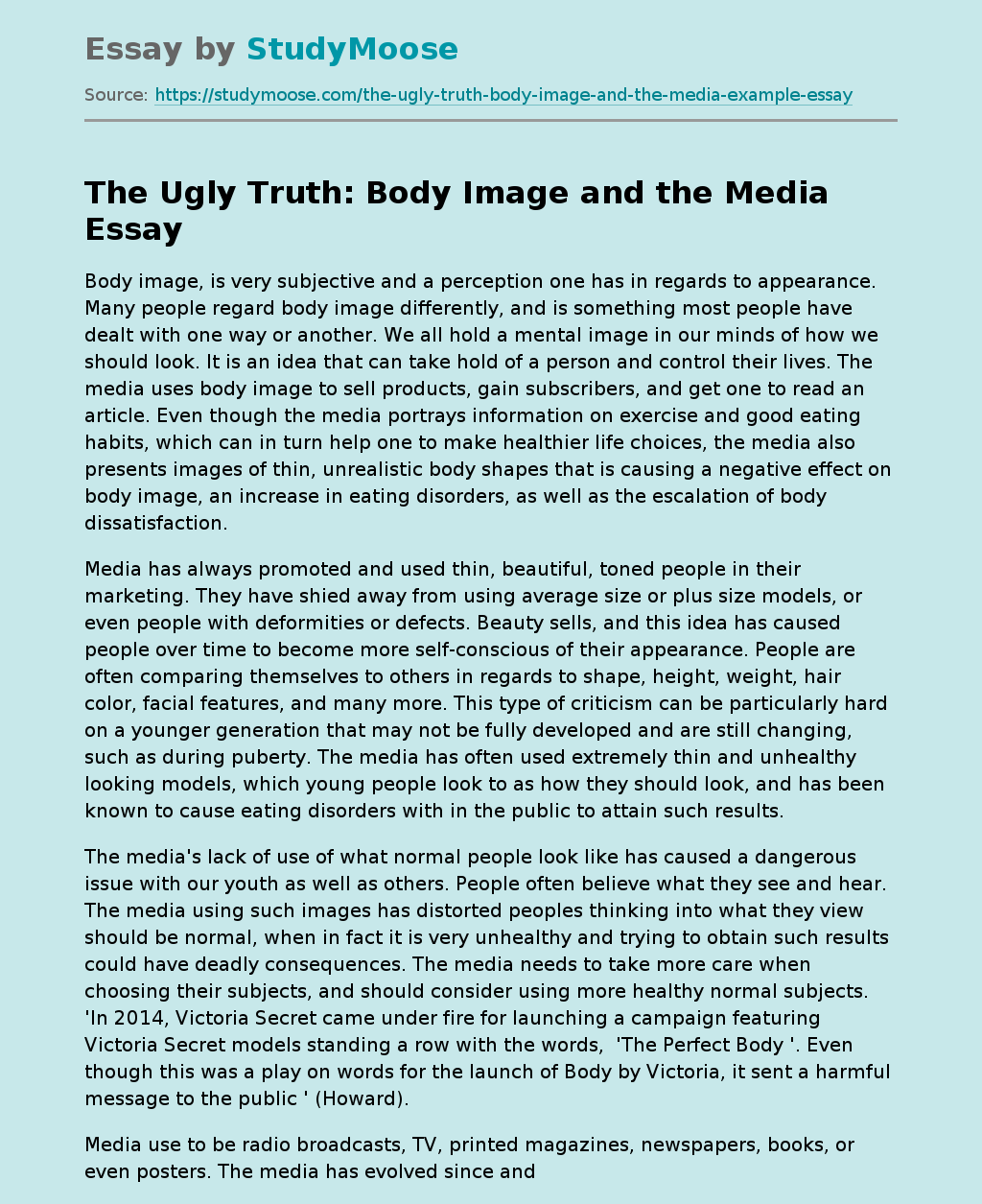