The Impact of Social Media on Women`s Body Image

Social media platforms have a negative effect on women and how they view themselves. Body image is simply the way we identify ourselves when we look in the mirror and envision ourselves to look and act a specific way. We live in a culture were beauty and slimness are exceptionally esteemed for women especially through the media. Women with negative body image become regularly infatuated with parts of their body they disdain. The area of communication is interpersonal communication because women strive to look like people that they tend to see behind the screen and believe that this is the way they should look like.

Don't use plagiarized sources. Get your custom essay on
“ The Impact of Social Media on Women`s Body Image ”
Get custom paper
NEW! smart matching with writer

In this paper, I will document how in our society today body dissatisfaction has become increasingly prevailing among women of all ages were the standards of beauty is wrongly accepted due to the immense amount of altering methods that grants users the option to manipulate photos.

Social media has become a major part of everyone’s lives, allowing us access to all information at our fingerprint.

The media has outlined and controlled what perfect should look like and influences the way women view themselves. As the normal standard of beauty turns out to be more unrealistic, countless women are changing themselves to acquire what they accept as the perfect body. Society has shown us that we ought to be skinnier or fit to be acknowledged in today’s world. “There is a mediated norm for body image in present-day culture, and it is characterized by bodies that are extremely thin.

This mediated thin-ideal is presented in mainstream media, and mainstream media are a source woman turn for information about how to look” (Hendriks & Burgoon, 2003). There are several studies that discuss and provide information on how the media affects body image issues in women. Social media platforms provide a negative body image. Women are more likely to develop body image issues because of contrasting themselves to social standards as depicted in online networking portrayals. Social networking sites such as Instagram offers users the chance to manipulate photos by using several techniques and numerous options to improve an image like using filters, brightness, or even change size or appearance of one’s body gestures. This availability has allowed women to post the most alluring pictures of themselves on social media sites and upgrade them to look like pictures which are regularly edited. “Altering digital imagery is now ubiquitous. People have come to expect it in the fashion and entertainment world, where airbrushing blemishes and wrinkles away is a routine” (Farid, 2009). This opportunity to edit images and exposure of manipulated images has a negative influence on body image of (women) giving them the chance to look like women they see on social media sites.

The Social Comparison Theory proposes that people are constantly evaluating themselves and do so by comparing themselves to others (Festinger, 1954). This could happen in a circumstance with bunches and individuals seen in media such as celebrities. The comparison of one’s self to others will, as a rule, result in one of two things; being either superior or more awful. Downward comparison happens when individuals compare themselves to somebody else and discover the other individual to be missing. Upward comparison, yet, is when individuals compare themselves to somebody else and discover themselves to be missing. “The process of social comparison may provide the mechanism by which exposure to media images induces negative effects. When women compare themselves to thin media figures while evaluating their own attractiveness and cannot match what is physically portrayed; body dissatisfaction can occur” (Tantleff-Dunn & Gokee, 2002). Women are not able to see how unlikely and unrealistic these measures are, she will probably work to get what is viewed as perfect by society. “In the recent years, online social networking has grown rapidly in popularity. Social networking sites, such as Facebook, Twitter, and many others, have become important among youths and also adults” (Boomen & Marianne wan den, 2009). Because of this regular exposure to social networking sites and streaming of the media, women are commonly presented with unrealistic ideals that they tend to take on to.  Women’s exposure to media pictures is what they make every effort to look like as having the skinniest and fittest body. This vast exposure to media pressures women to be thin and therefore creates body dissatisfaction among women. “Dissatisfaction arises when heavy viewers begin to see this thin-ideal not only as realistic but also physically attainable” (Holstrom, 2004). Social media platforms are not realistic they tend to give access to users to represent the best you and post pictures that not the most realistic and sometimes don’t represent the real you. In addition to that, the internet is full of application that allows the user to place as many filters as they wish while completely changing the original picture.

Through the centuries women’s body continues to be unrealistic. Photoshop is widely used among women as technology continues to grow around the world and this has caused society’s idea of beauty to change. Most of the female actresses and models represented through social media are airbrushed and look extremely fake; they when models and actresses are represented through social media they are airbrushed and thinned out to look beautiful, but they end up looking fake. “Body dissatisfaction has been connected to media consumption in that media are often identified as sources women turn to for information about their physical appearance, and thin model and actresses are ostensibly the standards in current media” (Van Vonderen & Kinnally, 2012). Women tend to skim through social media daily following many female actresses or models even if they are not a huge fan of them, only to check out their body appearance.

Through my research, it is apparent that media has a negative and even harmful effect on women. How the media portrays images of girls as being skinny, ideal and fit causes women to feel a sense of dissatisfaction with their bodies. In our society today, we should strive to show that media platforms aren’t realistic at all and that most of the pictures we view on social media pass through different editing fazes until we choose the perfect one to post. People need to keep in mind and understand that not all images they view on social media platforms are realistic and that people should be true to oneself and present themselves as they are without having to be the “perfect you”.

The Impact of Social Media on Women`s Body Image. (2021, Apr 20). Retrieved from http://studymoose.com/the-impact-of-social-media-on-womens-body-image-essay 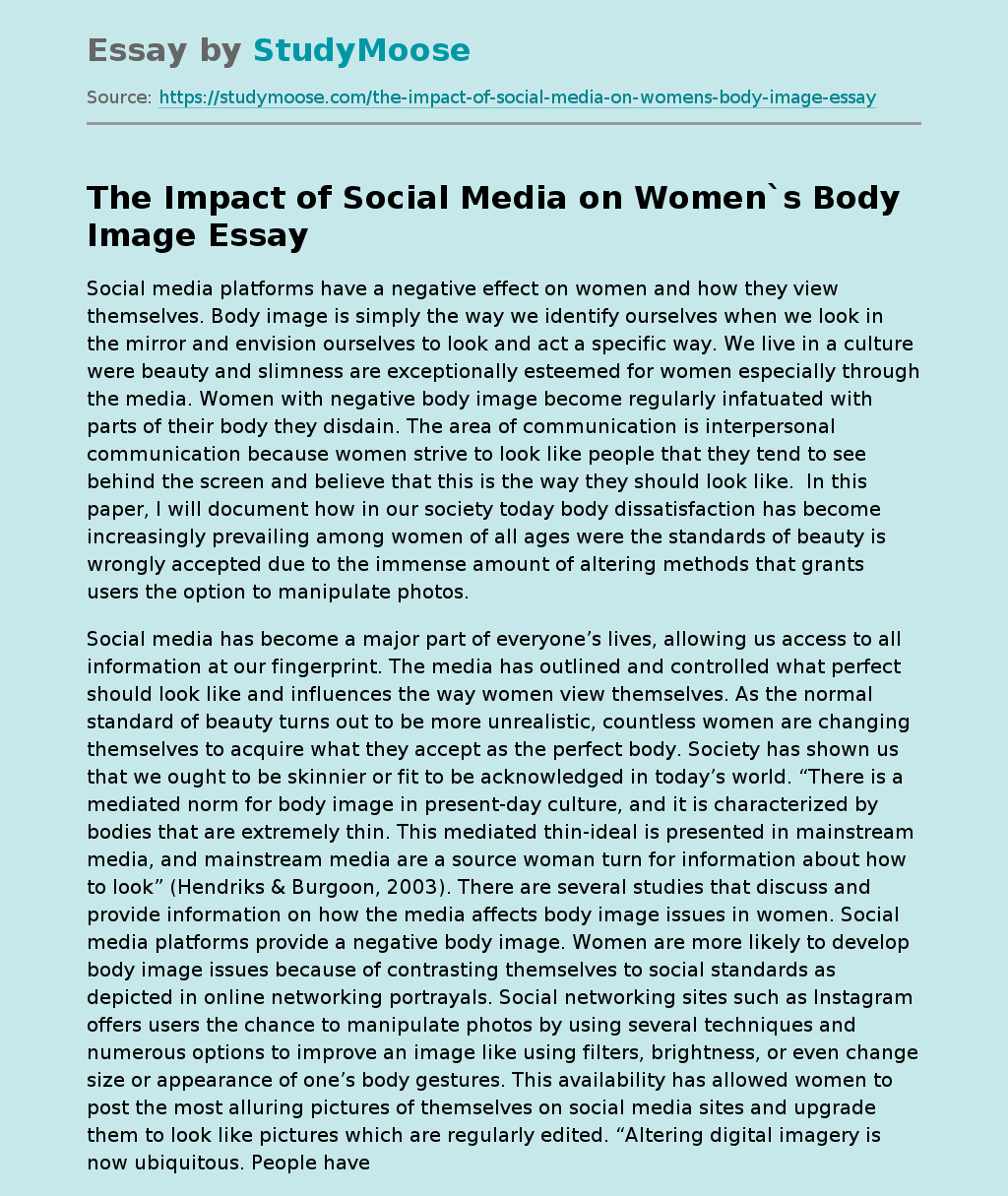