Peer Influence: The Good, the Bad, and the Ugly Essay

“Everyone needs to belong — to feel connected with others and be with others who share attitudes, interests, and circumstances that resemble their own. People choose friends who accept and like them and see them in a favorable light.” (Lebelle, 1999).

Middle school is a tough time. There are numerous changes occurring internally and externally amongst children in this age group. Boys and girls are maturing physically at rapid paces, but their emotional maturation is a lot slower. This can cause problems. Most young adolescents desire adult treatment, because they are beginning to look like adults, but, on the inside, they are still easily influenced children.

Don't use plagiarized sources.
Get Your Custom Essay on Peer Influence: The Good, the Bad, and the Ugly Just from $13,9/Page

Teens are desperate to fit in with their peers at school and will go to extremes to do so. This can be good and bad.

Illegal drug and alcohol use, promiscuity, bullying, and loss of identity can all result from negative peer pressure. Teachers need to be educated about these things. They need to know what occuring outside of their classrooms is in order to make a difference inside their classrooms.

Cliques play a key role in both positive and negative peer influence. Depending on which clique a child belongs to, he could become an honor student who never tries drugs or alcohol or he could become an alcohol or drug abuser, a bully, or he could become promiscuous which could lead to STD’s or teen parenting. There is a hierarchy when it comes to cliques. The popular kids are at the very top. These students are usually nice-looking, well-dressed, and involved with athletics and clubs. Those things are all well and good, but sometimes, the popular kids are also into partying with drugs and alcohol.

“A child who reaches age 21 without smoking, abusing alcohol or using drugs is virtually certain never to do so” (Lebelle, 1999). Unfortunately, that rarely happens. Most girls have tried alcohol by age thirteen and most boys have tried it by age eleven. The average American begins drinking regularly at age fifteen. That means that the majority of middle school children have already experimented with alcohol. Many cases of adolescent drinking are linked to pressure from peers. That is why it is important for parents and teachers to encourage their children and students to disassociate themselves from peers who drink. Young adolescents will be less likely to begin drinking or smoking if they steer clear from cliques that do not drink or smoke and if they are taught by their parents to stay away from alcohol, tobacco, and drugs.

Even if a child is encouraged from the start to resist drugs and alcohol, he can still become involved with these deadly toxins. Sometimes, the desire to conform to a certain image is just too strong. Trying drugs and alcohol may make a middle school child feel like he fits in with his classmates. If the ’cool kids’ are doing it, then a child who is unpopular may think that drinking or smoking will make him cool. Some young adolescents are able to do drugs and alcohol a few times and then quit whenever they want, but there are many who just try it once and then they are hooked. “It is difficult to know which teens will experiment and stop and which will develop serious problems” (Lebelle, 1999).

Pressure from certain cliques cannot only influence drinking and drug use, but also bullying. Most cliques have a leader and the members of the clique want to be pleasing to the leader. If the leader makes fun of fellow students who do not wear name brand clothing, then it is only natural for the other clique members to think that it is cool to do the same thing. Also, those kids who want to belong to a certain clique will closely watch how their coveted clique behaves. Then, they will try to mimic those actions.

There are also times when children who are more athletic will bully classmates who are smaller and not as gifted at athletics. This has even been said to be the cause of school violence. The two killers in the Columbine tragedy, Eric Harris and Dylan Klebold, were supposedly tormented constantly by the ’Jocks’. “When the two boys entered high school, they found it difficult to fit into any of the cliques. As is too common in high school, the boys found themselves frequently picked on by athletes and other students” (Rosenberg). Bullying is a deeply hurtful act that can torment and traumatize a child for life.

Promiscuity is something that used to be frowned upon. Now it is cool to be sexually active as a young child. Popular Culture is teaching are middle school children that the less clothing you have on, the more cool you are. Children are seeing sexual images everywhere and it is creating muddled thinking in their minds. Young adolescents have the incorrect notion that they are adults, but the truth is that they are nowhere near mature enough to handle sexual relationships. However, the pressure to have sex is abundant and hard for middle school kids to resist.

“Teens also have cultural beliefs about what is normal sexual behavior. Although most teenage girls believe that sex equals love, other teens — especially boys — believe that sex is not the ultimate expression of the ultimate commitment, but a casual activity with minimal risks or serious consequences” (Lebelle, 1999). The reality is that sex has many risks and carries serious consequences.

Sexually Transmitted Diseases and pregnancy are not carefully considered enough by young adolescents who want to have sex.

The pressure to conform is overwhelming for teens today. Cliques influence the actions of kids in everything from academics and athletics to drugs and sex. Our world has a misconsqued conception of what makes an individual ’cool’ and unfortunately our young people are being taught these messed up ideas everyday through the media and from classmates. Teachers can help by providing positive examples and encouragement for their young students.

Everyone knows about the negative affects of peer pressure. However, peer pressure can be positive; it is also not as scary as some may believe. “Studies show that, almost always, peer influence is weaker than adults believe” (Black, 2002). Adults tend to underestimate middle school children and their ability to make decisions on their own. When a child commits a wrongdoing, parents automatically want to blame peer influence. Yet research has shown that young adolescents are not necessarily drawn into certain behaviors by peer pressure, rather they decide to be more like their peers on their own.

It is no secret that middle school children strive to blend in with their peers. The need to belong is an important aspect in a child’s life. Peer pressure is real, but it is not always crippling. Positive peer pressure can be overwhelmingly rewarding. In contrast, negative peer influence can be catastrophic. Contrary to popular belief, middle school children do respect the thoughts of adults and desire to be like them. Parents and teachers need to remember that when they are battling negative peer pressure. “Although parents may be relegated to a lesser role in the influence they hold over their young adolescent children, these same children will listen to and emulate other adults. Whether it be teachers, parents of their friends, or community members, adults have the opportunity to influence and lead the young adolescent in positive directions” (Knowles & Brown, 2000).

Peer Influence: The Good, the Bad, and the Ugly. (2016, Jul 31). Retrieved from https://studymoose.com/peer-influence-the-good-the-bad-and-the-ugly-essay 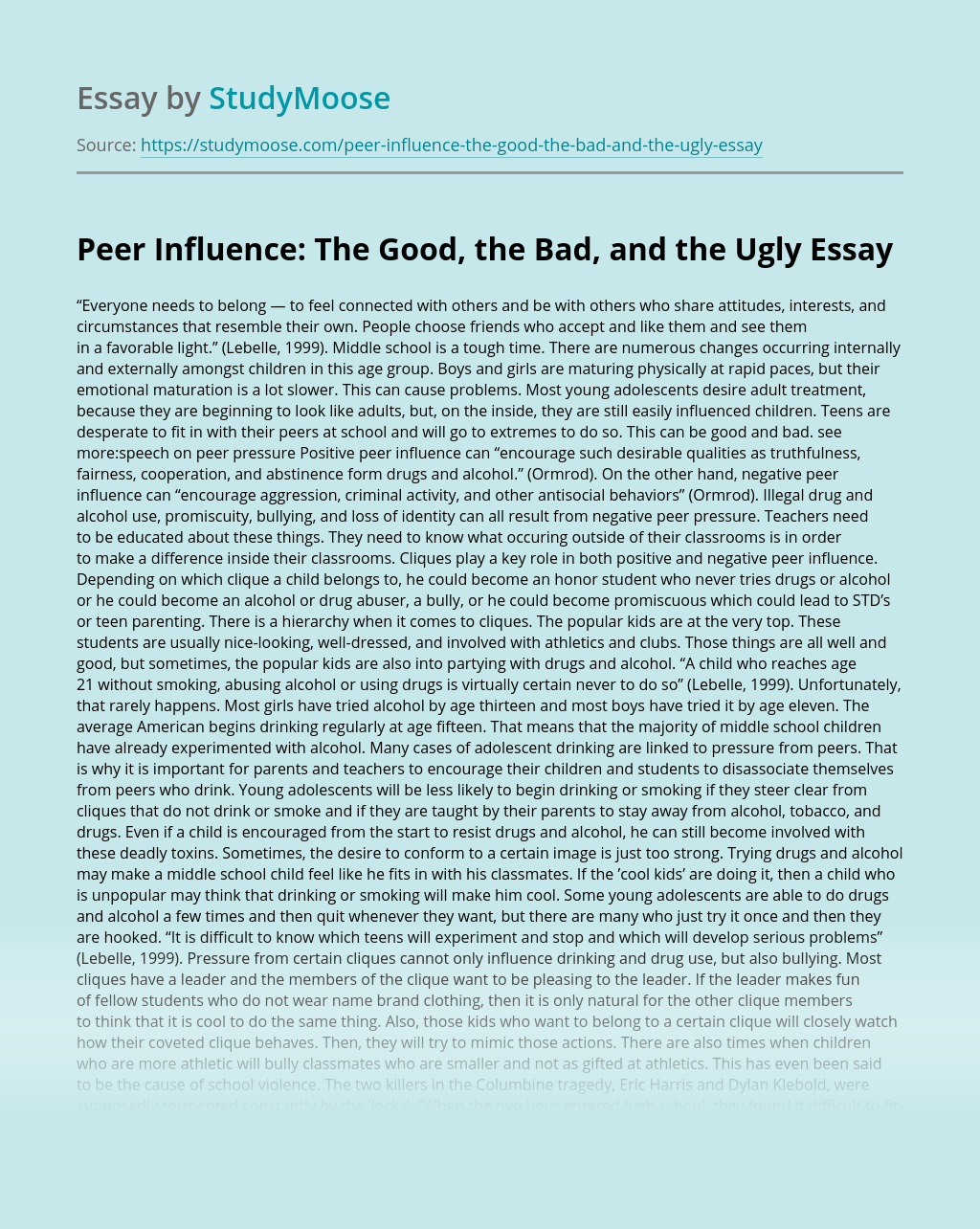 The topic of sex is a very controversial matter especially among teenagers. Teenagers are at a point in their lives where hormones are at a high and they feel the need to indulge in sexual activities. Therefore it is important that teenagers understand the importance of safe sex and the consequences of unprotected sex. There... VIEW ESSAY

Negative and Positive Effects on Teenage Peer Pressure Peer pressure. What is peer pressure? Peer pressure is the influence you feel from a person or a group of people to do something you might not otherwise consider doing. It’s not uncommon to want to fit-in and to feel like you belong in a community especially... VIEW ESSAY

In the essay, “Working at McDonald’s,” Amitai Etzioni talks about his belief that working, especially at fast food chain restaurants can be bad for teenagers. Working, for teenagers under some circumstances can be bad for them but sometimes its good depending on the daily schedule of whomever is working. If the teen is still in... VIEW ESSAY

Is it prematurely to discuss boy/girl relationships in primary school? Obviously it is, you state! Well, you may not wish to hear about it, or you might pick rejection over truth, but the fact stays that kids are playing out the cultural role that they are being taught as early as 2nd grade. Therefore, the... VIEW ESSAY

Introduction Teenage pregnancy or adolescent pregnancy is the early conception of female whose age ranges from 13 to 19. Just recently, adolescent has become an important issue in health in great number of countries, both developed and developing. However, pregnancy in adolescence is not an unusual phenomenon as it keeps on rising every now and... VIEW ESSAY