The Ugly Duckling A Story With Moral Value

In 1843 Hans Christian Andersen published a literary tale he titled “The Ugly Duckling. ” Already an accomplished storyteller, Andersen used his own life as a template; the story of the duckling who eventually becomes a swan mirrors Andersen’s own rise from working class plebe to celebrated author and poet, and while the journey of the duckling also resembles the blossoming of Perrault’s Cinderella, the bildungsroman tale that Andersen created is completely his own.

Folklore is the product of generations of storytellers, the original author’s names forgotten long ago.

Turn in your highest-quality paper
Get a qualified writer to help you with
“ The Ugly Duckling A Story With Moral Value ”
Get high-quality paper
NEW! AI matching with writer

They were created to explain the life around the storyteller and his listeners, and were told in a simple manner, uninterested in academic observation or scientific fact. Instead, they relied on humour, violence, allegory, and action and adventure to forward the plot, or to explain a phenomenon. There are many literary comparisons to be made between Andersen’s fairy tale and traditional folklore.

While The Ugly Duckling resembles a folktale in its use of anthropomorphism to illustrate the theme, in the protagonist’s similarity to other well-known archetypes, and in its attempt to convey a serious and morally valuable message, the tale is an Andersen original, and there are other differences, such as the lack of a true villain or hero, as well as a lack of any helper characters.

The story follows the growth of a small duckling from disappointing and cruel childhood to graceful and revered swan.

As a beast tale, it is also a moral tale, and the central themes of The Ugly Duckling are acceptance (both self-acceptance and the acceptance of others), the concept of beauty, and patience for the future and better things to come.

The setting opens in a realistic secondary world-an idyllic country farm-where the first words are an exclamation of “My, how big the world is! ” (p. 231) from a just-hatched duckling.

Unlike most fairy tales, it does not take place in a land far far away, but rather in a setting familiar to most children and adults. The time of year is established, with vivid imagery to bring the scene into focus “-it was summer. The wheat stood golden, and the oats green. The hay had been piled in stacks down the green meadows, and there the stork went on his long red legs…” (p. 229) The characters that inhabit the traditional folktale are generally one-dimensional, representing symbols rather than complex emotions.

The lines between good and bad are clearly drawn and characters do not develop internally; the selfish or wicked witch will not be redeemed, and the heroine remains innocent, and always prevails. The characters in The Ugly Duckling are not so well defined. The mother duck makes a concerted attempt to include her misfit child, but fails in the face of community ridicule, ultimately joining the others in forcing him away. She is neither villain nor helper to the protagonist.

The wild ducks who offer him companionship, the old woman who briefly takes him in, the cat and hen who question his ability to belong in the house, are also not particularly villainous. There is no real emotional growth that can be attributed to the main character, and he does nothing to achieve his fulfillment other than stumble bewildered and full of self-loathing from place to place, and the self-realization at the end the story is attributed solely to his discovery that he is indeed physically beautiful, and finally an accepted member.

Like Cinderella who was once naive, misunderstood and mistreated by her kin, the duckling embarks on a journey which ends just as he is transformed into his true self. As with a typical folktale ending, we do not see what becomes of the protagonist, as it is assumed that he lives happily ever. With these comparisons, The Ugly Duckling can be shown to have many similarities as well as differences. However, the lessons imparted, the influence and reach the story has gained have placed it alongside many true, traditional folktales.

The Ugly Duckling A Story With Moral Value. (2016, Oct 25). Retrieved from https://studymoose.com/the-ugly-duckling-a-story-with-moral-value-essay 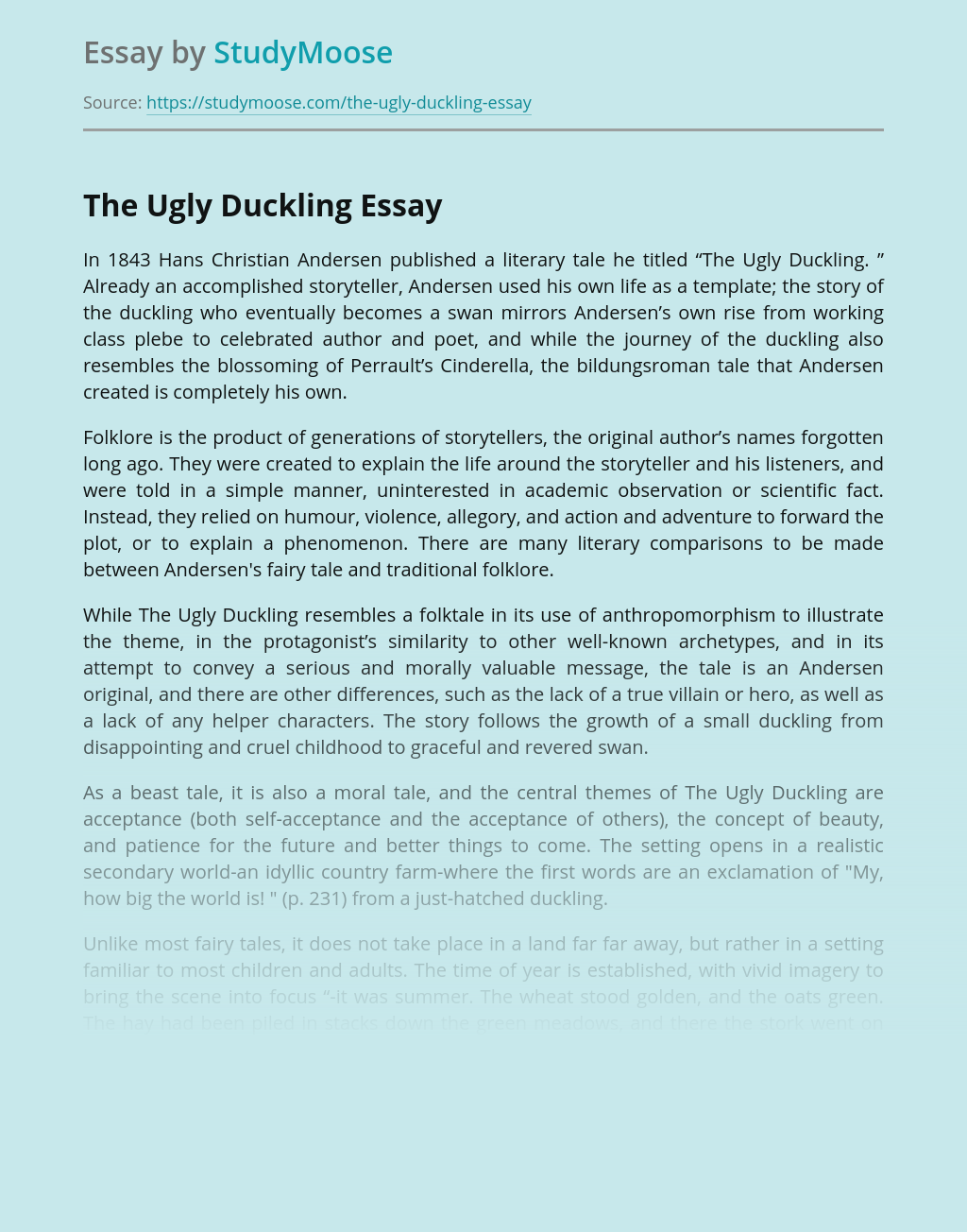 Turn in your highest-quality paper
Get a qualified writer to help you with
“ The Ugly Duckling A Story With Moral Value ”
Get high-quality paper
Helping students since 2015
Stay Safe, Stay Original