Turn in your highest-quality paper
Get a qualified writer to help you with
“ Disney’s and Andersen’s Fairy Tales About Little Mermaid ”
Get high-quality paper
NEW! AI matching with writer

In the modern day language, fairy tale is often associated with happy and great outcomes or fortune that people experience such as “fairy tale ending”, which means happy endings that concludes most of fairy tales. “Fairy tale romance” refers to a kind of love that resembles the love and romance of the male and female protagonists of most fairy tales that often depicts unconditional and undying love for each other (“Fairy Tale”).

One of the most visible characteristics of a fairy tale is that the protagonist always triumphs over villains though how helpless they seem to be over the antagonist.

Fairy tales also have happy endings most of the time and the lead role character marries the prince or they are united with someone they truly love. These characteristics are evident in the popular fairy tales of all times such as Cinderella, The Little Mermaid and The Little Red Riding Hood.

The protagonists are dreamful of the things that they wanted though this is impossible. For example, the little mermaid, Ariel, resides at the sea and fell in love with a prince, but the prince is a human and resides in the land. Despite knowing their differences, the little mermaid seeks help even from the sea witch just to be a human and be with the prince. Real life is far from the idealistic stories of fairy tales. The idealistic views should not be set always as true. Idealistic view that the little mermaid shows in the book is not always beneficial in the real world.

The sea witch was wise with viewing the situation with reality. Body The Little Mermaid is a product of the imagination of the Danish author Hans Christian Andersen which was written in 1836. The whole story is about a young mermaid living in the sea living with her father who is the king of the sea, her grandmother and five elder sisters When the little mermaid turns 15, she ventures on the surface of the water and sees a ship aboard a prince and falls in love with him. A great storm came and the prince almost got drowned but the little mermaid saves him.

The mermaid delivers him on the shore of a temple until he was found by a young girl (“The Little Mermaid”). She asks her grandmother if humans live forever when they do not drown. Her grandmother told her that human life is even shorter than that of mermaids, mermaids live up to 300 years and when they die they took form of sea foam and cease to exist. Humans, however, have an eternal soul that lives in heaven even after they die (“The Little Mermaid”). Days pass and the little mermaid long for the prince and for an eternal soul. She goes to the Sea Witch who sells her a potion who will give her legs in exchange of her tongue.

The little mermaid has the most beautiful voice in the world but drinking the potion will make her feel that she is walking on knives. The Sea Witch assured that she will get her soul of the prince marries her (“The Little Mermaid”). However, the prince is about to marry the princess from another kingdom who happens to be the girl from the temple whom the prince believes that saved him from the storm. The little mermaid came to realize all the sacrifices she has done to be with the prince but the prince is still not with her. She then became a spirit, a daughter of air.

She will gain an eternal for doing good deeds after 300 years. The time can be shortened if she finds a good child and adds a day on every tear she will shed for wicked child (“The Little Mermaid”). The Disney Company adapted the story of the little mermaid and showed it in the big screen. The Disney changed some of the part of the story and made it suitable for fairy tale lovers. The story is about the youngest daughter of King Tritons, Ariel, who is bored and dissatisfied in the life at the sea. She wanted to be with the humans above the surface.

She argues a lot with her father who described the humans as “barbaric fish-eaters” (“The Little Mermaid (1989)”). Ariel’s father has forbidden her to go to the land. But she still went despite her father’s warning and accidentally saved the prince whom she fell in love with. The Ariel decided to go to Ursula, the Sea Witch, and made a bargain to win the heart of the prince whom she loves. She also exchanged her lovely voice for legs. But she discovered that Ursula have bigger plans in destroying the kingdom in revenge of what King Triton did to her (“The Little Mermaid (1989)”).

The ending of the movie is a typical happy ending with the little mermaid marrying the prince. The main plot is similar from the original story with a young mermaid falling in love with a prince and eager to be with him. There are some alterations in the movie version produced by Disney to fit well and impress the audience. The main differences of the two versions are the violence, the conclusion and the moral of the story. The Disney version is presented for young audiences and violence is not the main part of the story.

The movie’s morale is to follow your dreams and your heart’s desires and everything will be well in the end. The conclusion in the movie is a typical happy ending and the protagonist triumphs against all the obstacles. However, in the original version, the story is tragic as the mermaids did not end up with the prince and the little mermaid dies at the end. The little mermaid is full of idealistic views because of her overwhelming curiosity of the land and eagerness to be with the one she loves.

She somehow acts rebellious by disobeying her father’s counsel not to go to the land. She abandons her past life as a mermaid and wants to live as a human despite of the many disadvantages because of love. Especially in the original version, she refused to kill the prince and preferred to die instead of him despite of her sisters’ sacrifice. It is always great to see a true love that unfolds slowly. But following surreal, idealistic views may have its own disadvantages and real life cannot be established based solely on idealistic views.

In the animated version of The Little Mermaid, Ariel defeats the Ursula and takes her father’s sea kingdom back. Ursula is seen as an ultimate villain in the story. However, Ariel does many wrong things throughout the story. She did not obey her father’s will, and she chooses the wrong options even though she knew it was not right thing to do for her and her family. The love from prince was not guaranteed at that point, but she chooses the love not her regular life at sea. Ursula should not be set as a villain in this story.

She can not be praised for her action; however, she was more realistic and wise with her modern views. She knew that it will never work between the little mermaid and the prince so she put conditions that should have discouraged the mermaid to buy the potion like cutting of her tongue. She took advantages of the situation. She achieved what she wanted; finally the prince chooses Ursula to be the one to marry in the Disney version of the tale. Also, she was the one that obtained her goal, the sea kingdom and the beautiful voice of Ariel.

The Little Mermaid is one of the lifetime fairy tales that continue to capture the hearts of many children around the world. In some aspect, Ariel’s action to follow love and her ideal life at other world than sea can be seen beautiful and courageous. However, the little mermaid has lost many advantages while she strived to achieve the solution for what she wanted because she chose the unreasonable means to achieve her desires. There are two main characters in this book which are Ariel, the little mermaid, and Ursula, the sea witch.

The two characters are completely different from each other throughout the course of the story. They differ on many things, especially in their point of view and how they view life. The sea witch has realistic views and the little mermaid has idealistic views. Because the sea witch views this situation realistically, she was able to obtain what she wanted – the beautiful voice of the little mermaid. However, the mermaid looses all in the original version because she chose to follow her ideal view and refused to accept in to reality that she and the prince are different.

With all the choices made by the sea with and the mermaid, their portrayals can be viewed differently. As such, even though the sea with was portrayed as a villain, Ursula was a wise creature who was rather realistic rather than idealistic. On the other hand, the protagonist mermaid was at a disadvantaged position because of the unwise decisions she chose under the influences of her idealistic thoughts. Therefore, the answer to the question, “Is common sense of good people winning the bad guys always true? ” is no. The statement cannot be hold as true at all times, rather, taking good chances and seeing all the possibilities are wise reactions in the real world. 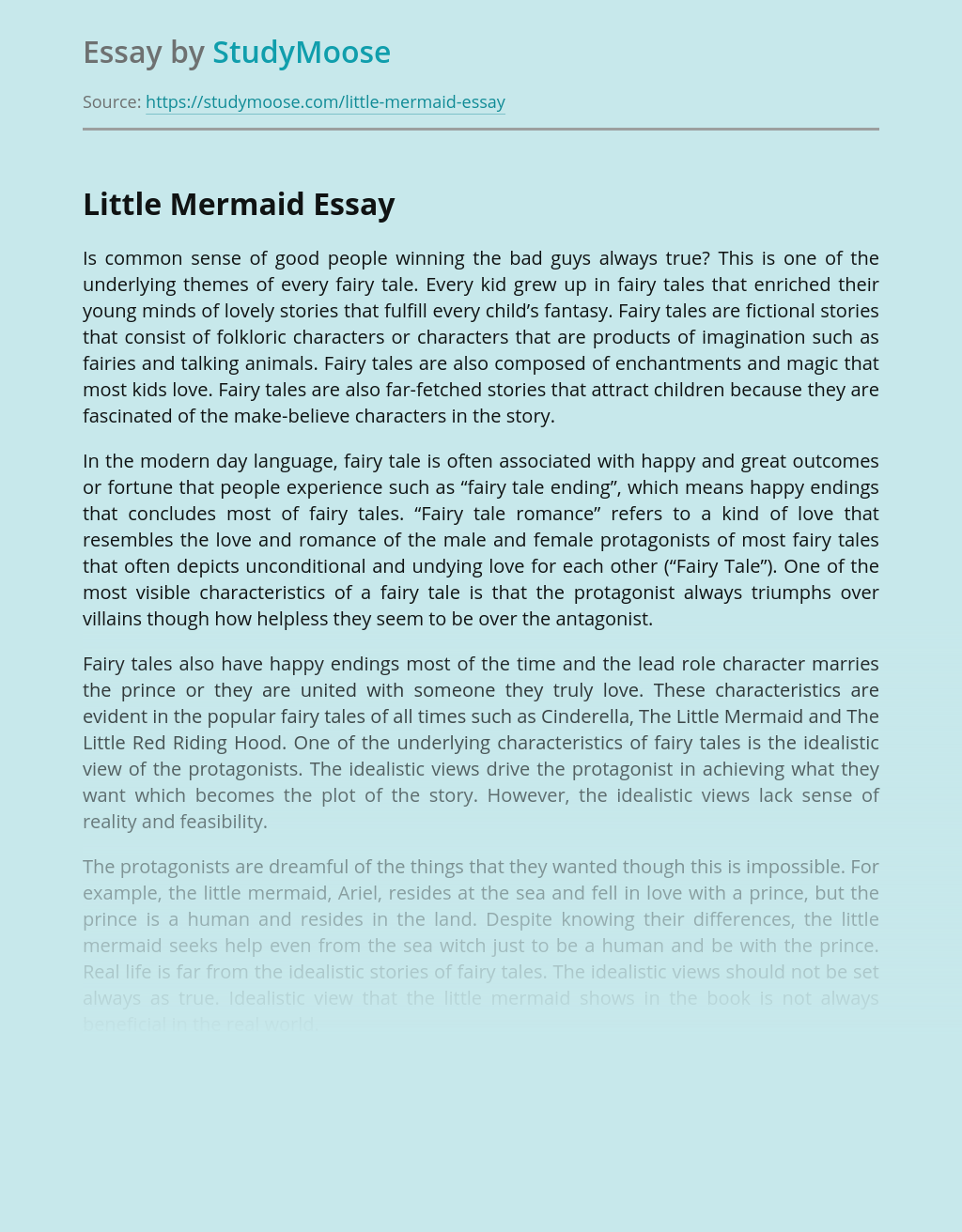 Turn in your highest-quality paper
Get a qualified writer to help you with
“ Disney’s and Andersen’s Fairy Tales About Little Mermaid ”
Get high-quality paper
Helping students since 2015
Stay Safe, Stay Original