‘In Little Red Cap,’ Duffy has successfully written about childhood and the loss of innocence. Discuss with detailed references to the poem; I am going to explore more deeply into Carol Anne Duffy’s poem, ‘little Red Cap. ‘ And discuss the journey from childhood to adulthood, due to ‘Little Red Cap’s’ loss of innocence. ‘Little Red Cap’ is one of the many poems that have been written by Carol Ann Duffy to portray a feminine side of life. Carol Anne Duffy has managed to do this by enabling each female character to have a voice to speak up against in many cases their husbands or partners.

Don't use plagiarized sources. Get your custom essay on
“ In Little Red Cap – Fairy Tales ”
Get custom paper
NEW! smart matching with writer

The poem “Little red cap” is based on the fairytale little red riding hood. However, this poem is a lot more mature and advanced in contrast to the original version of the story, which many people know and love. In the first stanza we are immediately introduced to the fact that ‘Little Red Cap’ is no longer a young child as Carol Anne Duffy uses a metaphor to clearly point out that she is ‘At childhood’s end,’ Which signifies Little Red Cap is at the beginning of her adult life and that she is no longer an innocent child, but she is now a independent young women.

However in the second stanza this image is slightly diminished as it states that she is only ‘Sweet Sixteen. ‘ this quote warns the reader that she is not as grown up as we were first set out to believe, in fact this makes her seem rather inexperience and naive.

Another quote that proves she still is juvenile is the sentence “I lost both shoes, but got there, wolf’s lair, better beware” This illustrates that ‘Little Red Cap’ is still a typical clumsy, love struck teenager, who is totally besotted with her first love.

It also injects some normality and vulnerability into the poem, perhaps Little Red Cap was trying her best to impress the wolf by dressing up in her new high heeled shoes and trying to look old and grown up for him, but unfortunately she hadn’t had enough practice or experience walking in her shoes that she had to take them off.

The use of rhyme and alliteration draws even more attention to this quote and forces the reader to speak quickly as it roles straight off the tongue. Overall Carol Anne Duffy has made this quote humorous, as it relates to reality and creates imagery, as the reader of this poem I can create an image in my head of a young girl trying hard to look older, I have even been there myself. 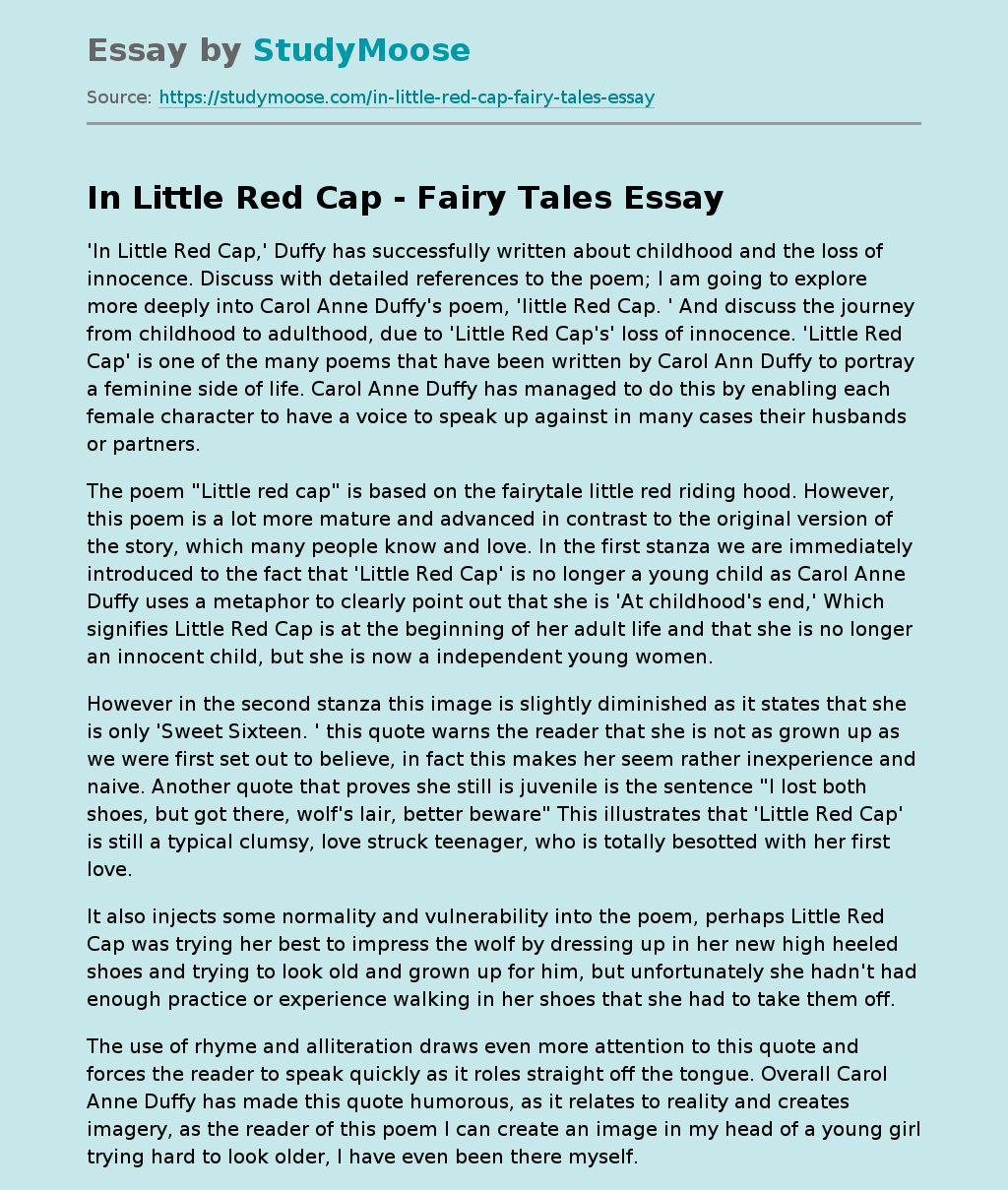