Don't use plagiarized sources. Get your custom essay on
“ Deconstruction of Fairy Tales ”
Get custom paper
NEW! smart matching with writer

In many fairy tales there are evil stepsisters that come along with the horrible stepmother and they taunt and harass, just like their mother. Three fairy tales that have the reoccurring themes of the evil stepfamily, women doing hard labor, and male dominance are Cinderella, Snow White, and Beauty and the Beast.

One of the fairy tales that shows the reoccurring themes of the evil stepfamily, women doing hard labor, and male dominance is Cinderella.

This story is a great portrayal of these themes because it includes all three. The theme of the evil stepfamily is shown through her two evil stepsisters and her stepmother. They torture and taunt her endlessly and make her feel like she is below them. Another theme that is common in fairy tales and especially this one is that women are put to do hard labor. In her own house she is made to clean and keep the house which causes her to be covered in ashes and be dirty all of the time.

The last theme is seen frequently is the theme of male dominance. Although not shown as much as in other fairy tales, Cinderella still experiences male dominance because she is under her father and the horrible stepmother that he married. In the end, like any other fairy tale, the poor woman that was a victim ends up happier than any one else in the story. She ends up marries the handsome prince and everyone like her stepsisters and stepmother have to pay for all the trouble they caused Cinderella.

Another fairy tale that depicts the three reoccurring themes is Snow White. It shows the evil stepfamily with having the evil stepmother. The evil stepmother is the fairest of the land up until Little Snow White grows up and then she becomes the fairest of the land. The stepmother is so envious that she sends a huntsman to have her killed. The huntsman having pity on her let her go and that’s when she stumbles upon the house in the mountains with the seven dwarfs. The theme of women doing hard labor comes into play when the dwarfs make her work to be able to stay there.

The theme of male dominance also comes into play with this because in having to work she is under the power of the men that are forcing her to work for them. Like all good fairy tales in the end she ends up married to a handsome prince and living happily ever after, while her stepmother died for having to pay for what she did to Snow White.

The last fairy tale that encompasses the three themes is Beauty and the Beast. Although not necessarily having an evil stepfamily, she does have two sisters that are jealous and envious of her. The youngest daughter, Beauty, was also seen as the smarter and better daughter of the three, for this the other two daughters did not like Beauty. When they become poor and can no longer live in the city they move to the country where they have to work for a living. The two other sister refusing to work, leaves all the work to Beauty, making her to the hard labor. When her father gets into trouble with a beast, she has to pay the price and surrender herself to him.

Her giving herself up means she has to live with the beast, being under his dominance. Over time they form a relationship and they fall in love with each other. When she tells him she can’t live without him he turns into a handsome prince, and tells her that he had curse put on him but now that she fell in love with him doesn’t have to be a beast anymore. Beauty and the Beast lived happily with each other, like a fairy tale would usually end. In this story no one in particular had to pay for any wrongdoings but her sisters never got the happy life they wished for while Beauty does.

For many fairy tales there are similar themes which are expressed in them. Usually they are depicted in relatively the same way but sometimes they differ. In all three of these fairy tales, Cinderella, Snow White, and Beauty and the Beast, they have the same themes of an evil stepfamily, women doing hard labor, and male dominance. These stories depict all the same themes, especially when they show that the women are the victim. In all of the faith tales the women are disrespected if they are not up to par with what the standard was at the time. Although in the beginning of all of the stories the women start at the bottom, they end up the happiest and on top in the end.

Deconstruction of Fairy Tales. (2016, May 21). Retrieved from https://studymoose.com/deconstruction-of-fairy-tales-essay 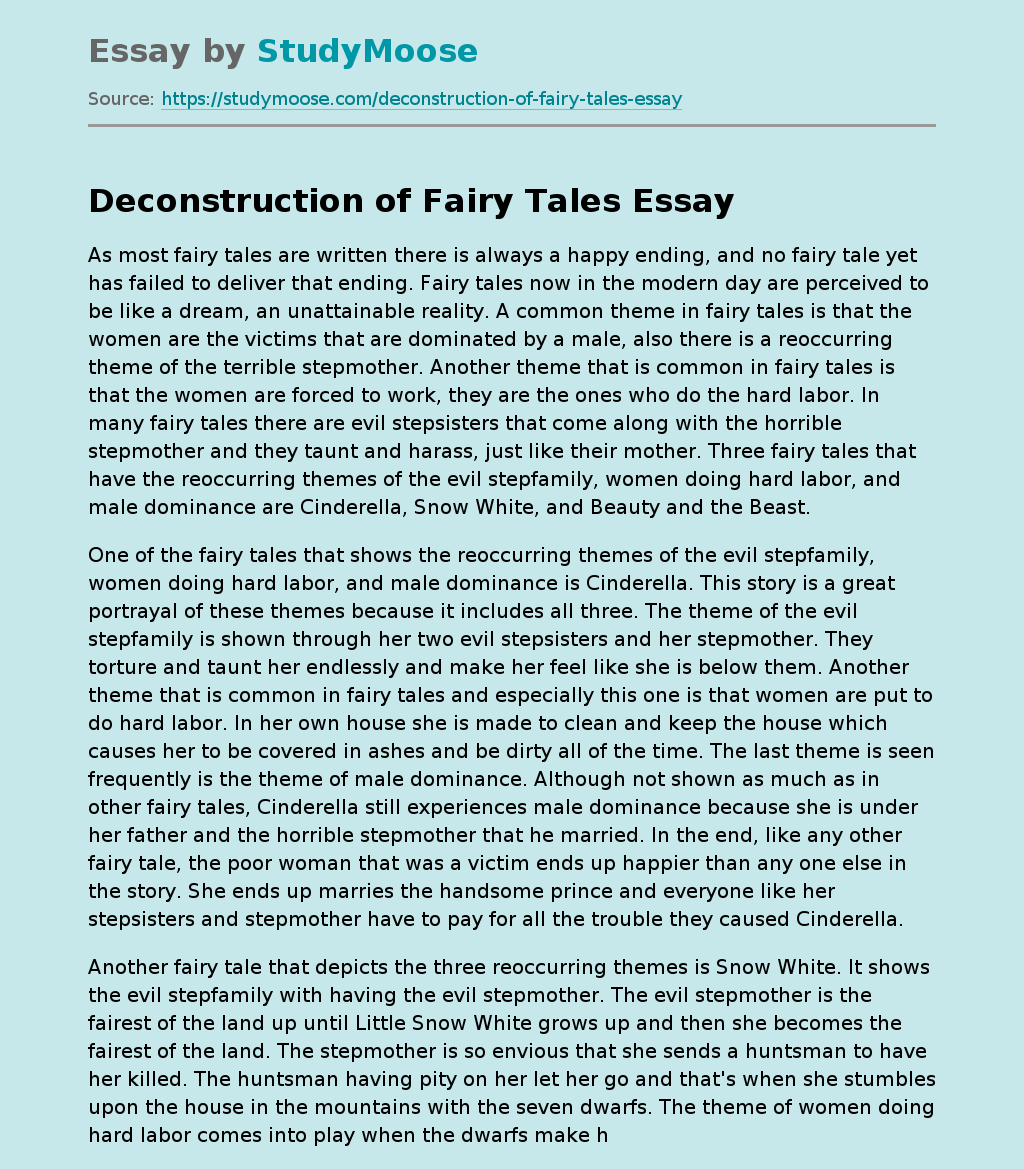