Psychological Impact of Fairy Tales on the Mind of Children

In today’s vain society, is it not refreshing to listen to tales of heroes that confront all adversities with courage, treat all people with kindness? Heroes who don’t give up and receive the rewards they deserve? Some might disagree, but the truth is that such optimism is a necessity in life. (Bettleheim, 1989) states that for children to mature, they need to be educated about the realities of the world, how one has the power to overcome life’s difficulties and will even be rewarded for one’s resilience, this can be achieved through fairy tales.

Don't use plagiarized sources. Get your custom essay on
“ Psychological Impact of Fairy Tales on the Mind of Children ”
Get custom paper
NEW! smart matching with writer

They awaken humanity within children, they teach children to use emotions in a world governed by logic, they teach them important morals such as what happens when one disobeys the law, emphasizing the pain one causes to oneself. Fairy tales allow a child’s imagination to flourish but at the same time, they often present worlds much like the real one, with norms and limitations that should not be surpassed.

Fairy-tales teach children social skills and ethics, many of which remain with them their entire lives ‘Pinocchio’ has taught children not to talk to strangers and not to lie, ‘The Ugly Duckling’ has taught them not to judge based on appearances and to be kind to others, even highlighting themes of alienation that many people can relate with as they grow up and by referring to such fairy-tales they can give themselves hope that there will be better days and ugly-duckling-like situations have potential to turn into swans.

In the end of the ‘Oz Books’ series by L. Frank Baum, Dorothy clicks her shoes together and takes herself back to Kansas by realizing that Oz’s power lies in his words. By telling herself she can do it, she did! (Tartar, 2010). Fairy-tales, thus, teach children how to ward off insecurities and the power of their minds.

Fairy-tales help develop children’s minds and their perception of the world changes according to what they read. Being more adaptable than adults, they are able to perceive the symbols in fairy-tales and apply them to real-life. Thus, fairy-tales help children understand different cultures and traditions which builds personality in such a way that it eliminates natural egotism. Fairy-tales allow children to realize all people have a sense of goodness within them irrespective of their race and gender. ((Irene), 2016) Fairy-tales allow children to recognize good and bad characters easily which builds their sense of right and wrong, but they can also mold their perspectives black and white consisting of flawless characters who are entirely good and characters who are born bad. Such characters have little to no development and exhibit only stereotypical characteristics of their gender or their social standing.

While some stories can provide optimism and confidence, others can cause harmful effects. Children may grow up with traumas of non-existent monsters if the tales they are told do not resolve the conflicts it raises or when the hero is vanquished fighting the monster. (Oppel) argues that fairy-tales are to blame when children are scared of darkness as it makes them imagine monsters that exist in the tales are real. Many origins of fairy-tales are gruesome. In the original tale of ‘The Little Mermaid’ Ariel turns into sea-foam when the prince refuses to fall in love with her, in ‘Peter Pan’ Peter kills the boys so they are never able to grow up. (Doyle, 2017). Such stories would naturally mess up the psychology of children and perhaps that’s why they have been modeled into the child-safe fantasies they are today.

It is argued that fairy tales in which princesses are damsels in distress and their beauty is the key focus are bad for human mentality and many women seem to complain about the representation of their gender in fairy-tales as well. (Anderson, 2019). Research by (Schnibben, 2014) shows that many of these messages are perhaps not being derived from fairy tales. Instead, fairy tales often show powerful women exhibiting heroic characteristics even in the most difficult situations. It is clear by her research that ideas of inner beauty, self-respect, and independence are more noticeable in fairy-tales than ideas of needing to be saved by a prince. The idea of pitting women against women like Snow White against her step-mother, Aurora against Maleficent, and Cinderella against her wicked stepsister is concerning, though it does bring attention to the problem which is a real issue in today’s time and society. It’s also important to note that the leads are never the ones beginning the conflict, they’re usually the ones resolving it giving a clear idea of which behavior is socially acceptable and which is not.

To conclude fairy-tales reap more benefits for children than adverse effects. When asked Albert Einstein for advice on improving children’s intelligence he said, ‘Read them fairy-tales.’ (Popova, 2014). Fairy-tales improve the mental capabilities of children and help them fit into their roles in society by teaching them ethical laws essential in everyday life.

Psychological Impact of Fairy Tales on the Mind of Children. (2020, Nov 24). Retrieved from https://studymoose.com/psychological-impact-of-fairy-tales-on-the-mind-of-children-essay 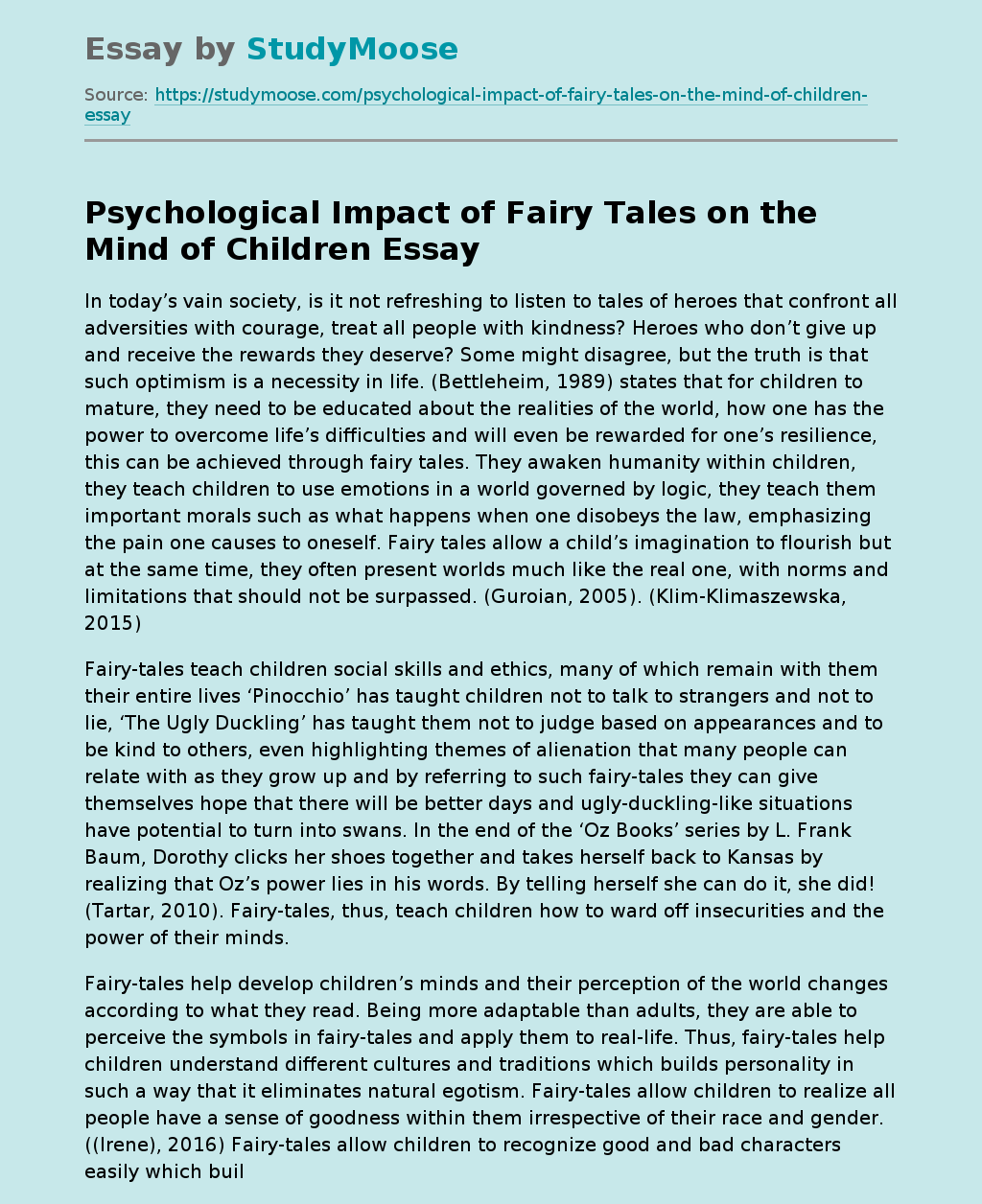