The timeless old tale of a little girl who meets a wolf on her way to Grandma’s house has been passed down through oral tradition from one generation to the next. The tale of “Little Red Riding Hood” has existed for centuries as a warning for young, disobedient girls. According to what was considered socially acceptable and prudent behavior and according to the author’s social and political standing, the tale has undergone significant changes.

The story of “Little Red Riding-Hood” is a descendent of an early tale by French folklorist Frank Delarue.

Don't use plagiarized sources. Get your custom essay on
“ “Little Red Riding-Hood” and the Brothers Grimm’s “Little Red-Cap” ”
Get custom paper
NEW! smart matching with writer

Charles Perrault wrote the first literary version of “Little Red Riding-Hood” in 1697, and since then, there have been many adaptations of this tale, including the Brothers Grimm’s “Little Red-Cap.

” Presenting a folktale by means of literature can be difficult in that the message of the story may not always be clearly understood by the audience. In comparing the historical, sexual, and moral aspects of Perrault’s “Little Red Riding-Hood” and the Brothers Grimm’s “Little Red-Cap,” readers are left appreciating the different means used in communicating the warnings of entering adolescence. Charles Perrault’s version, known as “Little Red Riding-Hood,” was not written for the purpose of warning children of the dangers of the forest.

Rather, Perrault modified the tale to entertain the royal court in 17th century France.

For his audience, Perrault added many metaphors. “In adapting a gross folk tale to the more sophisticated tastes of the royal court, he chose to remove all overt human aspects of his antagonist, relying simply on the powerful image of the wolf as predator, interloper…and scapegoat” (Bodkin 154). Perrault is responsible for adding the well-known image of the girl’s red hood. The hood is characteristic of the fashion of Perrault’s times, but the color red is indicative of the sexual theme of his version. Perrault chose to portray Little Red Riding-Hood as a direct opposite of the wolf: innocent and naïve. He hinted at sexuality through dialogue and gesture, intentionally portraying the wolf as a sexual, devious creature and Little Red Riding-Hood as an innocent curious girl:

What is interesting about Perrault’s tale is that Little Red Riding-Hood seems to be curious about the creature lying in her Grandmamma’s bed as she gazes from his arms, down to his legs, then back to his mouth, suggestive of the sexual aspect of this tale. The moral aspect of Perrault’s version is clearly spelled out at the end of the tale, that there are men out there that are willing to take advantage of naïve and attractive young girls. Children, especially attractive, well-bred young ladies, should never talk to strangers, for if they do, they may become a wolf’s dinner.

The heroine from “The Story of Grandmother” is a little girl who is spoiled, naïve, and tainted with sin. As a result, she is raped and swallowed (like her grandmother). Perrault’s version removed this aspect, as well as the appalling description of the little girl eating her grandmother’s flesh and drinking her blood, eliminating the vulgarity from the original peasant tale and providing behavioral models for children to reinforce the prestige and superiority of aristocratic values.

The tale changed again in the hands of Jacob and Wilhelm Grimm. Their 19th century German version of the tale, known as “Little Red-Cap,” maintained Perrault’s red hood, but erased all traces of the erotic playfulness, placing the action in the service of teaching lessons to the child inside and outside of the story. Compared to “The Story of Grandmother,” the heroine in “Little Red-Cap” is transformed into a naïve, helpless, and pretty little girl who must be punished for disobeying her mother’s orders: “Set out before it gets hot, and when you are going, walk nicely and quietly and do not run off the path” (Grimm 139).

The wolf in “Little Red-Cap” is sent to teach the little girl a lesson about repressing her own sexuality and the huntsman, who saves Little Red-Cap in the end, is sent to teach the girl about the dominance of the male patriarch. These changes reflect the educational nature of German 19th century tales, emphasizing Christian morals and virtuous behaviors. Furthermore, these lessons that the Brothers Grimm infused into their version of the tale were designed specifically for the instruction of children, rather than for the entertainment of adults.

There are many other versions of Little Red Riding-Hood being told all around the world. They are presented in many forms: through oral tradition, literature, and performance. However different these forms are, there is always a message to be considered. The tale of Little Red Riding-Hood has been rejuvenated through the efforts of many writers who have contested the disciplinary edge to the story and challenged its basic assumptions in an attempt to reflect the social currents of their time, while retaining the caution of young girls entering adolescence. 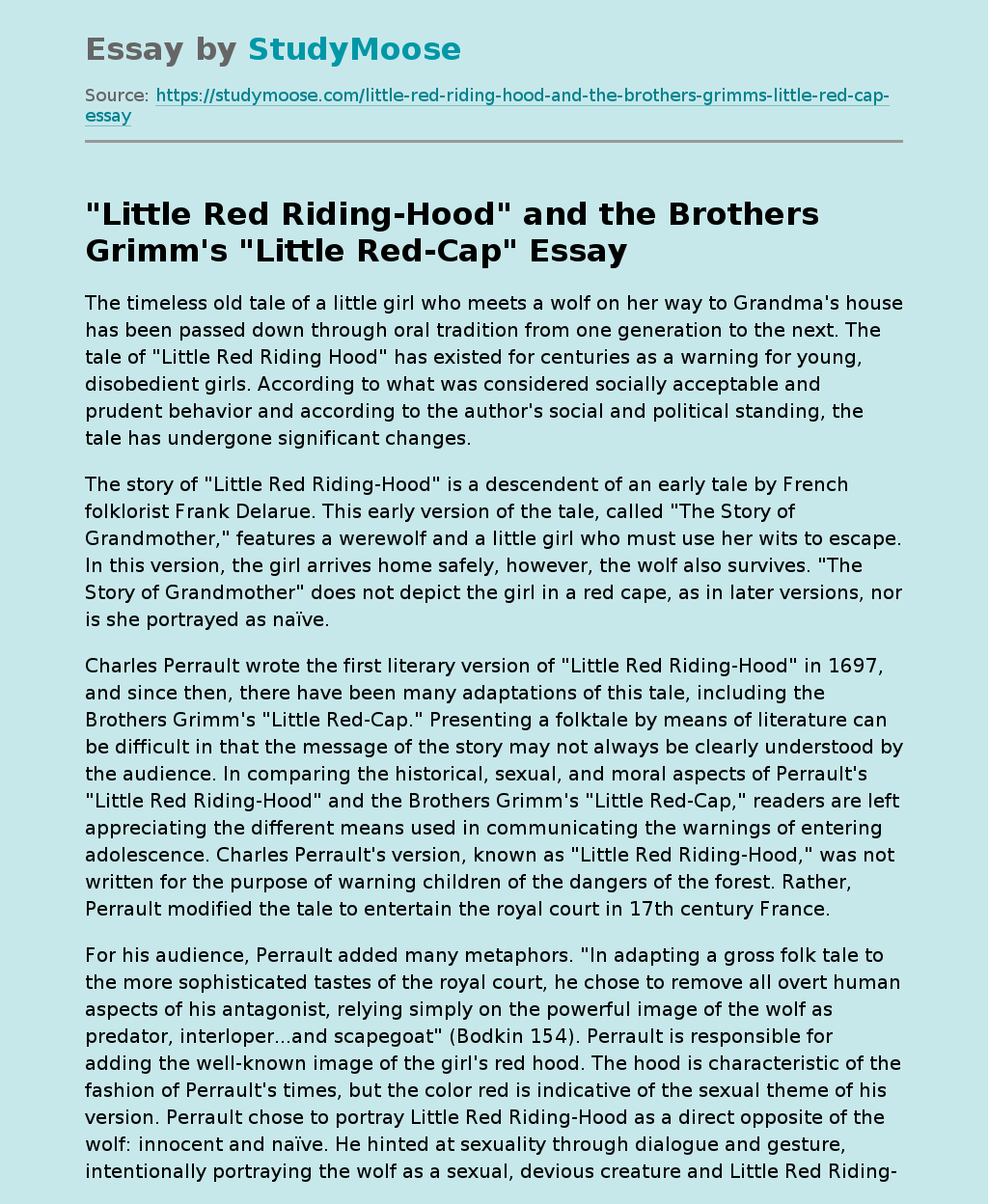