Throughout the world fairytales have been created and passed on to future generations, usually though oral practice; up until the late 1800’s were these fairytales written down. Each tale narrated the actions of its characters while embedding a lesson to help young children develop the right morals to grow into mature adults. One tale in particular teaches children to always obey their parents, though it also portrays a much more controversial idea. Through the story we can see a constant power struggle created by gender stereotypes and social constructs, between men and women.

Little Red Riding Hood was originally created to entertain young children during the late 1600’s. Since then different versions have been written, portraying men and women in different angles. Each tale provides its own metaphors and symbolism; although never deviating from the original base-story.

In each version of Little Red Riding Hood she comes to a confrontation with a “wolf” who manipulates and tricks her into his/her trap.

In James Thurber’s version of Little Red Riding Hood, The Little Girl and the Wolf, Little Red isn’t the sweet little girl she is made out to be. “So the little girl took an automatic out of her basket and shot the wolf dead” (Tatar 17).Little Red is not so helpless anymore. The story was told in a cautionary tone. Little Red was made to look sinister as a warning to males. Little girls are no longer thoughtless. No male was going to get the best of her, she rebelled against her own status quo and came out on top.

It does not follow contemporary ideas of how a young girl should act, making her actions all the more radical. Little Red Riding Hood also emphasizes the masculinity of men by linking them alongside the wolf, where you see they share similar characteristics. By highlighting both characters we see the similarities and identify that the huntsman is as much a wolf as the wolf is the huntsman. The wolf not only represents recklessness but is a metaphor. Bruino Bettelheim comments that the wolf is a “stand-in for male seducers who lure young woman into their beds” (Tatar 4) Perrault’s version of Little Red Riding Hood of the same name, has many indications of sexual venture by the wolf. “.. Climb in bed with me” (Tatar 12) or “… took off her clothes and climbed into the bed” (Tatar13) both quotes from the story send an insinuation of sexual ambition coming from the wolf.

Who would possess such ambition but a man? The wolf and the huntsman are comprised of similar animalistic instincts; although the wolf is more true to his nature since he has nothing to hide. The Brothers Grimm version of Little Riding Hood portray the huntsmen as a hero after he saves Granny and Little Red from the wolf, both were freed from the wolf’s belly. Before there rescue the huntsman was minding his business stopping through the forest. Only after he suspects the wolf’s involvement does he enter the house to save the women. As the wolf slumbers with Little Red and Granny in his belly does the huntsman takes action. “I’ve found you at last, you old sinner, he said. I’ve been after you for a while now” (Tatar 14). From few words you have an indication that the huntsman has been on odds with the wolf. Once the wolf has been killed, his pelt is taken by the huntsmen. Showing the rivalry among men. Men are like dogs and always battle out for dominance, to show who is strongest. Why would the huntsman compete with the wolf if he is only an animal? The wolf is just another male who is threatening the huntsmen masculinity.

The wolf is given human emotions and abilities that he can use for his advantage. Similar to the huntsman he must hunt in order to survive; just another hunter that happened to be at the wrong place and sleeping at the wrong time. In the same version we also see the wolf’s jealousy towards a woman’s natural ability to reproduce. Denied by the gender, men are unable to continue their lineage on their own; having to rely on a woman’s ability for childbirth for the continuation of their species. Towards the end of the story Erich Fromm acknowledges that the wolf had attempted, “to play the role of a pregnant woman, having living things in his belly” (Tatar 7). The Brothers Grimm makes the wolf appear pregnant when resting in the cottage, its swollen stomach filled with Granny and Little Red. After the rescue, Little Red places the stones in the wolf’s belly, to punish the wolf for his jealousy. The stones not only were placed in the wolf as punishment for trying to eat them but as a symbol of sterility. (Tatar 7) The action of placing the stones in the belly evermore mocking the wolf that he will never be able to become pregnant and produce life. In The Story of My Grandmother the wolf is used as a metaphor to show just how possessive a man can be.

“The wolf tied a rope made of wool to her leg and let her go outside” (Tatar 10). The wolf initially ties Little Red to plum tree in attempt to keep her from running away when she asks to relieve herself in the woods. By tying Little Red to a plum tree she was then seen as the wolf’s property; he saw fit to protect her by keeping her on a leash, taking away her freedom. In peculiar the tree in which Little Red was tied to was a plum tree. It’s interesting how Paul Delarue specifically identified the tree in which Little Red was tied to.(Tatar 11) Symbolically the plum tree represents spring championing over winter, additionally meaning courage and virtue triumphing over tribulations. In this case the tribulation is escaping the clutches of a sexual predator bent on taking innocence. Little Red was able to get away after she went into the forest. By disobeying the wolf she claimed her independence from a man, which was very hard to do. Independence and strength do not only dwell in masculine bodies.

In The Chinese version of Little Red Riding Hood switches the roles of the hero and victim. GoldenFlower and The Bear by Chiang Mi changes Little Red into Goldenflower, a courageous and cunning young girl. She out smarts her wolf which happens to be a bear in this story. Noting that GoldenFlower had a brother would make you assume he would be the one handling the bear. There is a scene where the bear wants to enter the house. “Brother was happy.. Shouted: ‘Sister open the door! Granny has come!’”(Tatar 19). Goldenflower’s brother fell quickly into the bears trick. He never doubted his grandma would ever turn out to be a bear. Believing the lie because he was afraid. This boy brings down the image of the masculine male.

Here he is simply a boy, who is afraid and incompetent. The male image was diminished while making woman appear strong and confident. Reversing the roles only emphasizes how both men and women are unalike. Every version of Little Red Riding Hood has been influenced by the people and ethnics surrounding it, as well as the time period. Its morals and lessons still can be used by the current generation since it not only touches the topic of feminism or innocence in childhood, but on the issue of social order. The constant struggle between men and women will perhaps never die down because there will always be complications. A power struggle will always be in motion. 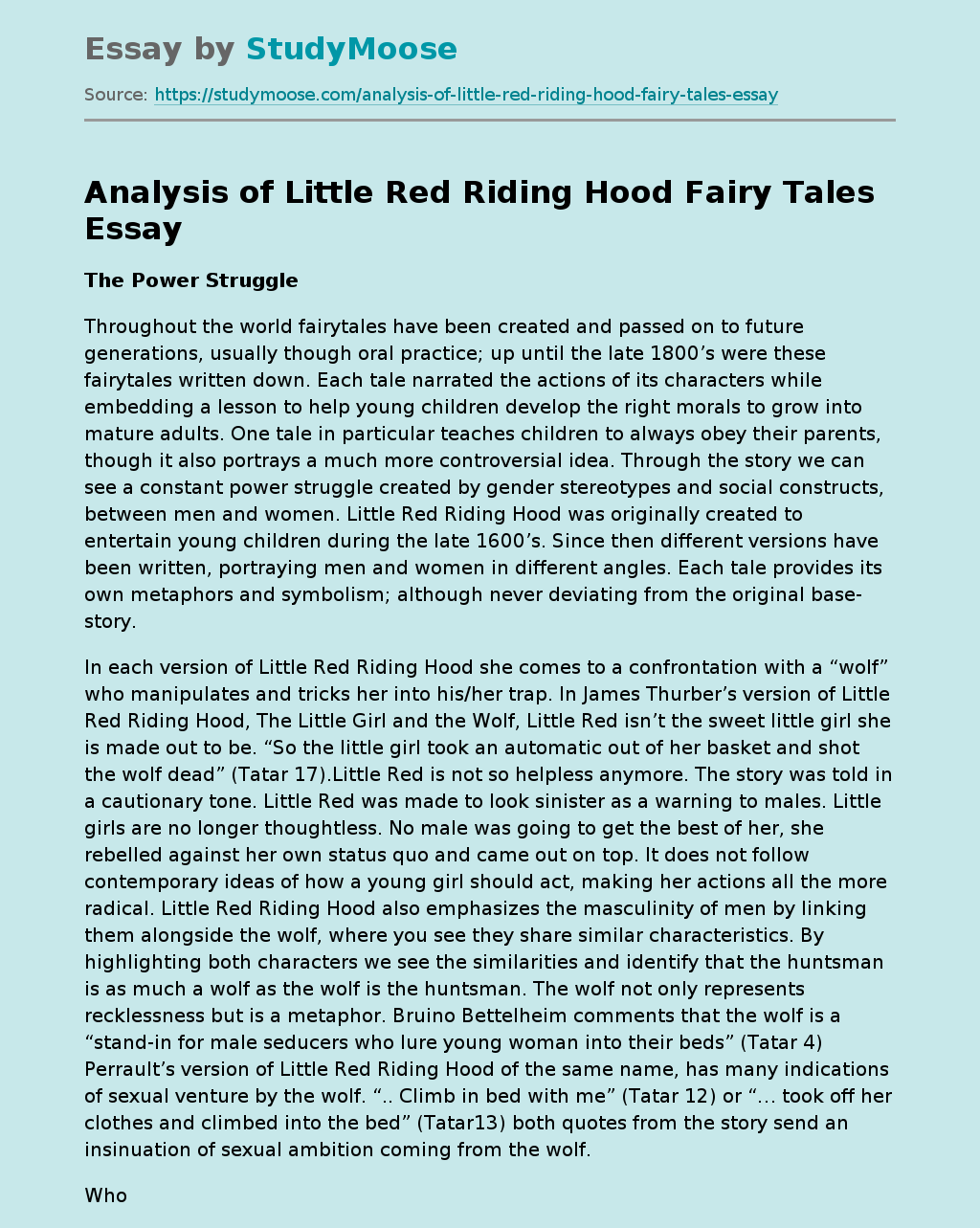