It was December 2001.”The most wonderful time of the year”. A special holiday season for my family because our grandparents were coming to visit us from Argentina after two years of our departure. When my parents decided to leave our country in search for “better opportunities”, I was three and my brother was six. Between suitcases and planes we were excited about the coming adventure. We did not know at that time, about distances or leaving family behind. Then I realized that I missed my grandpa so much, calling him every week was not enough.

Turn in your highest-quality paper
Get a qualified writer to help you with
“ An Unforgettable Holiday: Little Red Bike ”
Get high-quality paper
NEW! AI matching with writer

It was going to be a very special holiday for me. My dearest grandpa was coming. He taught me to ride a little red bike before I was three. He would run next to me up and down the block, making sure I was not going to fall from it. He would visit every day after work and bring me and my brother a little something, may be a candy or a small chocolate and one yellow flower for my mom, which he would take from some garden on his way to our home.

I would take long naps with him on our Sunday visit to his house and then he would drive us religiously to the park and play soccer before dropping us at home. This was going to be an unforgettable holiday, and I did not know at that time, it was going to be the last time I would spend with him. And the time came for us to be together again.

The instant I saw him, I hang to his neck and did not stop talking. He looked older and thinner than what I remember but I was so delighted to be in his arms again. My words were coming out like a waterfall. Mixing English and Spanish I told him about school, my friends, and afternoons at the pool and all my new toys. He was not talking a lot or was I talking too much? Beyond happiness, I was just a child. I barely realized how much he had changed. How sick he already was. What could be merrier than Christmas with my grandpa! And under the tree on that Christmas Day, my brother and I found two beautiful bicycles. Mine was red.

And of course, Grandpa helped me in my first laps. But this time he could not run, though it was ok with me, I was soon pedaling all by myself. Grandpa still needed his nap, not me anymore. So I would wait for him very quietly, until he would wake up to take me for another ride around the block. This time, we took him to the park to kick some balls, but he would complain Miami was way too hot, he needed to sit down and watch us play. There is a saying that says: “all good things come to an end”. My grandparents went back to Argentina and I never saw him again. After a few months, he passed away. I still have the most terrific memories about my grandpa. I still have the now, “little red bike”. It is in a corner of the backyard, holding some pots with pretty yellow flowers. We all take special care of it, in memory of my Grandpa and that last unforgettable holiday. 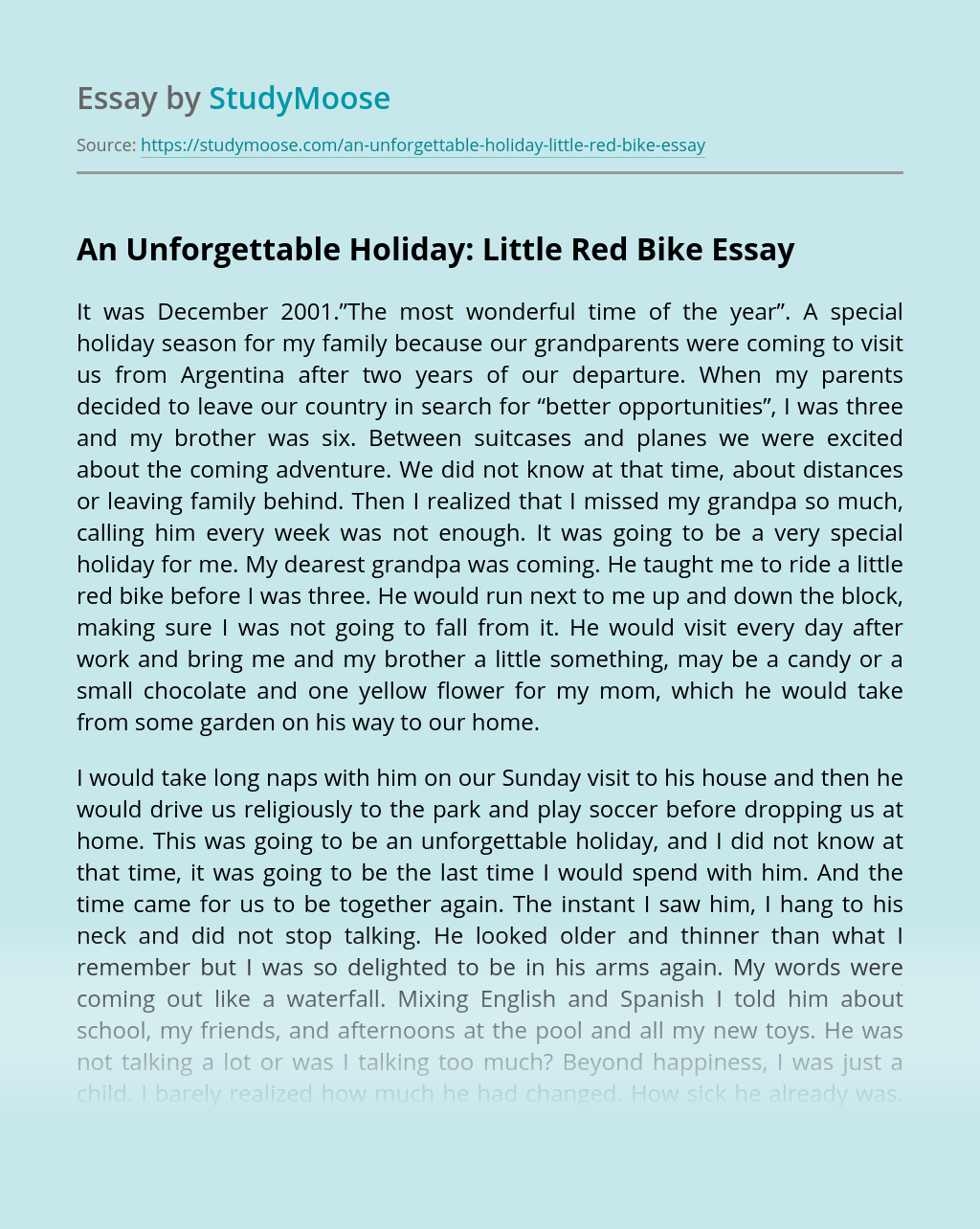 Turn in your highest-quality paper
Get a qualified writer to help you with
“ An Unforgettable Holiday: Little Red Bike ”
Get high-quality paper
Helping students since 2015
Stay Safe, Stay Original