But a more complex subliminal message exists as well.

Marxism is essentially the opposite of capitalism, “Marxism is the system of socialism of which the dominant feature is public ownership of the means of production, distribution, and exchange” (What is Marxism).

What this is saying is that there is no such thing as private property and that everybody publicly owns everything. Everybody, in theory, works and produces as much as they can and in return they receive exactly what they need. One of Marx’s greatest criticisms of capitalism is the oppression that workers have to endure.

Marx says, “Under capitalism, […] the workers, in order to support their families are paid a bare minimum wage or salary. The worker is alienated because he has no control over the labor or product which he produces” (What is Marxism).

Here Marx is saying that in capitalism, the workers are being abused. The abuse of workers is one of the main reasons Marx dislikes and distrusts the capitalist system. In The Three Little Pigs the first place symbolism is used to display a Marxist idea is after Browny, the first little pig, has built his house. When the fox comes along he sounds very nice and sweet but in reality he is a mean and nasty person, “He heard a soft knock at his door, and a gentle voice said, ‘May I come in, Master Browny? I want to see your beautiful new house. ‘Who are you? ’ said Browny, starting up in great fright, for though the voice sounded gentle, he felt sure it was a feigned voice, and he feared it was the fox […] ‘We shall soon see who is master here,’ and with his paws he set to work and scraped a large hole in the soft mud walls. A moment later he had jumped through it, and catching Browny by the neck, flung him on his shoulders and trotted off with him to his den. ” (The Three Little Pigs and other Folk Tales). In this particular scene the fox is symbolizing the upper class capitalist. 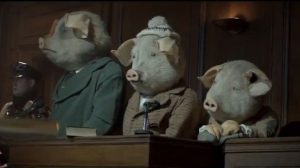 He seems nice at first when in reality, he is a mean, and deceitful person who wants only to use other people to accomplish what he wants. Browny however, symbolizes the worker who realizes that the upper class capitalist is no good, but can’t do anything to stop him. The next pig, Whitey, has almost the exact same encounter with the fox. He comes up to the door, tries to sweet talk her into letting him in and then when she doesn’t, he overpowers her and takes her away with him to his den. The next little pig, Blacky, has a very different encounter with the fox.

Blacky had made his house out of bricks so when the fox came up and tried to get into the house he couldn’t. After another attempt the fox resorted to climbing up on the roof and trying to go down the chimney, but, Blacky was prepared, “But Blacky very wisely had not put the lid on the kettle, and, with a yelp of pain, the fox fell into the boiling water, and before he could escape, Blacky had popped the lid on, and the fox was scalded to death. ”(The Three Little Pigs and Other Folk Tales).

This scene symbolizes how the worker, Blacky, can, and has to, stand up to the capitalist and stop him from abusing all the workers. The fox’s death however, symbolizes that even though the capitalists are more powerful, the workers decide that they are not going to tolerate any more abuse. Essentially, what the subliminal story in The Three Little Pig is trying to say is, the abused workers have to stand up and not let the upper class capitalists push them around whenever they please. In The Story of Three Little Pigs the subliminal message is somewhat darker.

The first little pig sets off and instead of building a house of mud he builds a house of straw. Again, like what happens in the first one, the wolf comes along and destroys the house. Here the wolf, like the fox, stands as a symbol of the oppression that workers have to undergo but also as something more, “The wild and destructive wolf stands for all asocial, unconscious, devouring powers against which one must learn to protect oneself” (Bettelheim). Here the wolf is not only a symbol for upper class capitalists but also anything that wishes to harm workers in any way.

However, this time the wolf does not just take the pig back to his den, instead he eats him on the spot, “He huffed, and he puffed, and he blew his house in, and ate up the little pig” (The Three Little Pigs and Other Folk Tales). This eating of the pig is symbolizing not just the oppression of the workers, but the complete destruction of their rights as well. The wolf then proceeds to go and do the same thing to the second little pig. However, when he tries to do the same to the third little pig he is thwarted. At first the wolf tries to blow down the third little pigs house of bricks, which he can not do.

This frustrated the wolf so he tries another course of action, “Then the wolf was very angry indeed, and declared he would eat up the little pig, and that he would get down the chimney after him. When the little pig saw what he was about, he hung on the pot full of water, and made up a blazing fire, and, just as the wolf was coming down, took off the cover, and in fell the wolf; so the little pig put on the cover again in an instant, boiled him up, and ate him for supper, and lived happily ever afterwards. ”(The Three Little Pigs and Other Folk Tales). 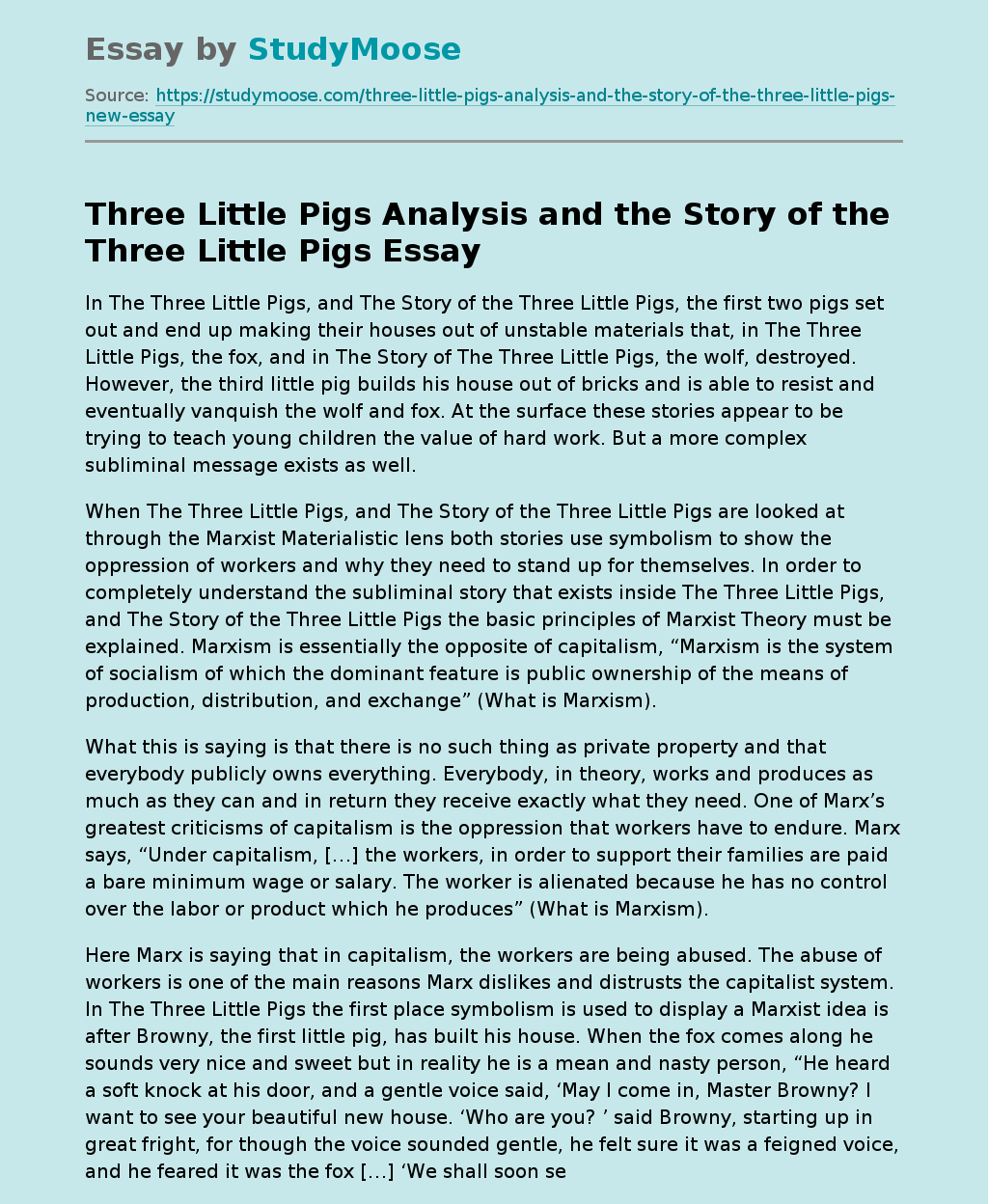