The story of Little Red Riding Hood has been around for years. Throughout the years this story has been told many different ways. The story began as a folk tale that European mothers and nurses told to young children. The fable soon came to the attention of Charles Perrault (1628-1703). He was a French attorney who turned into a poet, writer, and anthologist. He published one version of the story in a 1697 collection of fairy tales, which is a book that became a French juvenile classic.

Don't use plagiarized sources. Get your custom essay on
“ The Story of Little Red Riding Hood ”
Get custom paper
NEW! smart matching with writer

The story was soon revised by the Grimm brothers which is the version known today.

One day, her mother said, “Grandma is ill. Take her this basket of cakes, but be very careful. Keep to the path through the wood and don’t ever stop.

That way, you will come to no harm. Her mother plainly told her to follow the path to her grandmother’s house and never to stop; that way she can be safe. She disobeyed her mother by not staying on the path which will cause her to eventually meet the wolf, who is popular for playing the villain in most fables.

The author made her get off the path several times by causing distractions such as butterflies which is a good because is shows no matter how great temptation is one should follow a mother’s orders. When she gained the knowledge that she disobeyed her mother, she said, “I must find the path and run away from here! ” She gets back on the path and runs into the seemingly nice wolf. The wolf seems nice because of the pleasant conversation he had started with her. He asked, “Where are you going, my pretty girl, all alone in the woods? ” “I’m taking Grandma some cakes.

She lives at the end of the path,” said Little Riding Hood. Not only did Little Red Riding Hood talk to a complete stranger, but she told him where she is going. That leads towards her grandmother getting eaten by the wolf. When the grandmother is eaten it gives off a shocking surprise to the audience to point where they cannot wait to hear the rest. When Little Red Riding Hood arrives, a famous dialogue follows: “What great arms you have, grandma! The better to embrace you, my child. ‘What great legs you have! The better to run with, my child. What great ears! The better to hear with.

What great eyes! The better to see with. What great teeth! The better to eat you with. ” At this particular point in the story is where the story gets extremely interesting and grabs the audience’s full attention. The wolf eats Little Red Riding Hood and falls asleep. In Perrault version this was the end of the story. He was severely criticized for choosing a gruesome ending, but the Grimm Brothers added their ending to the story. A hunter came along and killed the wolf. Then the hunter sliced open the wolf’s stomach and freed the grandmother along with her granddaughter, Little Red Riding Hood.

The Grimm Brother’s ending made the story have more justice, but was just as gruesome, if not more. In the end Little Red Riding Hood did disobey her mother, but she later learned her lesson even though it was in a unfortunate manner. The story is short and simple, but most importantly it teaches children about listening and talking to strangers. It can be told to any age group but read by elementary kids and up. The authors were very creative and imaginative. The fairy tale of Little Red Riding will continue to be told for generations to come. 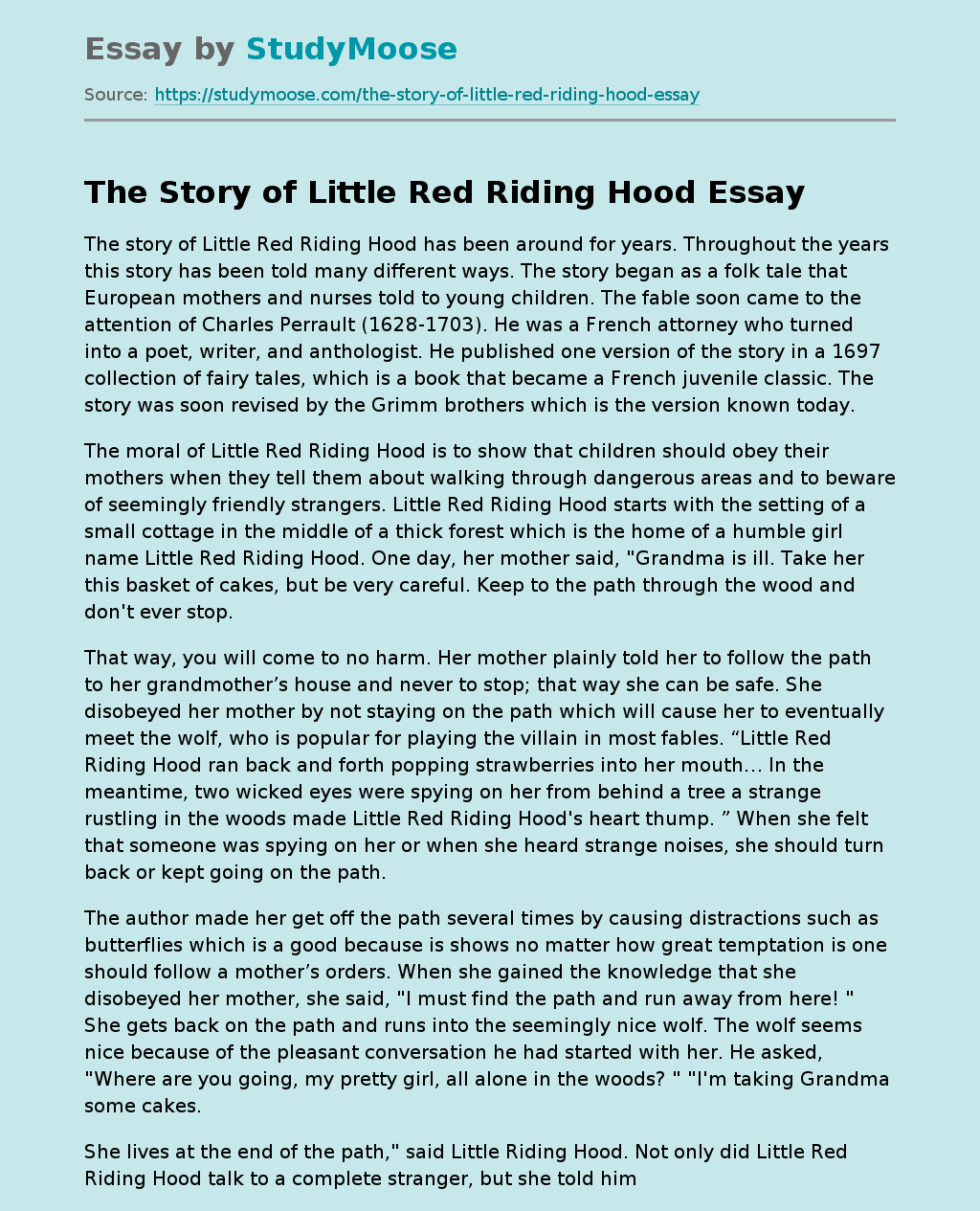