The Little Red Hen Tells All

The Little Red Hen Tells All by Margaret Atwood is a different take on the well-known children’s story The Little Red Hen. In Atwood’s version, the hen reveals her thoughts and feelings towards her work, her peers, and the roles expected from her by the society as she made th bread from a grain of wheat. The story uses metaphors of the how women are treated in a patriarchal society, specifically in the workplace. The first paragraph of the story tells how problem arises from everyone wanting to have the piece of bread made by the hen.

Don't use plagiarized sources. Get your custom essay on
“ The Little Red Hen Tells All ”
Get custom paper
NEW! smart matching with writer

However, the deeper cause of the problem is revealed in the thoughts of the hen, “It’s not easy, being a hen. ” It suggests that the real problem encountered by the hen is associated with her being a hen (or a woman). A hen that was able to make the bread that no other animals have. The moral lesson of the story of the red hen, simply put, is to work hard, be productive and reap the rewards of your work as you deserve.

However, in Atwood’s story, the little red hen is not naive. She knows that is not always true, that for a woman it is quite different.

There is a different expectation from her because of her sex, because of the stereotyped role of women in society. As the hen revealed: “You know my story. Probably you had it told to you as a shining example of how you yourself ought to behave.

Sobriety and elbow-grease. Do it yourself. Then invest your capital. Then collect. I’m supposed to be an illustration of that? Don’t make me laugh. ” It is very effective that this story is based on a well-known children’s story. The hen says to the readers, “You know my story. ” It is true.

The readers are familiar with the little red hen in the children’s story. However, this line could really refer to the awareness of the readers regarding the challenges, oppression, and discrimination faced by women in the work. That these things really do happen. “There are lots of grains of wheat lying around. Keep your eyes to the grindstone and you could find a grain of wheat, too. ” Today, there are increasing women in the labor force. In 2009, women made up 46. 7% of the labor force (Bureau of Labor Statistics, Current Population Survey).

Even though the percentage of working women are almost the same that of men, there is till a big difference when it comes to their rank and positions. There is discrimination in women having top positions in work. In a patriarchal society, women having power is unwanted. In the story, the hen was ignored as she worked her way up until she reached her goal, and deservingly had the bread that no one else have. As expected, all the other animals want to take part of the hen’s success. They all wanted the bread. As the hen refused to share it with them, they were outraged. It was unacceptable.

They whined, they petitioned, and they accused the hen of selfishness (which is ironic). “Every single one of them, it seemed, needed that goddamn loaf of bread more than I did. ” This shows the discrimination towards the hen (women). Men feel that they are more qualified and deserving than women when it comes to climbing up towards the top position. In the children’ story, the hen did not give-up the bread. She got what she deserved from her hard work. However, in Atwood’s story, ending is changed. In Atwood’s version, there is a touch of reality, of what really happens in real life.

The contrast between the two stories is very effective in emphasizing the theme of Atwood’s story. The little red hen has accepted what is expected of her, there is a resignation in her statement, “I know what the story says, what I’m supposed to have said: I’ll eat it myself, so kiss off. Don’t believe a word of it. As I’ve pointed out, I’m a hen, not a rooster. ” Atwood’s version of the well-known children’s story, the little red hen really tells all. The hen reveals the thoughts and the despair of the women in general, towards the oppressive patriarchal system.

The Little Red Hen Tells All. (2016, Sep 23). Retrieved from https://studymoose.com/the-little-red-hen-tells-all-essay 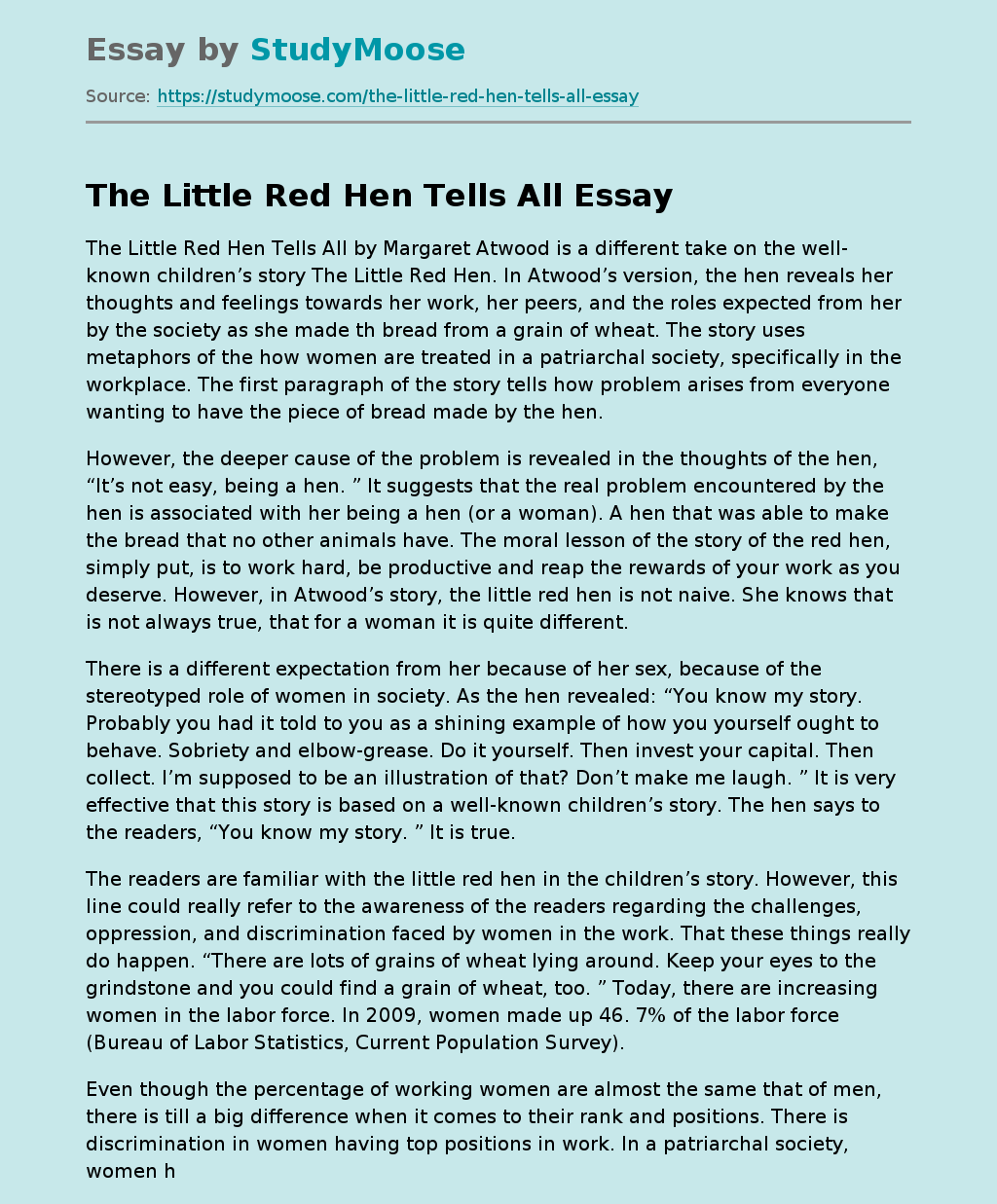