What did Arthur Andersen contribute to the Enron disaster?

Assistance! Arthur Andersen assisted Enron in deceiving stakeholders by revealing ways to generate false profits and hide losses through the development of Special Purpose Entities (SPEs). Enron’s consolidated financial statements did not depict or clearly give investors an accurate assessment about the company’s operating and financing activities. Generally Accepted Accounting Principles (GAAP) were not observed nor enforced; Arthur Anderson okayed/ condoned Enron to issue shares “as an increase to shareholders equity” through the use of notes receivables.

Don't use plagiarized sources. Get your custom essay on
“ Unethical Practices of Arthur Anderson ”
Get custom paper
NEW! smart matching with writer

One should note, that only with the use of cash could this “transaction” be deemed valid. A lack of internal controls within the company and a conflict of interest were present and in uniform, unfortunately, this information was never made known to Enron’s audit committee.

Arthur Andersen added to Enron’s demise by shredding company audit documents, this act alone confirmed all suspicions of Arthur Andersen’s consulting and auditing deficiencies; AA was convicted of obstruction of justice; a once prestigious name known for its quality accounting is now irrefutably tarnished.

Ultimately, Arthur Andersen helped to devastate investor confidence in the financial markets by abandoning its legal duty to public shareholders and by favoring the interests of its clients. i.e. Enron, WorldCom, Waste Management, and Sunbeam.

What was the prime motivation behind the decisions of Arthur Andersen’s audit partners on the Enron, WorldCom, Waste Management, and Sunbeam audits: the public interest or something else? Cite examples that reveal this motivation.

Revenue! Money was clearly the prime motivation behind the decisions of Arthur Anderson’s audit partners. However unlikely, Arthur Anderson managed to push company boundaries and imploy tactics of a blind eye and a deaf ear within companies such as Enron, WorldCom, etc. With that being said, one should not fall under the impression that AA acted alone or solely arranged for these occurrences i.e. Enron and WorldCom bankruptcies to take place; clients were also at fault! According to Barbara Ley Toffler, “When Berardino (AA’s CEO) would get up at a partners meeting, all that was ever reported in terms of success was dollars. Quality wasn’t discussed. Content wasn’t discussed. Everything was measured in terms of the buck… Joe was blind to conflict.

He was the most aggressive pursuer of revenue that I ever met” (Brooks, L.J. (2007). In addition, one should note that there were warnings of a disaster waiting to happen; why did AA leaders allow Berardino to make such crucial “sensitive” decisions? Were they not aware that Berardino, had every motive to incur revenue no matter the cost? According to the text, Berardino “was most likely to subject to the influence of the client” (Brooks, L.J. (2007). Because AA chose to ignore obvious red flags within internal controls, the company faulted and the big 5 soon became known as the only 4. Some observers even speculate that company divisions were at competition amongst themselves specifically AA auditing and consulting divisions. Why should an auditor make decisions in the public interest rather than in the interest of management or current shareholders?

An auditor’s loyalty and focus must be directed towards meeting and serving the public’s interest rather than the interest of management and/or current shareholders for both legal and ethical reasons. It would be unethical to partake in any kind of manipulations, falsify information, and to purposely mislead investors for personal gains. Thankfully, the Sarbanes and Oxley Act manifested itself right after the Enron and WorldCom schemes. Finally, responsibility is not limited to only auditors; management and the board of directors will be held accountable as well; internal controls will finally be enforced!

Section 302: requires senior management to certify the accuracy of the financial statements. Section 404: requires both management and auditors to establish internal controls and reporting methods on the adequacy of those controls. (Investopedia.com)

In short, by thinking short-term and not prioritizing the public’s interests over one’s own selfishness could have detrimental effects on our economy and irreversible effects on the livelihood of many stakeholders. Consider how many jobs will be lost, how retirement plans that were meant to secure a family’s future will suddenly vanish, how bad our economy will suffer, companies; remember the domino effect! Be warned that these acts of misconduct will not go unpunished; imprisonment and/or fines will be exercised!

Unethical Practices of Arthur Anderson. (2016, May 11). Retrieved from https://studymoose.com/unethical-practices-of-arthur-anderson-essay 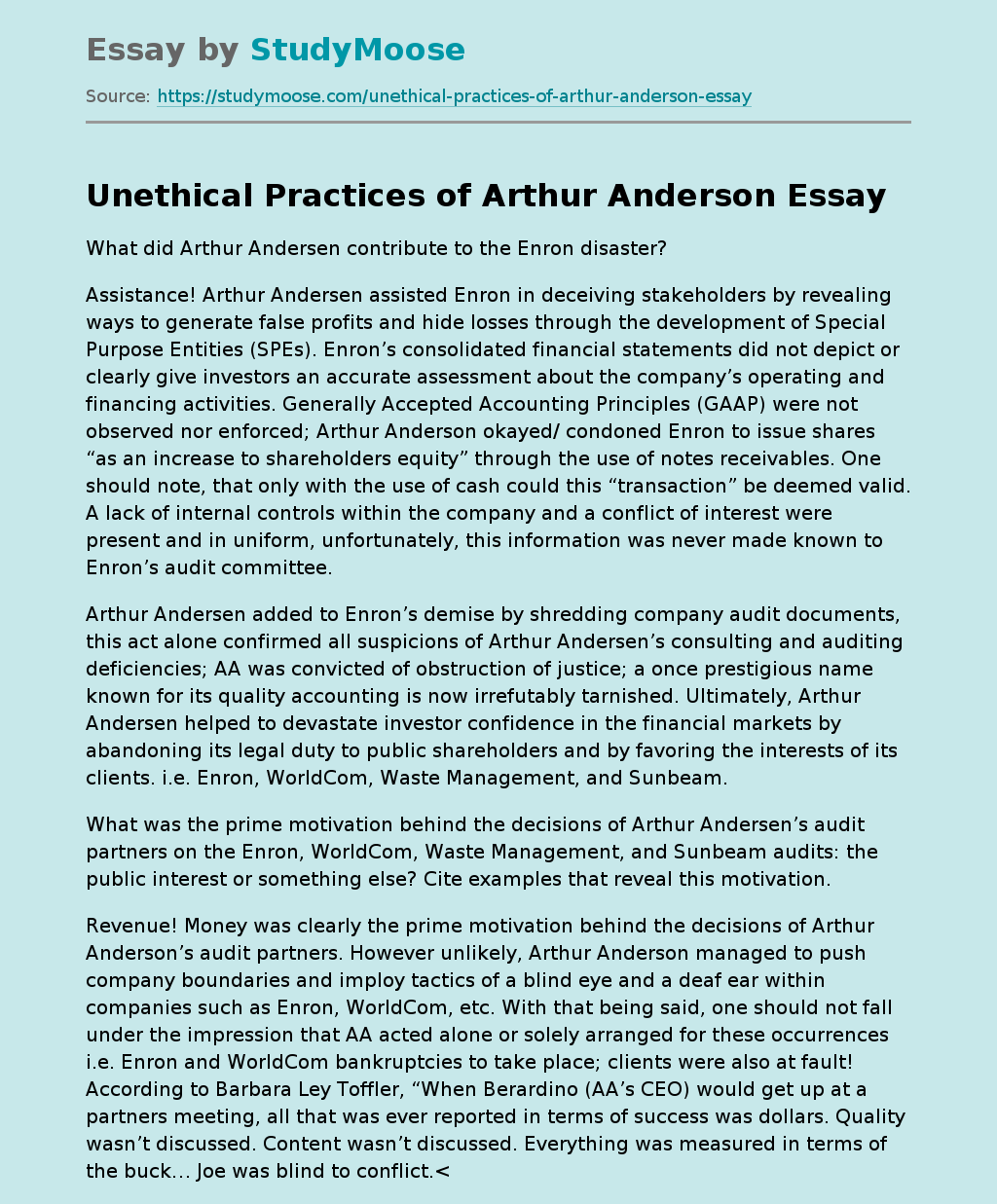