The King Arthur legends include many epic hero archetypes. Arthur and other knights of the round table embody these epic hero qualities. An epic hero is meant to be a role model. Some of the key qualities of this epic hero archetype include bravery, honor, not fearing death, amazing physical strength, and putting other’s welfare before their own.King Arthur is clearly an excellent example of the epic hero archetype because of his chivalry. Chivalry is defined as the sum of the ideal qualifications of a knight, including courtesy, generosity, valor, and dexterity in arms (Chivalry).

Don't use plagiarized sources. Get your custom essay on
“ The King Arthur legends include many epic hero archetypes Arthur and other ”
Get custom paper
NEW! smart matching with writer

An example of Arthur’s chivalry was when he and Sir Accalon were tricked into battling each other by King Arthur’s half-sister Morgan Le Fay. Sir Accalon was given Arthur’s sword Excalibur by Morgan Le Fay to to use during the fight in an attempt to kill king Arthur. Sir Accalon was winning the battle and had greatly wounded Arthur, Accalon then said to him You are finished, helpless and lost.

I don’t want to kill you. Surrender and give up the cause (Steinbeck 115). Arthur had promised a king that he would fight this battle for him and he refused to go against his own word, so he replied with I can’t. I promised to fight as long as I had life. I would rather die with honor than live in shame (Steinbeck 115-116). Sir Gawain demonstrates his chivalry in the story of Sir Gawain and the Green Knight. In the story, the Green Knight rides to Camelot and entered the room in which Arthur and his court were in.

The Green Knight presents a challenge to them and says I lay down a challenge: if a person here present, within these premises, is big or bold or red-blooded enough to strike me one stroke and be struck in return, I shall give him as a gift this gigantic cleaver and the axe shall be his to handle Sir Gawain puts his neck on the line, literally, by volunteering himself to do this challenge in order to uphold the reputation of Camelot and defend his king. This is a true show of chivalry which fills this part of the epic hero archetype. In Sir Gawain, Sir Gawain epitomizes this first blooming of Arthurian chivalry, and the reputation of the court rests upon his shoulders (The Pearl Poet 135)Courage is defined as the quality of mind or spirit that enables a person to face difficulty, danger, pain, etc., without fear; bravery. King Arthur showed his courage in lots of ways and he acts with the main belief that courage is the ability to judge that something else is more important than the fear; organizing his priorities in a different way. For example, when Arthur noticed that there was something happening between Launcelot and Guinevere, he chose to let it pass and simply warn them indirectly instead of being forward and claiming that the two were in love. Arthur did this because he realized that if Camelot found out, that Guinevere would have to be beheaded as stated in the laws of adultery and Launcelot (being the enamored knight) would surely go against the King’s decision and end up creating a division in the realm.Arthur risked his life on many occasions for the greater good, showing a great deal of self-sacrifice. Self-sacrifice is defined as sacrifice of one’s interests, desires, etc., as for duty or the good of another. Arthur was drugged by some damsels on a boat that he and his other two knights boarded when they were seeking shelter. Arthur woke up from his drugged sleep on the floor of a dungeon with other prisoners. He was told that he had the opportunity to fight for Sir Damas, and in exchange he would be granted his freedom. The damsel speaking to Arthur said If you will fight for my lord you will be released, but if your refuse, as these other fools have, you will spend the rest of your life here (Steinbeck 112). Arthur replied to her, saying It is a strange way to get a champion, but for myself I would rather combat with a knight than live in a dungeon. If I agree to fight, will you release these other prisoners? (Steinbeck 112). The way that King Arthur took the throne was unworldly. He passed a mystical and supernatural test made by Merlin and becomes the King. When Arthur’s father, King Uther, died there was lots of conflict over who would be the next king. Merlin used his magic to set a sword in a stone. Engraved on the sword, in gold, were these words: “Whoso pulleth out this sword of this stone is the rightwise born king of all England (Malory). There were many men that attempted to pull the sword from the stone, but all of them failed except one. When it came to be Arthur’s turn he stepped up and, to everyone’s surprise, he succeeded. Following this miraculous event, he was crowned as King. Another example of superhuman was when Lancelot was able to take on 12 different knights in a battle and succeeds in killing all of them. Lancelot was caught with Queen Guinevere in her chamber and the knights attempted to kill him. Lancelot at first only let one man in at a time and Lancelot struck him in the head, and he fell to the floor dead. Then Lancelot quickly shut the chamber door and armed himself with the knight’s armor. Lancelot finally opened the chamber door to allow all of the knights in, and he killed them one by one. After killing all of the knights, he looked to Guinevere and said Madam, now wit you well, all our true love is brought to an end, for now will King Arthur ever be my foe. And therefore, Madam, and it like you that I may have you with me, I shall save you from all manner adventurous dangers (Malory 334).There are many Christian elements in the Arthurian Legends. Arthur is viewed as a kind of Christ figure. Bedivere is Arthur’s companion when he is dying. Bedivere was given a similar role to that of an apostle. He had been Arthur’s second-hand man since the beginning of Arthur’s kingship. Bedivere is now the only knight who stays by Arthur’s side until the end; therefore, you would expect Bedivere to be loyal to Arthur. However, in the Bible even Saint Peter denied Christ when Christ was arrested (Matt 26:69-75), and Bedivere treats Arthur in a similar way.Peter’s denial of Christ is essentially a lie. Likewise, Bedivere lies to Arthur when Arthur asks him whether he threw Excalibur into the lake. Rather than toss away Excalibur, Bedivere decides to keep the sword because of its material value. In the gospels, Judas was willing to deceive Christ for thirty pieces of silver. Bedivere was also willing to defy his friend and king for a material possession. When Arthur realizes that Bedivere had lied about throwing the sword back into the lake, he asks Bedivere to return and this time, faithfully, to ca out his orders.

The King Arthur legends include many epic hero archetypes Arthur and other. (2019, Aug 20). Retrieved from https://studymoose.com/the-king-arthur-legends-include-many-epic-hero-archetypes-arthur-and-other-essay 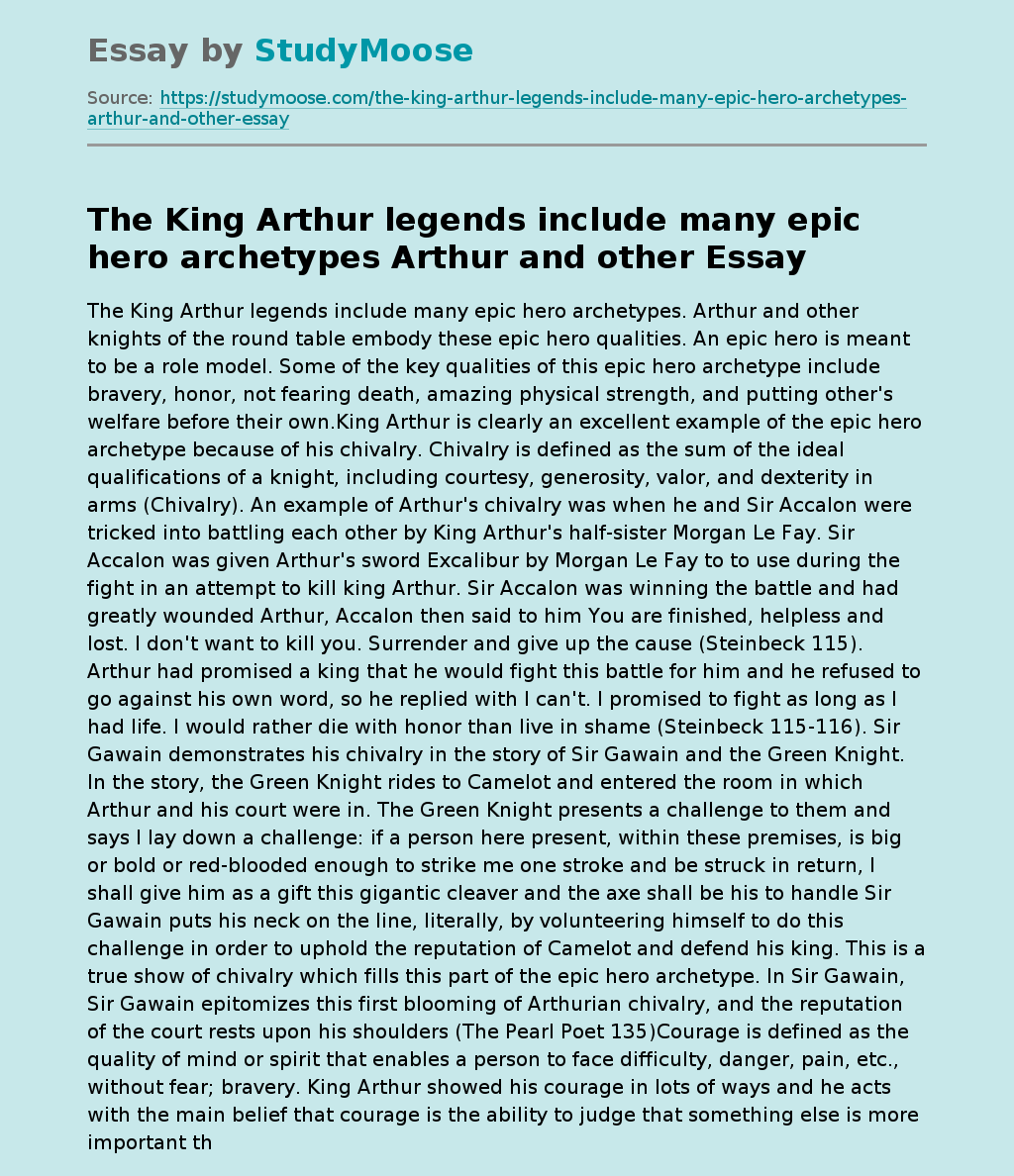