Like any other culture, ancient Arabs believed in demons, devils and the like, or at least they had stories about these things whether or not they believed those stories were true. Like everybody else they had their own mythology. Some of these stories are not really famous even for native speakers, like the story of how the rooster lost its ability to fly, or the legend which states that a very long time ago everything was able to talk; And some other stories are well-known (at least for those who DO read) like the ogres and poetry Genies.

Don't use plagiarized sources. Get your custom essay on
“ Arabic Mythology ”
Get custom paper
NEW! smart matching with writer

Arabs have a long-forgotten term which says “when everythingQ was talking” to describe something that happened a long time ago, especially in the pre-historic era. The root of this term is that ancient Arabs believed that everything -everything including animals and rocks- had the ability to talk at one point in history. And a lot of Arabian legends took place at that part of history.

One example of this is the story of how did the rooster lost its ability to fly. The story goes like that: the rooster and the crow were drinking together until they finished all the drinks they had.

So the crow told the rooster that he would bring more drinks and food if he gave him his wings and the rooster agreed. Needless to say, the crow never returned them and that is why the rooster crows every morning. He is calling the crow at the same time he took his wings.

Also there are some stories about heroes like “Ta-ab-ba-ta_Sha-run”, a real man who became a legend because of all the stories that were made up about him. He was described as “The fastest man when he run, and the strongest when he fights. His spear when thrown is like winter’s wind…etc” and he had so many encounters with demons and ogres in the desert. One of these encounters gave him his name when he fought an ogre bare-handed and killed it in “Raha-Bitan”. Then he carried it to his people under his armpit so they gave him his name which means “the one who carry evil ender his armpit. ” Unfortunately he was a thief in a lot of stories.

When talking about pre-Islamic Arabs you can consider the demons and the Genies to be the same. Genies were famous as excellent poets, and Arabs believed that every human poet had a Genie friend who inspires him with verses, even if he didn’t know about it. The genie is called “Ra-Ei, this word is driven from the verb ‘to see’ and ‘realizing what is behind the seen’. And from a noun mean seeing the future – or predicting it – ether in real life or a dream that turns true. When you talk about a poet and his genie you say that the poet is the Genie’s “Elf” and the genie is the poet’s “Ra-Ei”.

Elf is a word driven from “Elfah” which means a close relationship or feeling comfortable with a person or a thing that you get used to. Also some say that the Genie is born with you and you are stuck together forever, while others said that you do not born with a Genie but you can have one later. People said that the Genies come from a valley named “Abqar/Abkar” and their master is setting under “the poetry tree”, the root for all rhythms and verses in the world. It is said that you will become a poet if you sleep in that valley for one night and you will meet your genie.

All poetry Genies belong there even if they didn’t actually live there. A genie doesn’t necessarily need to be physically near his human friend to inspire him with verses so some Genies decide to stay there. Some famous poets claimed that they know their Genie and gave him a name, and some of them said that they met their Genie personally. Like ‘Abu-Nawas’ and ‘Al-Faraz-daq’ who both claimed that the head Genie is their “Ra-Ei”. Nowadays, we know that almost all mythologies are wrong, but that is not a reason to forget them because the value of mythology does not lay in its veracity but in its role as a part of history and culture. 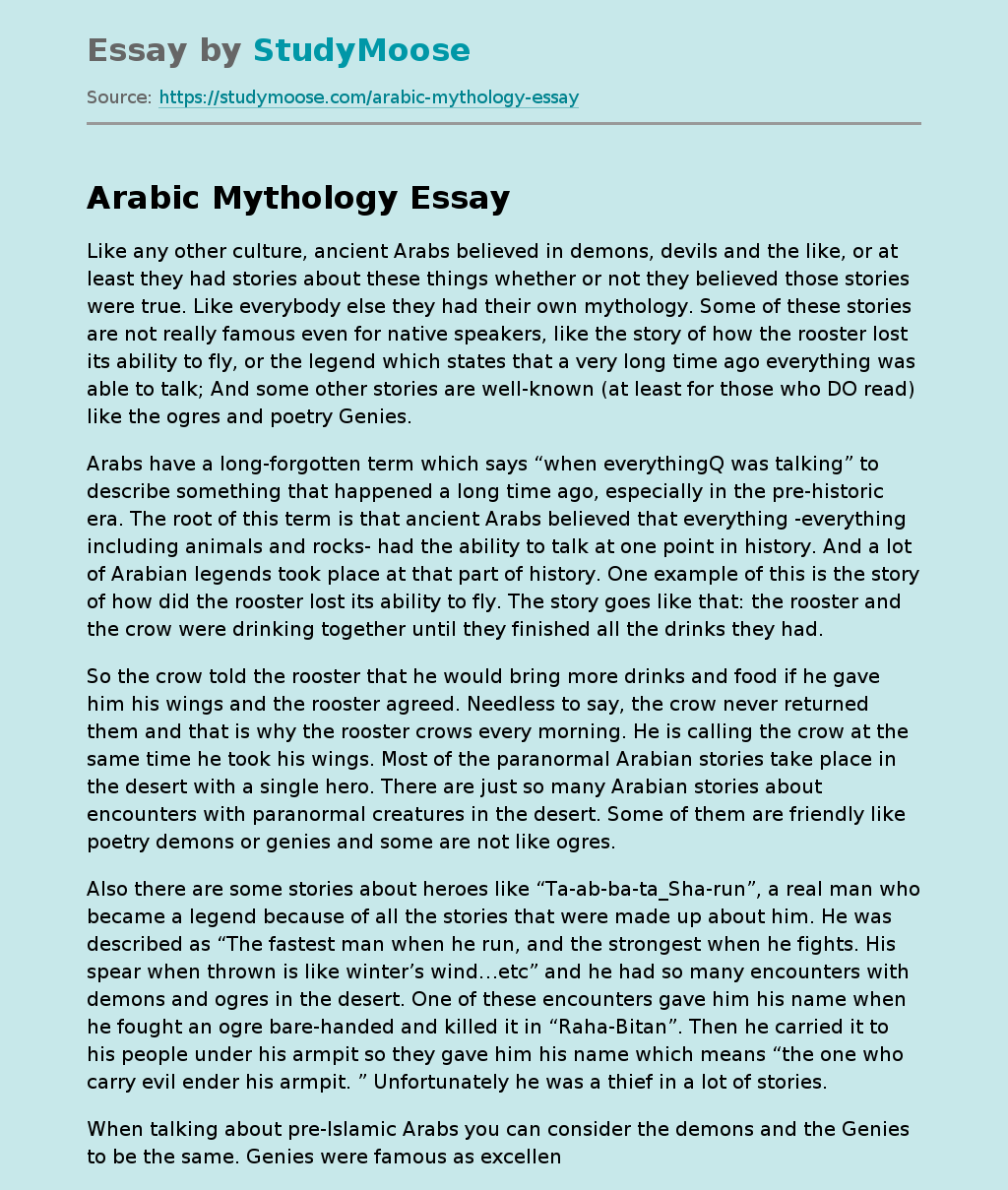