Melanesia is one of the three pacific region (Melanesian, Micronesia and Polynesia) in the southwest of the Pacific Ocean, consists of many different islands and a significant range of cultures (world,2001). The name Melanesia was derived from the Greek word melas meaning ‘black’ and nesoi meaning ‘islands’ because of the dark skin of its inhabitants. These cultures are based on different ancestor’s mythologies (myths, legends, folklore) and deities. The early history concerning traditional story of people or explaining a natural or social marvel, and typically involving supernatural beings that reflect the geographical of the culture, the value of the culture and the history of the culture.

Don't use plagiarized sources. Get your custom essay on
“ Melanesian Myths and Legends ”
Get custom paper
NEW! smart matching with writer

This essay will be based on the significant of the myths in Melanesian society meaning how Melanesian myths are seen by local people, how it connects with the philosophy and connection to the Melanesian Wisdom.

According to dictionary.com, myth defined as a myth, legendary or folklore story that concerning some being or hero or event, especially concerning with deities or demigods and explaining some practice, rite, or phenomenon of nature especially the ones that belong to a particular sacred, religious, or cultural tradition of a group of people.

However, myth, legend or folklore have slightly different meaning. Myth is defined as a story based on traditional or legend, which has deep symbolic (figurative) meaning. Legend is a semi-true story which has been passed on from person-to-person and has significant meaning or symbolism for the culture in which it originated. Folklore is a popular story that was passed on in spoken form, from one generation to next.

The story might be true or an imaginary. Usually the story may have many versions with the unknown author. All in all, they all define as mythology.

Melanesian Myths passed down from generation to generation by word of mouth meaning verbally due to the one main reason that there was no source of recording or keeping but it is kept in a form of artifacts to prove the myths. In one of the Bernard Narakobi article titled “Melanesian Way” it reads “Our history did not have the binding effect of the written word. Accordingly, our influence was limited. Mill, it was a lasting human experience. But today, we have the gift of the written word and the privilege of the wheel. We can reflect on our ancient past and the modern life We can have a responsibility to ourselves and to the world to bring to the world the treasures of our civilization. For far too long we have known ourselves through books written by others”. (Narakobi, 1980)

Melanesian have many different myths but they do share certain basic elements and themes concerning Literature, Offering Timeless, and Universal theme. For instance, names of the character and details of their stories differ from island to island, but the activities in which they are involved often have much in common. Moreover, they may reflect typical themes they are conditioned by our experience of life and by the cultural level of the society within which we live. Basically myths identify the Melanesian through cultural activities like songs, dressing, dances, rituals or ceremonies, way of living, beliefs, sacred places.

Based on our origin, culturally the Melanesian consist of community, tribe, clans, family and individuals. We Melanesian believed that our life has its origin. How do we know? We know through myths that has been passed down from generation. When listening to the legendary myth we automatically know that this is where we come from or we usually know that, this is how this thing happened or that’s why we act like that. For example, there is a famous myth of the Wosera people of East Sepik province of how a cassowary woman appeared to be real woman and now all the woman not have cassowary features. There are different types of Melanesian myths presented about the origins of the people, the romantic myths, hero and heroines, the nature, gods and demons whom we refer to as supernatural beings. For example, origin of sun and moon, the creation of mankind, origin of fire, cultural hero’s like the great warrior. According to Bernard Narakobi in his book “Melanesian Way” saying “Before Christianity was introduced, we as Melanesian knew that we a spiritual people. We value our divine power which we felt and knew the forces of a source greater than ourselves”. (Narakobi, 1980)

In some isolated Melanesian communities where myths still continue to give force and meaning to the lives of the people. In some communities they do away because of the western influence on the religion of Christianity, social changes, political changes and economic changes. For example, the invasions of the Europeans took place with the same mixture of brutality and indifference that marked the process elsewhere in the Pacific. But in New Guinea, the encounter was more gradual and even today there are some isolated communities where contact remain minimal. In these communities the people’s lifestyle has not been touched by the way of westerners and their myths, concerning in their ritual re-enactment, continue to strengthen the bond between themselves and nature upon which their survival depends. (Poignant, Melanesia, 1967). Today, there are many movements in which people try to adapt with others in romantic reality with many philosophical ideas.

Looking at the philosophical view, Melanesian myths and legends connect with all aspects or branches of philosophy which are metaphysics that tells us story of how we came to be or formation of things, epistemology that tells us the empirical knowledge, anthropology tells us our origins, ethics tells us how our ancestors live their morally life, logic tells us how our ancestors think critically, political science tells us how the leaders governs their society in the past and aesthetics tells us different meaning of the beauty of dancing, dressing, arts craft and myth itself. Religion of myths gives sense to life of many esoteric societies around and spread philosophies while on the basis simple love of a nature. For all these ideas and movements, there is still need for a rationale. It is usually no longer codified into a myth, but the old myth still can have meaning for those who will seek. (Burland C. , 1974)

Referring back to Melanesian Wisdom, Melanesia is a mythical society that reflect the geographical of the culture, the value of the culture and the history of the culture by verbally, observation and experiences. Example, PNG is rich in songs, legends, myths, and other folklore as we did in the past, we look to a story for entertainment, to gain wisdom, and perhaps a sense of connection with our ancestors as well as with future generations (Lamb, 2008). The core of the myths concerning culture connects people with the past (ancestor’s period). It can be seen as living wisdom and use as a spiritual teacher. Myths and legends still play important role in some areas of Melanesia and remains a powerful force in society where traditional religious system and cult practices have been left relatively undisturbed.

To conclude, every Melanesian community has its own unique way of looking at the community by myths and legends. Each had its own coterie of mythology beings (legends) whose name was seldom known beyond its borders. A myth is a truth in an irrational form. It tells a story, using pictures and thoughts in its own context. Throughout Melanesia some common mythological themes and characters appear. Many myths deal with two fundamental issues where people came from and what happens after death. The myths of all mankind come from one source, the flow of consciousness which is in all of us and which in some mysterious way links us all at the level of “Common Unconsciousness” called by Professor Jung.

Melanesian mythology was passed down orally from generation to generation by gaining wisdom through storytelling, songs, observation, experiences, act, and keeping of some traditional items like artifacts. It identifies Melanesian people by their origin, cultures, dances, relationships, rituals, traditional names, sacred places concerning geography of culture, values of culture and history of culture. According to philosophy, it reflects to all philosophical branch.

Due to the Westerners ideology, as a result of modernization or the introduction of Christianity, Melanesian community myths and legends started to fade away because the tradition of storytelling has died out. There’s no one to passed down and how can today’s generation get the information to put in a written document. Yet even where change has occurred, mythology continues to play an important role. It has helped Melanesians make sense of the changes in their society and in their relationship to the broader world by providing ways of understanding and interpreting events. As one of the late Bernard Narakobi quote say in his book Melanesian Way saying ““A long time ago, our people discovered the secret of life that is to live well, love well, have something good for every person and die a happy death” (Late Bernard Narakobi). 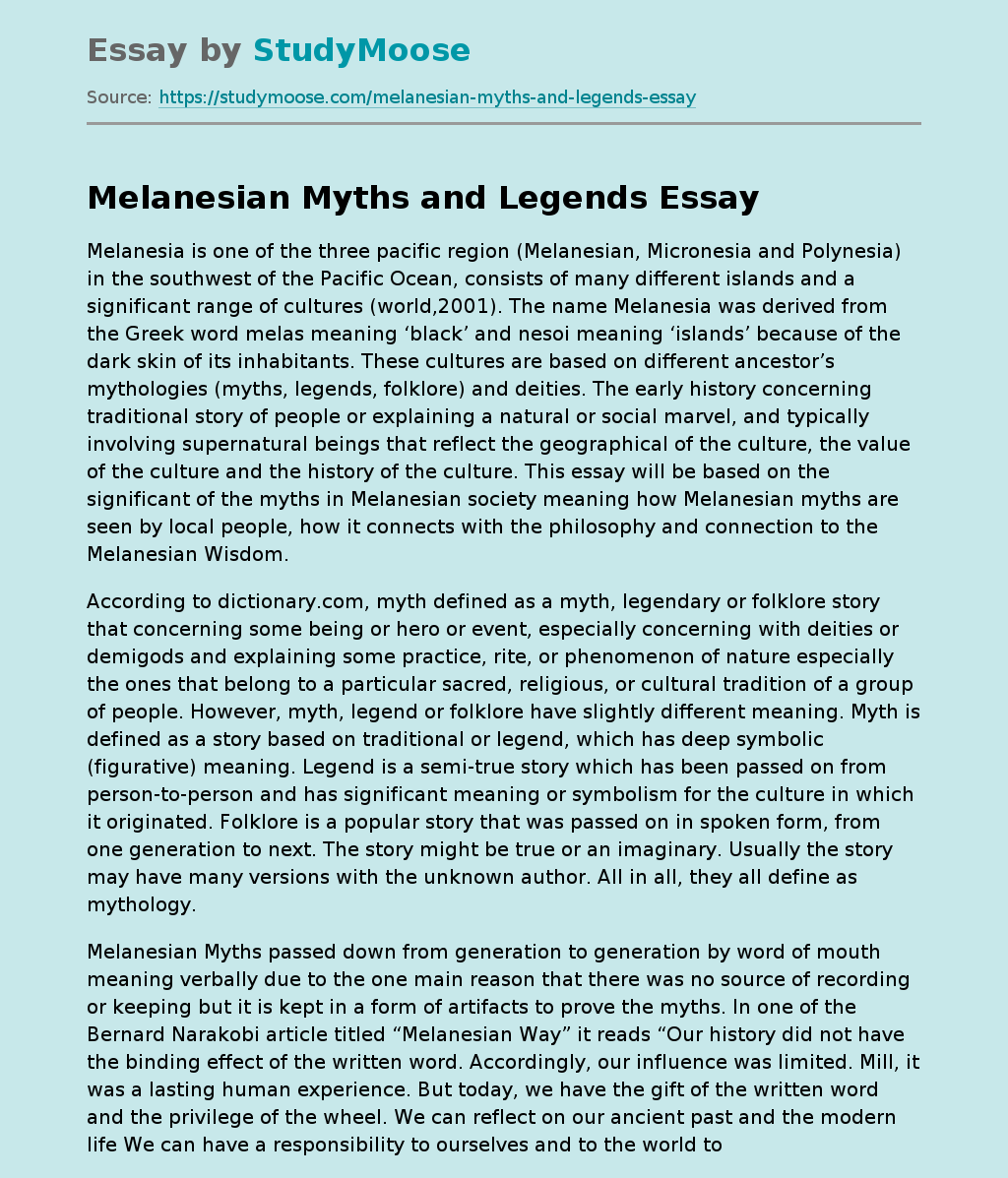