Legends - A long long time ago

A long long time ago in a deserted town called Romberine existed an old woman that liked very much to told stories. All the mornings were the same, the children went to school, the mommies cleaned the houses and the daddies sweated for their job. Amazingly by 6 p. m everybody stopped their activities and went to the old church. People may think they went to pray but it wasn’t true they went there to hear stories from the old lady.

Don't use plagiarized sources. Get your custom essay on
“ Legends – A long long time ago ”
Get custom paper
NEW! smart matching with writer

She used to sit down in her rocking chair and by moving back and forward she easily catch the attention of everybody around her.

Everyday was the same old story but it was so fascinating the way she told it that no one cared about that, since everybody seemed to forget what they had heard last night in order to live the story again. Many years passed away and, of course, the old lady died but the church was still there and the rocking chair still moved back and forward every night at 6 p.

m. The town didn’t lose their love for stories that’s why they made a pact in which every single body of the Romberine had to tell a story like the old woman used to do.

Romberine began to be famous for its stories, consequently many people from all over the world went there in order to hear them with their own ears. Little by little people spread them and adjusted them to their own cultures.

After 10 years every country developed their own adventures and stories that by being told from generation to generation became what we know now as legends. For over a thousand years, storytellers have developed tales, songs and stories twisted and turned over the centuries which defined our expectations of heroism, romance, and adventure, as well as our explanations of the world.

They have tried to gave us an imaginary fact of what may possibly occurred, enclosuring this into legends. A legend is a widely told story about the past handed down in written or spoken form, one that may or may not have a foundation in fact, in other words, it can be defined as an enclosement between generations and families where fiction and reality is mixture in a way one will never know if they are true or not. But what does the word legend mean?

It came from medieval word legenda, which means “something to be read”. At the beginning, they were referred to the story of a saint’s life which was read aloud during divine service or at mealtime. The word gradually came to be applied to collections of such stories; the most famous collection of legends is the Legenda Aurea of the thirteen-century cleric Jacobus de Voragine, something strange about this is that most of the legends are made up so long ago they have no known authors.

In those times legends were mostly about religious facts but step by step they began to twist over so much that today we consider them as a traditional story that deals with a particular person, a hero, a saint, or a national leader. In fact a legend can be consider as a part of a cultural inheritance, experiences, knowledge and beliefs that the town has been transforming and adapting to its present life. A legend is an essential element of world’s culture as well as of a town’s national memory and identity.

It represents throughout history philosophical, religious, social and scientifically changes, that the man has had in his development and evolution. Legends have a high value because they represent the thought and the humanity growth. As a whole legends’ role is not only for entertainment but for a perception of men’s life, human passions and cultural values. Therefore, they exist now and they will continue existing throughout time. 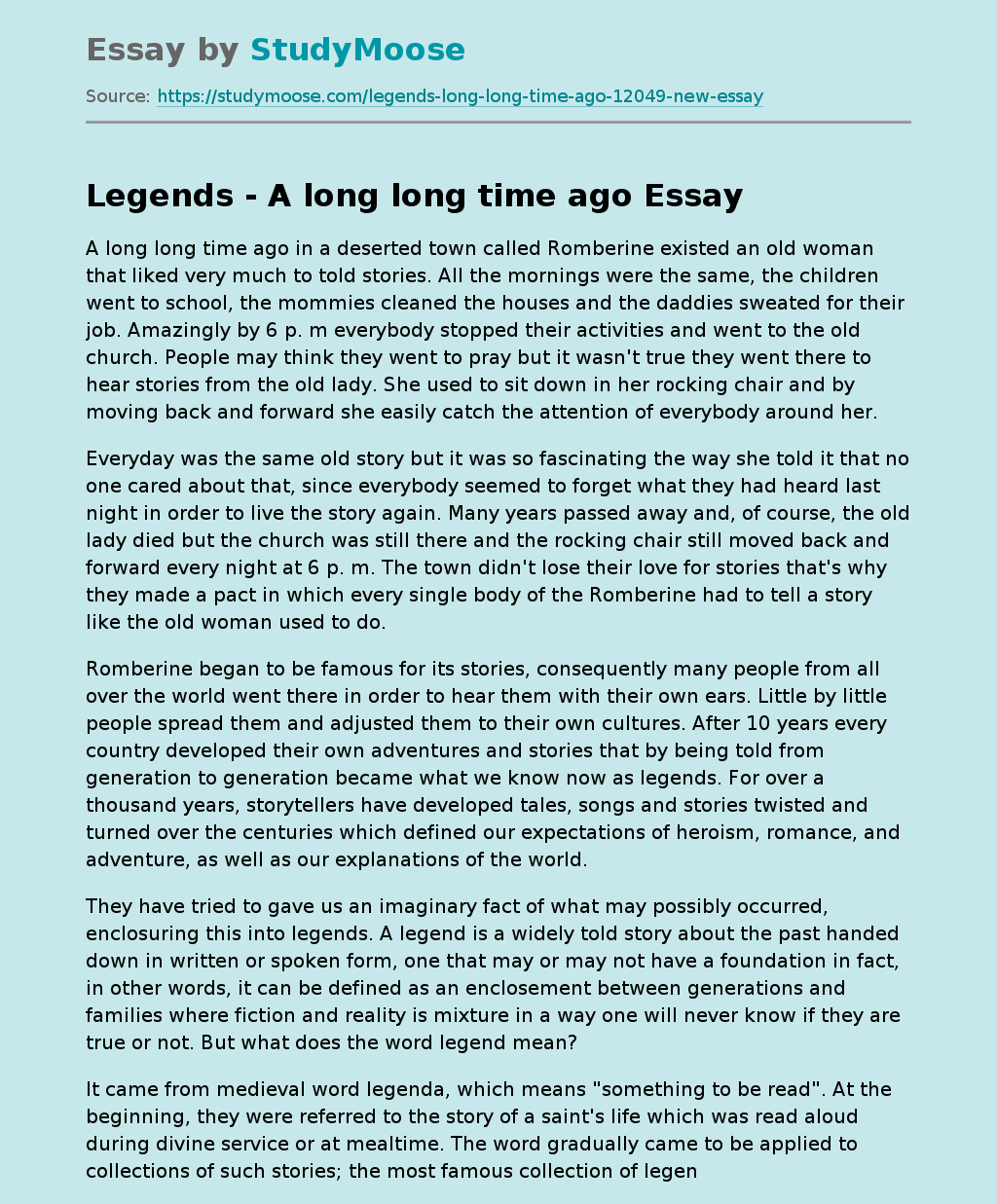