Among the many aspects of Greek culture that have influenced Western Civilization, the most notable would be that of their philosophy.

Don’t waste time
Get a verified expert to help you with Ancient Greek Contributions to Western Civilization
Hire verified expert
$35.80 for a 2-page paper

The Greeks believed that the human mind was capable of understanding everything. The three most distinguished philosophers of ancient Greece were Socrates, Plato, and Aristotle. Aristotle believed that reason and the ability to think logically was he distinguishing characteristic of human beings and that a life guided by reason is superior to any other [Document 2], a theory widely accepted in today’s culture. Socrates, the most prominent of the Greek philosophers, suggested that, “The unexamined life is not worth living.

” [Document 1]. This quote suggests that a life lived without question or examination is not worth living because then reason, the most godlike part of human nature, goes to waste. This is another theory that Western civilization has widely adopted.

Many ideas of government also originated in ancient Greece. This is the theory of government that, “favors the many instead of the few.”(Pericles, 430 B.C.) [Document 3]. In his Funeral Oration, given to the Athenians in about 430 B.

C., Pericles describes a democratic government, with the expectation that his citizens will have equal opportunity to serve the public, and will ask their most distinguished citizens to make their political decisions. Most buildings in our nation’s capital also have Greek characteristics. For example, the Lincoln Memorial in Washington was modeled after the famous Greek Building the Parthenon [Document 7]. Many specific features of this and other Greek buildings have also greatly influenced Western Civilization .

The Greeks believed that healthy bodies made the best use of nature’s gift. This is why Greek man who could afford leisure time spent most of all of their afternoons in the gymnasium practicing sports or working out to help move their bodies towards perfection. As a result for Greece’s love for the human form, the Olympics were founded. The Greek sculptor Myron honored the Olympic discus thrower by creating a beautiful sculpture to represent the Olympic event [Document 8]. The statue reveals the Greek’s passion for human form.

From arts and theatre, to philosophy and mathematics, ancient Greeks contributed much to Western civilization. Great thinkers such as Aristotle and Socrates helped shape Western culture’s attitude and outlook on life. The idea of a democratic government is Greek as well. Their arts and theatrical plays continue to entertain us even today. Even our capital’s buildings are based upon Greek Architecture. 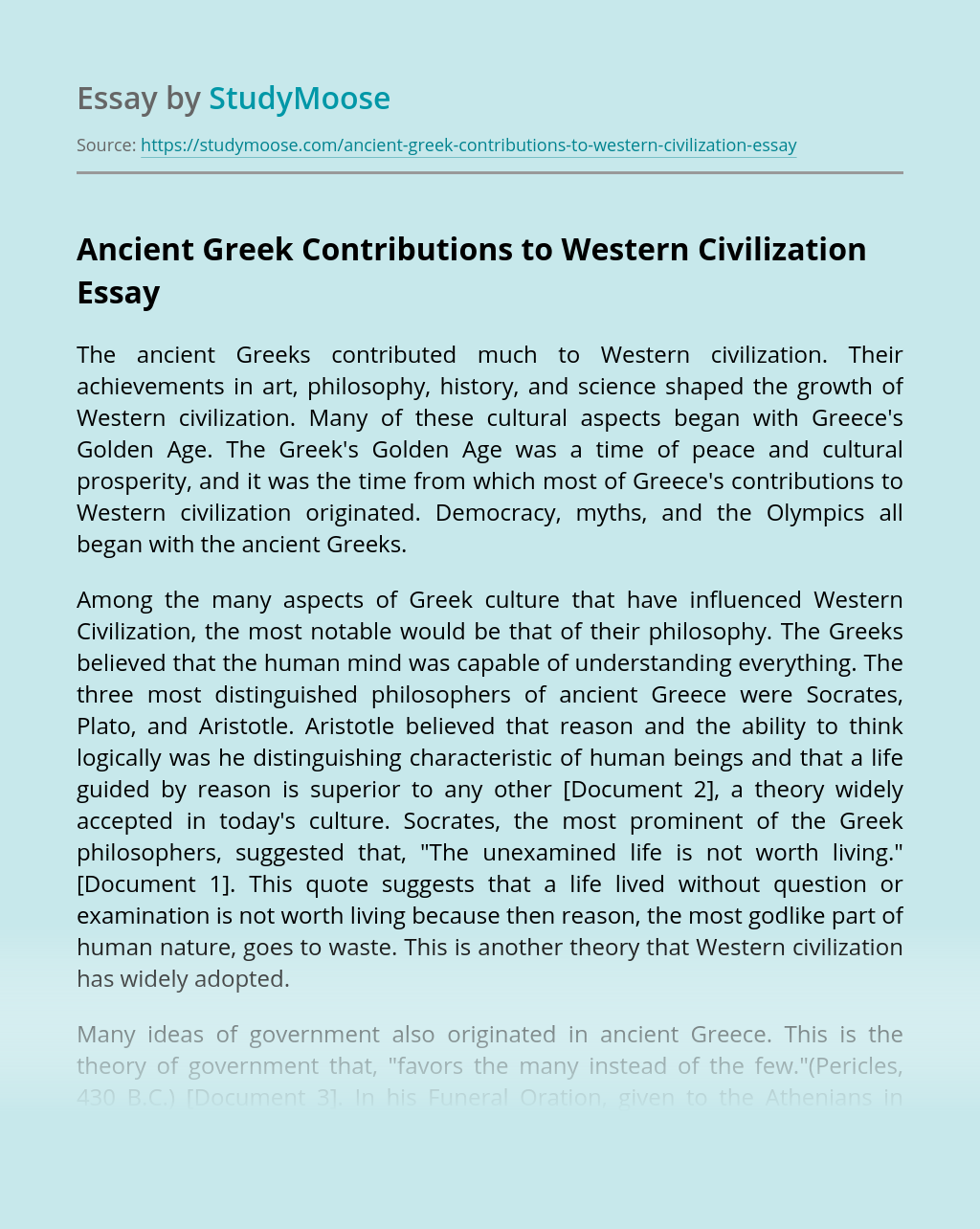