Auden an the Greeks

We would never have become fully conscious, which is to say that we would never have become, for better or worse, fully human. ” this quote is for W. H. Auden, who was a prolific writer and plat write. In this paper I will endeavor to give insight about the author of this quote, the origins of this piece, and what the author meant in writhing it. As well as examples of proof that Auden’s theory was true or not.

And finally I will give my opinion whether I feel that Auden quote is correct.

Don't use plagiarized sources. Get your custom essay on
“ Auden an the Greeks ”
Get custom paper
NEW! smart matching with writer

To start with a short back ground on the author Wystan Hugh Auden he was born in York, England, in 1907. He moved to Birmingham during childhood and was educated at Christ Church, Oxford. As a young man he was influenced by the poetry of Thomas Hardy, Robert Frost, William Blake, Emily Dickinson, as well as old English verse. Auden seem to have always had a fascination with the ancient Greeks having been educated at a young age on the teaching of Socrates, Plato, and Aristotle .

Auden’s love of the ancient Greeks would in later life place him in the category as a Grecophile: ( a lover of all things Greek). This love of Ancient Greek; teachings, and traditions I’m sure this led to Auden’s viewpoint of how the Greeks contributed to modern civilization. In researching Auden’s line about the Ancient Greek’s and their contributions to are modern day society I found that the line is taken from a larger writing entitled: ‘The Greeks and Us’ in Forewords and Afterwords, (W.

H. Auden, New York, 1973, p. 32). The Quote is: “I can think of no better way of indicating what we owe to Greece than drawing distinctions, for of all intellectual acts, that is perhaps the most characteristically Greek.

It is they who have taught us, not to think–that all human beings have always done–but to think about our thinking, to ask such questions as “What do I think? ”, “What do this and that other person or people think? ”, “On what do we agree and disagree? Why? And not only did they learn to ask questions about thinking, but they also discovered how, instead of giving immediate answers to suppose something to be the case and then see what would follow if it were. To be able to perform either of these mental operations, a human being must first be capable of a tremendous feat of moral courage and discipline, for he must have learned how to resist the immediate demands of feeling and bodily needs, and to disregard his natural anxiety about his future so that he can look at his self and his world as if they were not his but a stranger’s.

If some of the Greek questions turned out to have been incorrectly put, if some of their answers have proved wrong, that is a trivial matter. Had Greek civilization never existed, we might fear God and deal justly with our neighbors, we might practice arts and even have learned how to devise fairly simple machines, but we would never have become fully conscious, which is to say that we would never have become , for better or worse, fully human. ”(W. H. Auden, New York, 1973, p. 32). In reading this text I begin to understand where Auden’s viewpoint is coming from.

The main part of the text and purpose of this paper is still widely regarded as true by many citizens in our country today. That the ancient Greek society of Plato, Aristotle, and Socrates, still offers much to the modern world. And with out this it would be hard to imagine what our world would be like without their contributions. Auden is agreeing with this philosophy. Auden is basically saying that the ancient Greeks have contributed how we should be looking at things that affect are daily lives, however so many of us do not.

This is saying that we should be looking at a subject from not only are own viewpoint, or are initial first thought on the subject, but to be introspective and take the time to contemplate how the world around us may, or may not, see the same set of circumstance. And then taking all opinions into consideration for the final outcome regardless ff that outcome is good or bad. This takes a lot of mentally thought and discipline since in modern society we tend to be less philosophical, most of us say and do what first comes to our minds regardless of what others around us feel or think of the matter, or the eventual outcome of the situation.

In my opinion Auden was saying that we can and should apply this to every aspect of are lives whether it is a personal matter, a judgment call, or really anything. The Greeks felt, in my opinion, that you must always think of your fellow man first and place oneself in his shoes, how another would feel and react to a situation taking that in to consideration and basing ones thoughts and actions on that.

This sets peoples apart from a reactionary society to a thinking one, and had Greek civilization not existed we may have made our way, however we would certainly not had compassion for our fellow man and their viewpoints, in other words we would have not become fully human. This school of thought can be shown in example by the relationship of the three great ancient Greek philosophers Socrates, Plato, Aristotle, theirs was a relationship of a teacher educating his pupils.

Socrates schooled his followers, Plato, Aristotle with his vast knowledge and wisdom, the method became known as Socratic. According to Socrates an inquisitive nature was critical in understanding and solving questions. And by posing this to every one from the man on the street to authority figures and taking their opinions into consideration would compel you to the most reasonable and logical answer benefiting all involved in the situation. However not even Socrates pupils always agreed with his teachings.

Both Plato and Aristotle disagreed with some of Socrates views and disagreed with one another. One thing that both did agree on was that an open forum of opinions would help you to acquire the best solution to a problem. Whether they agreed with it or not you must listen and always continue to discover from as many sources to come to the correct conclusion. In conclusion my viewpoint on W. H. Auden’s comment: “Had Greek civilization never existed… we would never have become fully conscious, which is to say that we would never have become, for better or worse, fully human.

That yes indeed, after researching what he was referring to and the trying to look at it from the perspective of the ancient Greeks that using critical thinking, and excepting all shades of opinion whether you agree with them or not and allowing them into your decision making process this is the most effectual way of deducing a question. In this I agree, however I find the modern world we are living in that few of my fellow humans take little or any of this into consideration. Today in my opinion we speak more often before we think of what we are saying and how it effects other and these peoples viewpoints.

To me this is sad, if we thought more about the views and feelings of one another and less about making sure our own voice is heard what a different society we would live in. I would have to say I agree with W. H. Auden that if not for ancient Greece we would not have developed fully in to humans. However I feel that our modern society is growing rapidly away from theses ancient principals.

Auden an the Greeks. (2018, Oct 27). Retrieved from https://studymoose.com/auden-an-the-greeks-essay 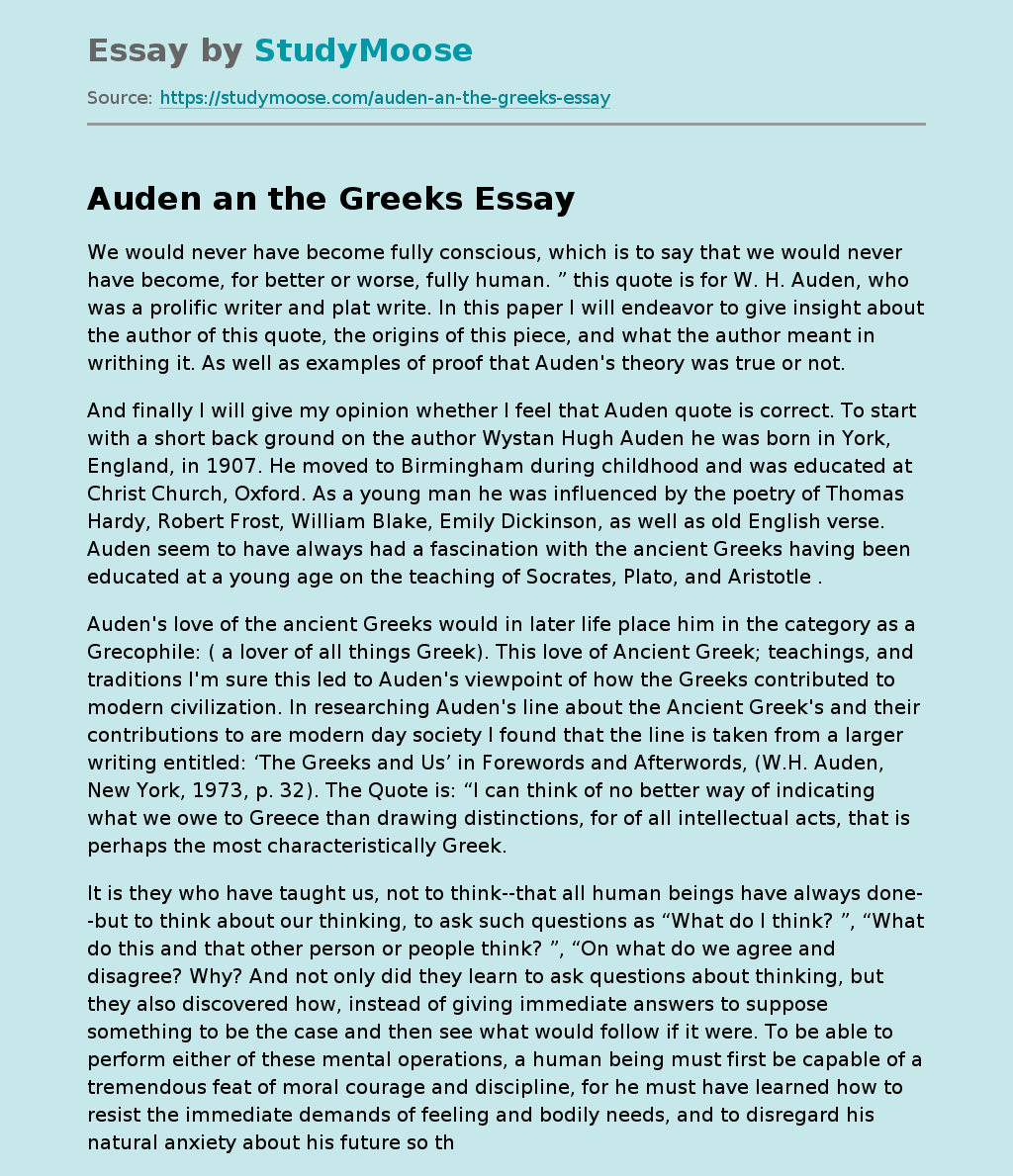