According to Tom Harris, urban legends are modern fictional stories or myths passed “from person to person and frequently have the elements of caution, horror or humor. ” Most of the urban legends are always false though some have proven true. They are mostly always inspired by a true story but tend to change in the course of transmission from one person to another. Moreover, it is hard to follow back an urban legend to its source, this is because it seems to come from everywhere with slight variation each time.

Don't use plagiarized sources. Get your custom essay on
“ Urban legends ”
Get custom paper
NEW! smart matching with writer

James M. Henslin, on the other hand describes an urban legend as “a deliciously entertaining tale” the truth of which is unverifiable. Thematically, they are characterized by some elements of horror, warning embarrassment, humor, appeal to empathy and morality. Their unexpected twists though always weird, are sometimes so reasonable enough to be taken as the truth. One example of an urban legend is that is exemplified by Harris is called the Vegas “organ harvesters”.

Proficient in: History And Legend

In this legend, it is reported that a man meets a woman in an Vegas pub and have a drink together, the observer apparently relates how the two hit it off but at one time the man passes out. The story adds that the man later wakes up to find himself in a bathtub covered in ice. There is a phone near him and a note telling him to “call 911 or you will dies. ” When he is taken to hospital, he the doctor tell him that he had a major surgery and one of his kidneys had been taken.

This story, though not true has the basic elements of an urban legend. First it has an element of horror in it; the man realizing that his kidney has been harvested. It also encompasses an element of caution. Vegas being among the most widely visited places on earth; the caution is to avoid meeting people you do not know so well. Of the two authors, Thomas Harris is clearer and I agree with him in most of his dissection of urban legends.

His simple examples and method of following back a legend to its most probable source is interesting. In my own perspective, urban legends are beneficial in some ways. One is that by cautioning people on what to do and what not to do, they make people careful about what they do. Moreover they also entertain. 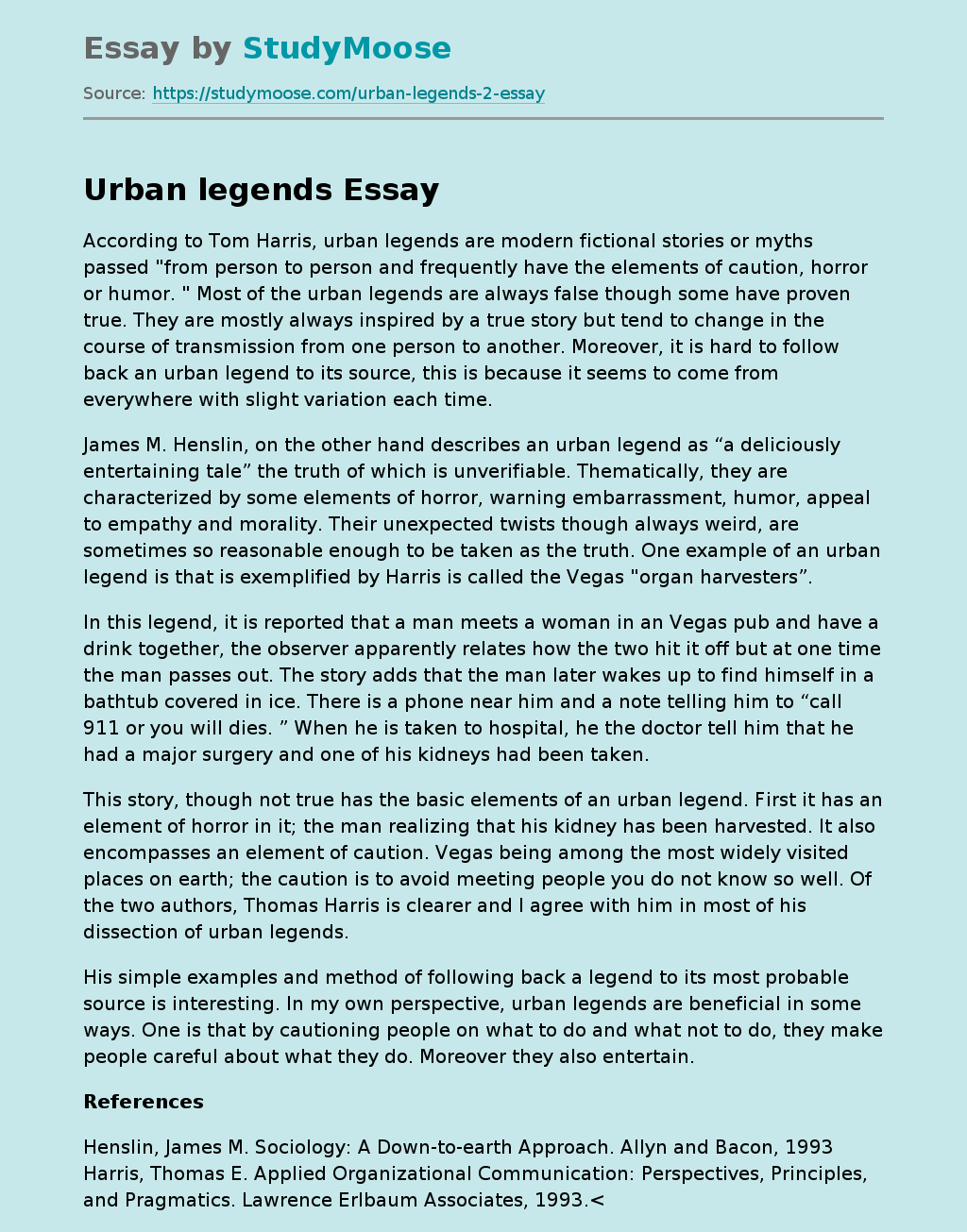