The Cultural Development of ancient Egyptians and ancient Chinese civilizations were fairly similar but were different on certain ideas. From the way historians looked at the number of gods/goddesses each civilization worshipped, to the inventions and tools the craftsman made to make life less difficult shows the similarity of the two civilization. Both couture’s buried their dead with items of value, practiced ancestor worship, had elaborate systems of Bureaucratic systems of administration and, had rudimentary concepts of Mathematics and Medicine.

Turn in your highest-quality paper
Get a qualified writer to help you with
“ Cultural Difference between Ancient Egypt and Ancient China ”
Get high-quality paper
NEW! AI matching with writer

Ancient Chinese religion based upon Confucianism. Both Taoism and Confucianism began at about the same time, around the sixth century B.C.E. China’s third great religion, Bu. The religion of Ancient Egypt was a polytheistic (many gods) religion with one short period of monotheism (one god). Their religion hosted about 700 different gods and goddesses. Despite the similar concepts of the 2 civilization ancient Chinese: In Egypt, people were buried with thought to preservation, as they believed that the dead would be able to use their bodies in the afterlife.

Chinese burial style depended on the province as well as the main religion of the person.

But both civilizations were polytheistic (belief in many gods). Ancient Egypt belief system relied heavily on the tales of the many deities that they worshiped. In Ancient Egypt, it was believed that, when a Pharaoh passed away, he was met with many tests. If successful, the Pharaoh would ascend and become the sun god, Ra. However ancient Chinese belief system relied on three major religions: Taoism, Confucianism, and Buddhism.

Taoism was founded during the Zhou Dynasty in the 6th century by Lao-Tzu. The idea of Yin and Yang comes from Taoism. They believed that everything in nature has two balancing forces called Yin and Yang.

Confucianism was born in 551 BC. Confucius was a philosopher and thinker. Confucius’ teachings focus on treating others with respect, politeness, and fairness. He thought that honor and morality were important qualities, family was important, and honoring one’s relatives was required. Buddhism was based on the teachings of Buddha. Buddha was born in Nepal, just south of China, in 563 BC. Buddhists believe in a “rebirth” of the self, and the concept named Karma (all actions have consequences). What makes these two civilizations similar, Egypt and China had similar governments in which they were both monarchies.

Both ancient Chinese and ancient Egypt made tools and technology to improve their lives, and make everyday tasks easier. Also both civilizations also required an irrigation system to help regulate and utilize the nearby rivers’ sources. However, this is where the similarities of technology end. Egyptians focused primarily on the afterlife. They built grand pyramids as burial sites and afterlife protection for Pharaohs and important nobles. The Chinese spent their efforts building roads for easier trade and canals for efficient, improved farming. Ancient Egypt and ancient Chinese used paper.

China and Egypt are also similar in the fact that they all took use of bronze metallurgy. But although they both used bronze, China was better adapted to it and benefitted more from it. Egypt was slow to develop the use of bronze, and the high cost didn’t allow them to use it much. Ancient Chinese made paper (Papyrus- a tall plant that is like grass and that grows in marshes especially in China). Ancient Egypt are known for their pyramids.

The size, design, and structure of the pyramids reveal the skill of these ancient builders. The pyramids were great monuments and tombs for the kings. The Egyptians believed that a king’s soul continued to guide affairs of the kingdom even after his death. To ensure that they would continue to enjoy the blessings of the gods, they preserved the pharaoh’s body through the mummification process.

They built the pyramids to protect the pharaoh’s body; the pyramid was a symbol of hope, because it would ensure the pharaoh’s union with the gods. Ancient Chinese rich people had fancier houses, and people also built fancy temples and palaces. All ancient Chinese architecture was built according to strict rules of design that made Chinese buildings follow the ideas of Taoism or other Chinese philosophies. The design idea was that buildings should be long and low rather than tall – they and symmetry: both sides of the building should be the same, balanced, just as Taoism emphasized balance. Both Ancient Egypt and Ancient Egypt were both river civilizations that faced the challenge of flooding of their nearby rivers, which made irrigation systems and tracking floods important.

While researching ancient Chinese and ancient Egypt I saw that each civilization had the same ideas but they took their prior knowledge and bulled on it, in different ways. Based on this evidence and facts I gathered I conclude that ancient Egypt and ancient China are the strongest and longest lasting civilizations because of their organization. Also since each civilization’s location was closed off, intruding and trying to conquer weren’t a major issue. While writing this paper I learned that with each civilization’s advanced tools and inventions it impacted everything and influenced all the technology we have today.

Cultural Difference between Ancient Egypt and Ancient China. (2016, May 16). Retrieved from https://studymoose.com/cultural-difference-between-ancient-egypt-and-ancient-china-essay 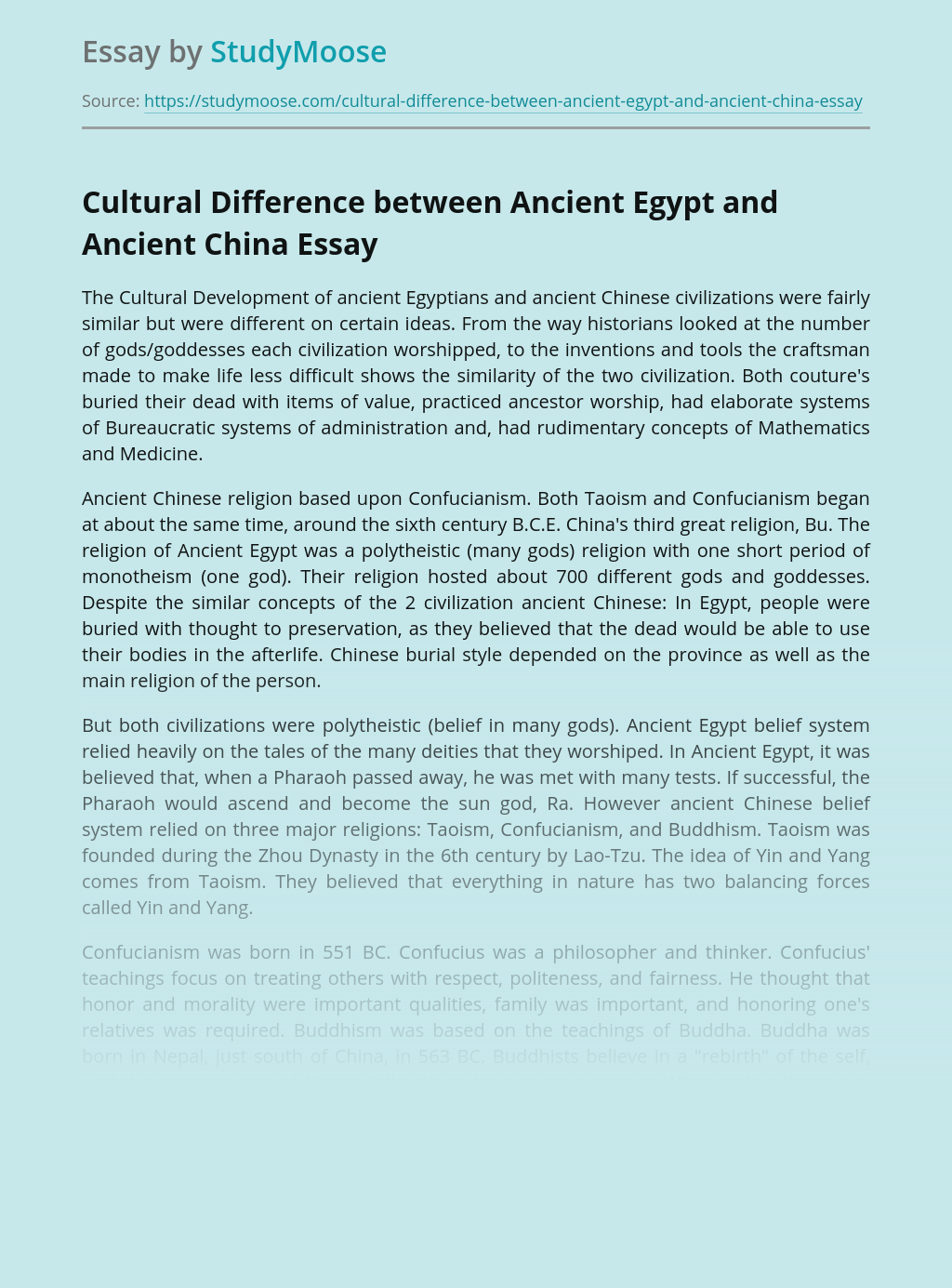 Turn in your highest-quality paper
Get a qualified writer to help you with
“ Cultural Difference between Ancient Egypt and Ancient China ”
Get high-quality paper
Helping students since 2015
Stay Safe, Stay Original