Anselm and Aquinas about The Existence of God

Don't use plagiarized sources. Get your custom essay on
“ Anselm and Aquinas about The Existence of God ”
Get custom paper
NEW! smart matching with writer

The idea of ontological proof of had considered the concept of justifying the logic behind the existence of God.

On the other hand, the ideas of Aquinas had provided significant approach of cosmological theology in order to prove the existence of God. Aquinas had utilized the five components of reason that justify God’s existence in a logical perspective. Discussion Ontological Proof of Anselm The ontological argument of Anselm considered the idea of Proslogion, which argued the logical being of God.

According to the perspective of Anselm, the being of God is so evident that the definition present in the character of God is already enough to justify His existence.

As stated in the book of McGrath (1998), in Anselm’s Proslogion, he offers the definition of God as “that than which no greater thing can be thought” . From the idea of Anselm, the existence of God came from the statement, “that than which nothing greater can be conceived. ” The arguments of Anselm’s ontological proposal involve, God as the greatest possible being.

Anselm argued that the notion and the nature of a being existing only in the minds of human being and society could not be considered as great or powerful. Hence, if God is to exist, He must exist in reality for Him to commence His power overall.

In this logic, Anselm justified the existence of God, in not only the mind of Human beings but most of all in reality. In the perspective of Anselm, he utilized the idea of faith and logic in order to justify God’s existence. The idea of using faith gave the thought of God’s presence as determined by belief of His presence. For Anselm, in order for one to understand God’s existence, one should first believe that God exist in reality and not only in human minds. Faith had been viewed by Anselm as an important component in understanding the nature and the mystery for God’s existence.

Within the logic of Proslogion, Anselm mentioned that the being of God under His characteristics of being transcendent and immanent were the main points to consider His existence. According to Hogg (2004), if God were not transcendent then there would be no reason to assume His necessity. If God were not immanent, then no one could know Him. Under the theology of Anselm, the concept of faith should facilitate the belief for the revelations of God’s existence, while the idea of Prologion gave rise to the logical reasoning of explaining the existence of God.

Cosmological Proof of Aquinas Aquinas’ argument of the cosmological evidence of God’s existence revolved around five components, which provided the argument of his defense. In Summa Theologia of Aquinas, he argued using these five ways of justifying the existence of God under the basic thought of man’s relation with God as Creator and creation. In his first argument, Aquinas provided the “argument of motion” in order to depict the concept of change. He argued that the presence of dynamics in this motion was brought by a cause that possessed significant purpose.

In addition, he mentioned that from a single cause of motion, another cause is employed, and from there, under still until the concept of unlimited causation arrived. Aquinas thought that the origin of this greater chain cannot possibly come from human nature but more significantly from God, which proved the He existed. In Aquinas’ second argument, he utilized the aspect of “cause and effect” argument that gave the idea of an event as being the effect and influenced by a cause. Somehow, the idea of the second argument had been derived from the concepts of motion wherein the cause-and-effect motion should always possess the original cause.

The fourth argument of Aquinas, he proposed the idea of values origin. He considered that the values of goodness, grace, love, forgiveness, etc had all been originated from the positive background of God. The only nature that can provide the true intent of these values is God’s nature; hence, justifying the existence of God. Lastly, the fifth argument of Aquinas involved the necessity for a being to facilitate the task of supervising the creation, which can only be facilitated by God. Conclusion

Within the study, the existence of God had been proven under two perspectives of Anselm and Thomas Aquinas. With Anselm’s Ontological proof of God’s existence, he defended with the two components of faith and logic. He argued that God is present not only in the human mind for God is great, and no being can be great if he only exists in the minds of men. Hence, with faith that God is existing, God indeed is existing, and because He is great, His existence is justified. On the other hand, Aquinas provided the five components that defended the existence of God.

Anselm and Aquinas about The Existence of God. (2017, Jan 01). Retrieved from https://studymoose.com/anselm-and-aquinas-perspective-essay 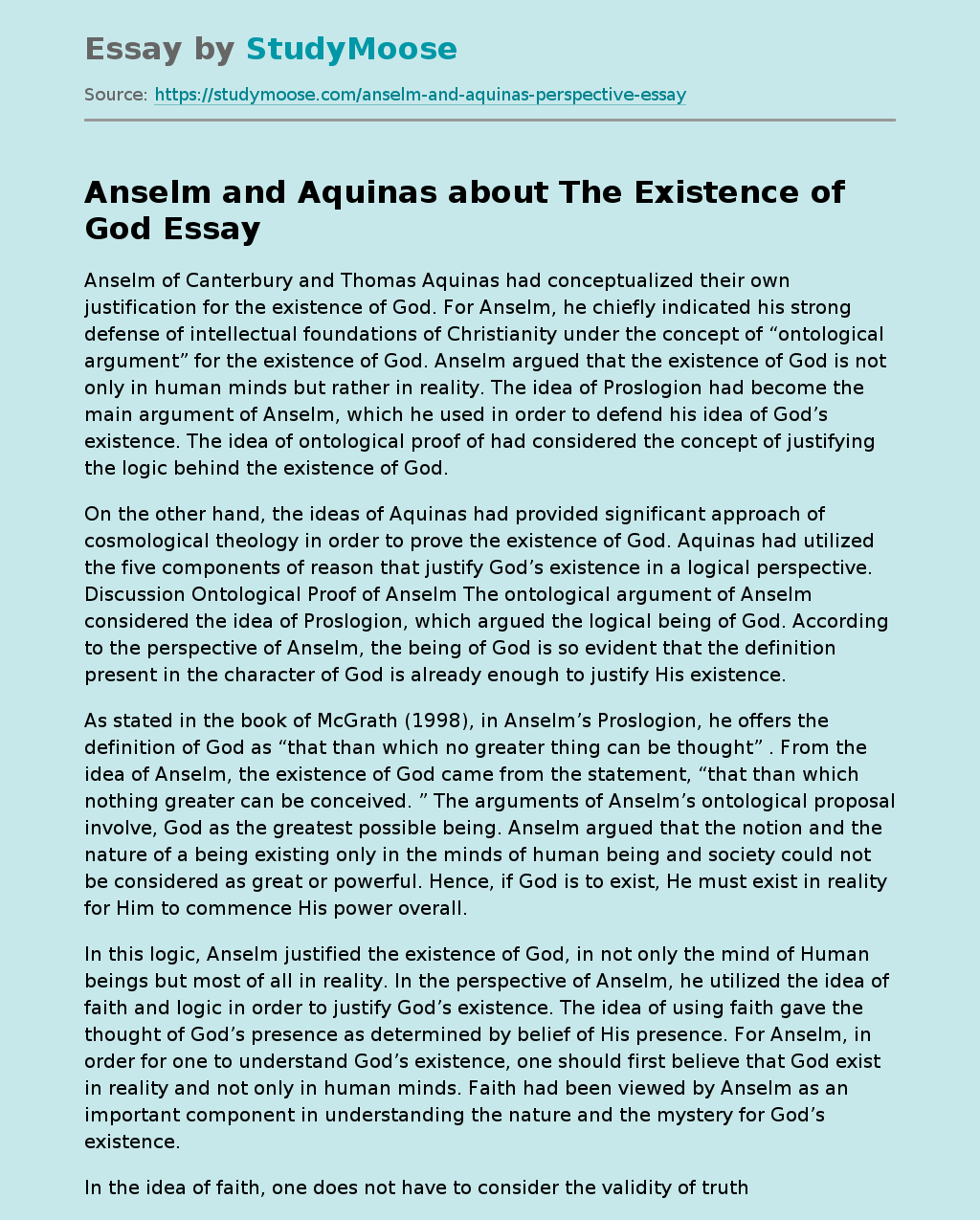