The weaknesses of the Ontological argument give support to Atheism. Discuss this statement

Anselm’s ontological argument described in part (a), was refuted in his own lifetime, by Gaunilo, who demonstrated in a reduction ad absurdum of his own, that if the logic of the argument were applied to things other than God, it led to invalid conclusions. Gaunilo didn’t identify any specific fault with the argument, but argued that something must be wrong with it, because if there wasn’t anything wrong, then we can use its logic to prove anything, which we may have no reason to believe to be true.

Don't use plagiarized sources. Get your custom essay on
“ The weaknesses of the Ontological argument give support to Atheism. Discuss this statement ”
Get custom paper
NEW! smart matching with writer

For instance, Gaunilo argued that it’s possible to construct an argument in the exact same form as the ontological argument, that claims to prove the existence of the perfect island: this island must exist for if it did not then it would be possible to conceive of an island greater than that island than which no greater can be conceived, which is absurd. Therefore, if the ontological argument works, then the argument for the existence of the perfect island must work too.

They are both logically similar, so they stand, or fall together.

Another weakness of the ontological argument which gives support to atheists is Immanuel Kant’s objection to it: Existence is not a Predicate. Fundamental to both Anselm’s and Descartes’ form of the ontological argument is that existence is a predicate, an attribute or a quality that can be possessed or lacked. These qualities for example, may or may not belong to a thing or being and their presence or absence is part of our understanding and apprehension of it. Kant observed however, that existence isn’t associated with the definition of something, since it didn’t add to our understanding of that thing.

Bertrand Russell furthered Kant’s observations, proposing that ‘existence’ was not a predicate, but a term used to solely indicate the instance of something in the ‘spatio temporal’ world. To say something exists only tells us that that thing occupies a space on the earth. For example saying ‘Cows are brown, and exist’ tells us only one thing: they are brown. The ‘and exist’ shows that they are on the earth, however it’s a tautology since to say they are brown, effectively suggests that they exist and aren’t imaginary.

Thomas Aquinas had already questioned this aspect of the ontological argument, claiming that Anselm was guilty of making ‘transitional error’ – moving from the definition of God to the existence of Him. He observed that Anselm also was guilty of making an assumption about the definition of God that was not necessarily shared by all believers. This supports atheism because not all believers believed in Anselm’s definition of God, which poses the question, if people have different views on the right or wrong definition of God, what’s to say that they could ALL be wrong, and atheism is the truth in it all? Furthermore, Aquinas said that understanding the term ‘God’ means that God exists in the understanding, not in reality.

God’s existence in reality must be demonstrated a posteriori, with evidence or experience. Atheism is supported in this way, as atheists could argue that anyone can believe what they like in their minds, but something has to be evident in material form in reality to be actually real. Overall, the weaknesses generally give support to atheism as they show alternatives and flaws in the ontological argument. The ways in which atheists interpret the critic’s objections leads to further belief that God does not exist. Atheists are supported primarily by the fact that the ontological argument is a priori, so does not rely on empirical evidence, therefore if there was empirical evidence for God’s existence, they might be swayed slightly in their beliefs.

The weaknesses of the Ontological argument give support to Atheism. Discuss this statement. (2016, May 21). Retrieved from https://studymoose.com/the-weaknesses-of-the-ontological-argument-give-support-to-atheism-discuss-this-statement-essay 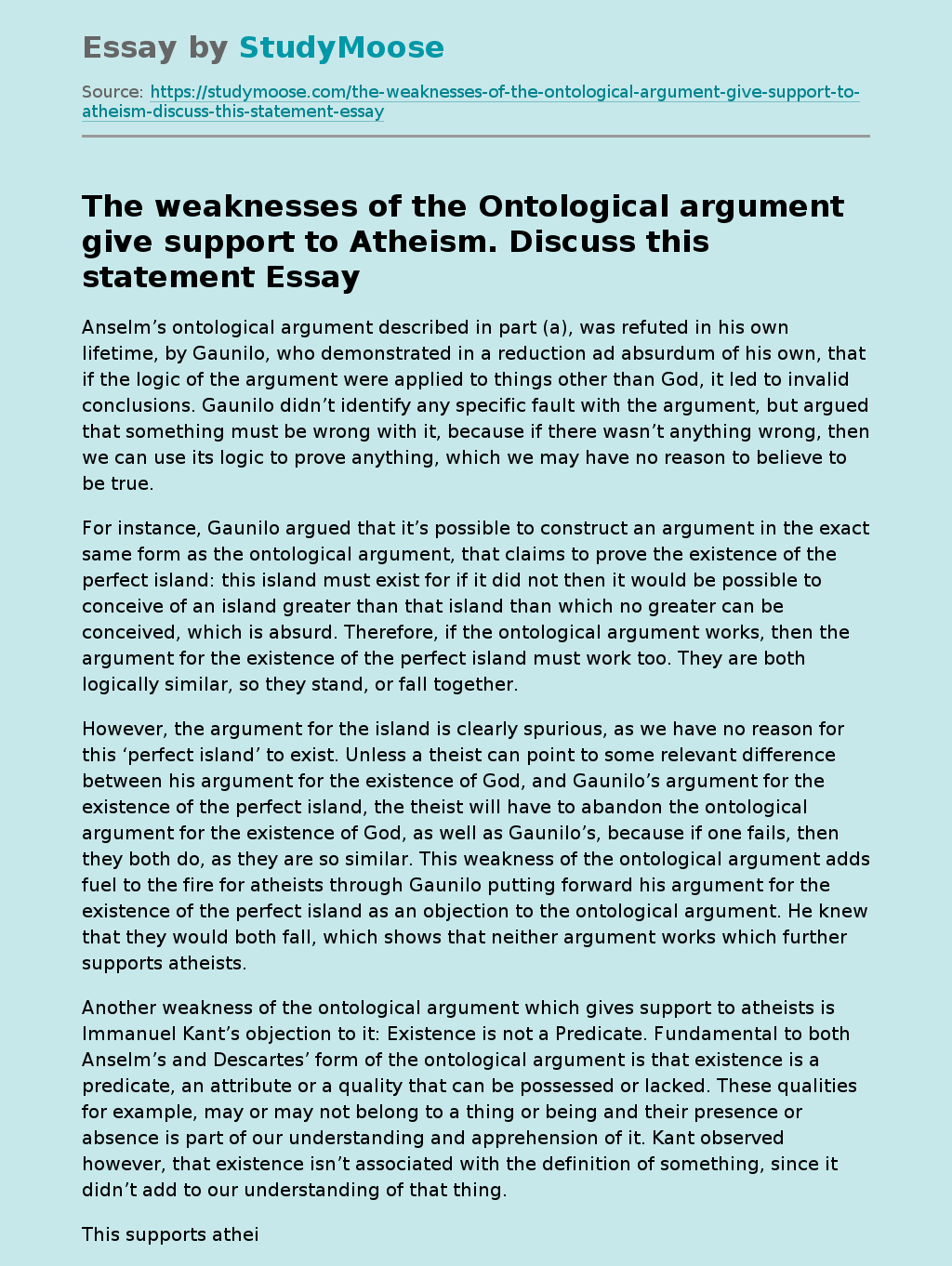