The Importance of Natural Law in Aquinas' Political Theory

Don't use plagiarized sources. Get your custom essay on
“ The Importance of Natural Law in Aquinas’ Political Theory ”
Get custom paper
NEW! smart matching with writer

It placed the importance of the law being just by comparison to natural law. The essay will finally look at Aquinas conception of good related to natural law and ask if it provides a discernable concrete explanation of the idea of good. It will also consider if natural law within a framework of God being a benevolent ruler is sufficiently argued within Aquinas political theory.

p. 8-11). Natural law within this context is derived from divine providence, it allows for the rationality of human beings to make appropriate decisions. Aquinas’ view of divine providence is related to natural law through his concept of eternal law that god is the creator of all and all order through this has rational order (Bradley, 1997 p. 134-135).

This use of natural law in relation to eternal law allows for human beings as rational beings that are able to survive and thrive are not subject to limitations such as the non-rational animal kingdom, it explains human agency in the world that even though they are preordained to follow an eventual end there is ability to choose actions for themselves due to intellectual ability unlike animals. Aquinas (1987, p. 8-9) argues that intellectual action is undertaken to seek an end point of knowing God. Action taken under the idea of natural law in this instance can be seen law as ending with a beneficial result for society and the individual for all is ordered in the betterment and in accordance with God’s nature. If law is to considered as ‘an ordinance of reason directed towards the common good and promulgated by the one who has the care of the community’ (Aquinas, 1920) then it brings into question what happens if individuals within society, group or the world have an advantage, how does it reconcile with the God’s nature, what underpins the idea of natural law in this case.

Natural law is crucially important to Aquinas political theory because it allows for the creation of political structuring of the societies that explains human beings free agency of action but also ties this ability to take free willed actions into a system controlled by God through eternal law. The concept of free will is brought to the fore in that if human beings desire to an end point of knowing God how is actions that are not based on reason or advantageous for individuals explained within his conception of eternal or natural law. Aquinas political theory served to attempt to break from feudalism and irrational ruling patterns and natural law can be seen as underpinning this move. Magee (1999) argues that Aquinas sees law not as the the sole remit of the ruler but rather it is also but it is also in that which is ruled. Natural Law could be seen as increasing the significance of individuals and this would further consolidate Aquinas political theory in practise.

The new found importance of the individuals could be seen as creating a disincentive to rule unjustly through exertion of power or majority opinion. Natural law within Aquinas political theory was crucially important in judgement of human based laws. Bradley (1975) saw Aquinas as considering that the more a law is removed from natural law concepts the increasingly invalid it would be considered a,g the appearance of a law but is a ‘perversion of law’. In essence natural law is the barometer by which earth based laws are to be judged, this is important because it creates not only a template for the construction of political systems but also a measurement tool. Aquinas concept of ‘good’ within his work and how good relates to natural law is an issue within his political theory. His basic concept of “Good is to be done and pursued and evil is to be avoided” (Aquinas, 1988, p. 49) could be seen as natural law changing the face of interaction on earth.

This could be seen both as do no physical harm but good being considered as good solely considered within humans that of natural law instructing us to develop intellectual pursuits such as prudence, art and science or developing will such as justice and courage. These concepts of good conveyed through natural law can be seen as creating the conditions for a functioning respectful society. Aquinas concept of natural law and how it relates to his political theory is fundamentally important because natural rights underpins his idea that ruling is not for personal aggrandisement or purely the benefit of the ruler but rather for those who are ruled. Tieing into this is that unjust laws would no longer have the security of force behind them, if they are deemed not in keeping with natural law. The measurement against natural law allows for a radical shift away from feudal power. The concept of good within his work also furthers this move from feudalism because it creates the groundwork for a functioning society based on natural law as opposed to force.

Aquinas’s conception of good is understandable within his work but it does not give concrete verifiable concept of good. Without verifiable proof of what good is then it must be considered as one conception of good amongst many. Kelsen (2000) argues it is suggested that within natural law in it is possible to understand fully a solution to social problems by looking at the nature of society, man himself. The benevolent attitude of God is also an issue within the concept of natural law in Aquinas political theory could be seen as the concept of good being left to man to decide and this could be twisted to suit individual’s own ends undermining the political order Aquinas proposes should be based on natural law. Vries (2012) writes that the presumption that natural inclinations that underpin natural law are to be followed for betterment is a problem.

Natural inclinations could be a test by God rather than what Aquinas proposes to be followed to bring you closer to God. It reduces natural law to the concept of a faith based belief because it is not verifiable. The acceptance of natural law within Aquinas work is based on the acceptance of a higher power but what is lacking is that a higher power can only know their action and natural rights is not consistent with that idea. The lack of verifiable proof of the concept of good which underpins natural law serves as a problem because good can exist as numerous different ideas and as such be misused in the name of natural law as can be seen through homosexuality and natural law. Feeding into this issue over good is the verifiability of natural law, it is a sorting of order through laws that is not based on tangible properties but rather a construct, similarly if taken as factual it proposes to know the unknowable that of Gods intentions. The essay has attempted to show that natural law is an underpinning concept of Aquinas political theory, it puts forward an explanation for human free agency of action within the framework of a higher power such as God.

It is also crucially important in removing power from purely constraints of powerful and powerless and placing it within the confines of laws enforced must have be in keeping with natural law to be justified. The concept of natural law and its relation to the idea of good runs into issues within Aquinas political theory over conceptions of what good is and if it is absolute or variable. Natural law within Aquinas work also creates an issue of knowable actions over a higher powers intentions for humanity, acceptance of natural laws intentions to bring people closer to knowing god are not discernable through verification and exist as faith based beliefs.

The Importance of Natural Law in Aquinas' Political Theory. (2021, Sep 27). Retrieved from https://studymoose.com/the-importance-of-natural-law-in-aquinas-political-theory-essay 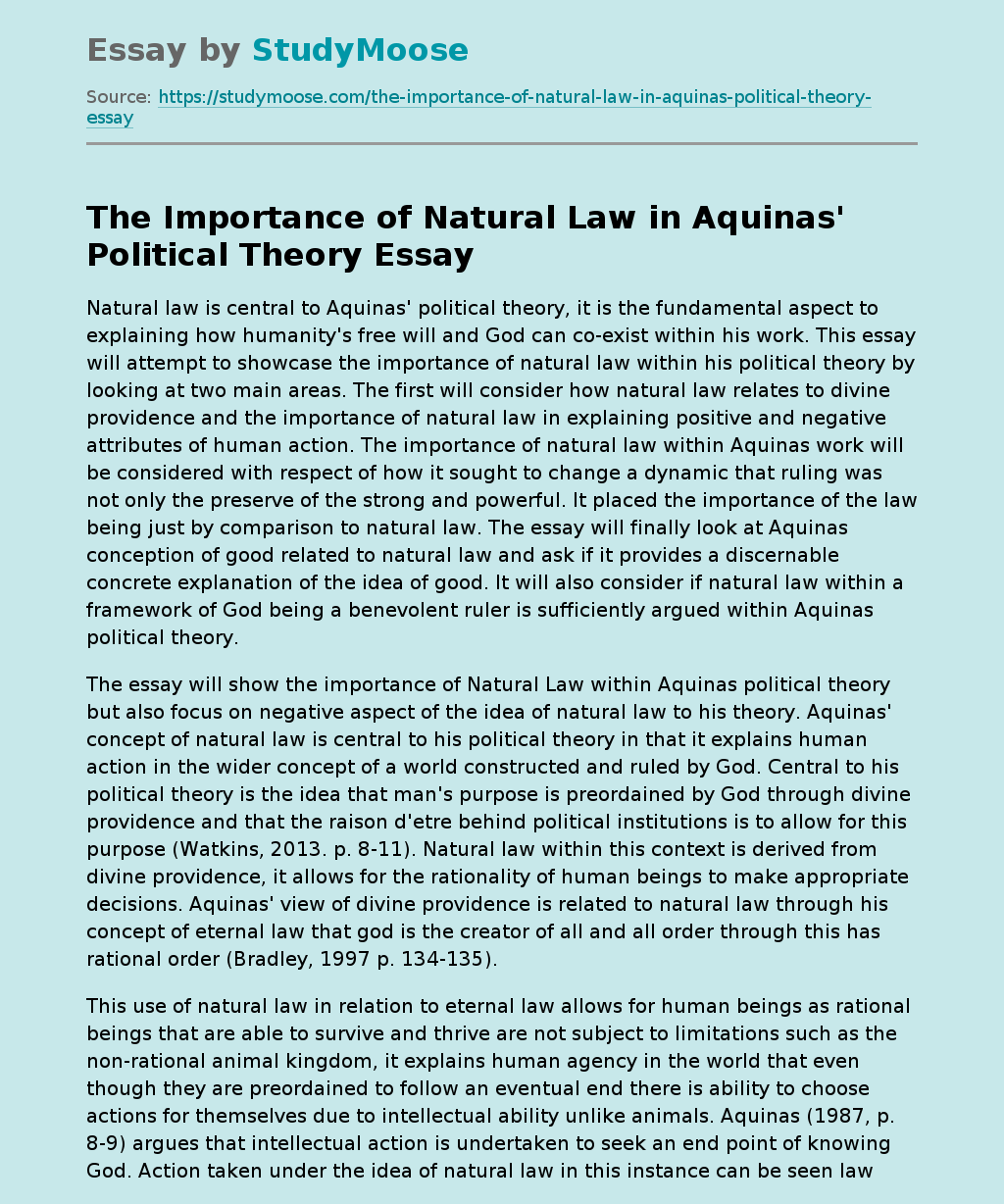