William Shakespeare wrote a group of 154 sonnets between 1592 and 1597, which were compiled and published under the title Shakespeare’s Sonnets in 1609. Our attention will focus on sonnet 12, a remarkable and poignant poem about the relentless passing of time, the fading beauty, immortality, death and Old Age, these subjects being typical of all Shakespeare’s Sonnets.

Time is omnipresent in everyone’s life, just passing and passing inexorably, relentlessly, so unstoppable. It is a universal problem : people have always been very worried about time, trying to gain some, or angry they have lost this precious element.

Don't use plagiarized sources. Get your custom essay on
“ Critical Analysis on Sonnet 12 by William Shakespeare ”
Get custom paper
NEW! smart matching with writer

Moreover, “Time is Money”, maxim born in the business sector, is now an adage applied in all matter. But still, it is not possible to lose or gain time : it is above people, nobody has control on it. This is what Shakespeare tells us in this sonnet.

What is more, just by hearing it, without understanding the words, it is possible to guess that it is about time. Shakespeare has used an iambic pentametre, which the alternation of strong and weak rhythms reproduces the ticking of the clock, displaying the passing of time. Furthermore, the way in which the meaning of the line finishes with the line itself, with punctuation such as comma and semi-colon at the end of each line, is like the inexorable motion of a pendulum as it beats from side to side.

The fact that each line contains ten syllables contributes as well to this idea of regularity and time.

We should also mention the presence of alliterations like c and t line 1 (count, clock, that, tells, time), imitating the ticking of the clock, and the repetition of consonants like p line 3 (past, prime), or s and g line 7 (summer’s, green, girded, sheaves), b line 8 (borne, bier, bristly, beard), without forgetting the sibilance line 11 (since, sweets, beauties, themselves, forsake). These alliterations slow down the sonnet and give it a measured rhythm, drawing the reader in an infernal cycle, in a lethargic state.

We can observe the way the subject is developed by looking at the two main phases in this sonnet : the first eight lines are a phase of observation, study : we perceive how nature fades and dies, how time passes, as nothing can be done against it. But then, in the second part, Shakespeare opens up his past observation – that was on nature – in an examination based on humans. Nevertheless, these two phases are very similar, offering the same message to the reader : time is devastating and invincible.

But before presenting these two main phases, we should not forget to precise that in each of these parts, a narrator appears, speaking at the first person, thanks to the pronoun “I”, line 1, 3, 5 and 9. The question coming immediately in our mind is who is hiding behind this “I” and who is this “I” addressing to ? I do not know whether Shakespeare has created a character, or if he is really expressing his point of view through the sonnet, but if he does so, we can observe that he adopts a different opinion in sonnet 18.

Therefore, in sonnet 18, he promises his addressee he will be immortalized through the sonnet itself : “so long lives this, and this gives life to thee”, while in sonnet 12, he believes procreation to be the only way to live forever : “save breed to brave him when he takes thee hence”. Officially, the first 156 sonnets are addressed to a dear young man, fading somewhat the romantic image all people have about Shakespeare and his works.

Now that we have talked about the sender and the receiver, let us concentrate on the different images, symbols and statements delivering the message.

The first part of this poem describes nature. Indeed, the narrator is exposed counting the clock chimes – giving by the way an audible sound to the reader -, and the narrator appears very passive and resigned : he seems to know that time cannot be fought, waiting for it to pass, in a submissive manner. In the same way, the day looks already defeated, but it tries, unlike the “I”, to fight, as suggest the adjective “brave”, introducing a notion of combat. However, this is not the only meaning of this word, brave being polysemic : it has almost a visual significance, evoking brightness and gallantry. Thus, Shakespeare joins an attracting adjective to the “day”, to finally make it appear even more vulnerable and pathetic, thanks to “hideous night”. This opposition between “brave day” and “hideous night” emphasizes the day’s weakness against the night, literally sinking in the night. This verb, sink, represents a long action and gives us the idea that we cannot discern the limits between day and night, we cannot point out “this is day”, “this is night”.

It is something we are not aware of, we cannot see happening, until night has completely taken the place. This domination and hopeless fight could imply, by extension, that any struggle in life is a useless task. The violet is also under time control : it is once at its prime state, at springtime best, being emblematic of Spring and new growth, but then soon fades and dies. Here is presented the decaying of nature and furthermore of human, as violet is like a human being : once at its prime, then dying. Shakespeare presents us the same kind of image in the next line, describing sable curls, namely dark hair, having turned white due to the age. This word sable brings nobility, rarity and softness to the curls, but then is even more put down – as it is more precious -, by the whiteness. Behind this description, it is the youth coming to old age which is depicted. “Barren of leaves”, line 6 indicates us what period the poem is describing : the autumn, season of death and sadness.

The trees, which used to be tall and majestic : “lofty”, are now leafless : all that remains are bare branches. Shakespeare is also suggesting that they are useless, while they used to have a significant role : to protect the herd from the heat of the sun. Thus, it suggests again the fact that everybody, even the more majestic one, will fade one day, that the destructive process of age does not forget anyone, and that old people are useless. We can discover another image insisting on the idea that the passing of time leaves you with nothing, line 7 and 8. By an agricultural image : the sheaves of corn growing during the summer and being tied carried away on a bier, Shakespeare actually represents death – the final stage -, with the sheaves in the coffin which can be associated with an old person in a coffin : “white and bristly beard”.

All these images denoting Nature have actually been used as examples to illustrate Shakespeare’s views on time and the human being. In a second phase, the sonnet expresses the idea of human beauty fading as the time passes, but also of the renewable cycle, of a continuous mutation, of the constant presence of a next generation. Basically, there is no way escaping “Time’s scythe” line 13, except having children.

Another important subject in this poem, besides linked up with time, is immortality. It is possible to feel how this relentless passing of time is a very serious issue for the narrator, affecting his mind, as he is trying to find a solution to this problem. Thus, we get aware of the consequences of time, making people grow old : “white and bristly beard” line 8 ; “since sweets and beauties do themselves forsake” line 11. The narrator draws our attention on the infernal cycle of life : “and die as fast as they see others grow” line 12, and probably wants to denounce the sentiment of immortality all young people have in themselves, thinking they will always stay young and have their whole life in front of them forever. Being a teenager, I have this feeling too : how could I imagine, being fifteen, that I will be seventy one day ? However, like Shakespeare suggests in this sonnet, life is a cycle, people dying as fast as others grow. The solution offered here in the rhyming couplet is to have children to be immortal.

One must admit that the narrator is absolutely right, children representing a source of youth, and a way of printing his foot on the earth. By giving birth to a child, people are sure they will live in someone’s mind forever, and be mentioned as the time passes by the family, thanks to genealogical trees for instance. Moreover, parents bring up their children in their way : they pass values and rules on to them, but also a name and a way of thinking and living. However, it cannot be denied that there are other methods to remain alive, to immortalize his existence on earth, like accomplishing a great action – good or bad – or writing an autobiography.

I have liked this sonnet very much, for the form represents and illustrates the meaning in a brilliant way. It was also very interesting to, step by step, analyze this poem to finally have a good understanding of it, while it was almost incomprehensible at first. Death, the passing of time, the Old Age and the desire of immortality are universal themes which touched everybody, and have, them, crossed the time. 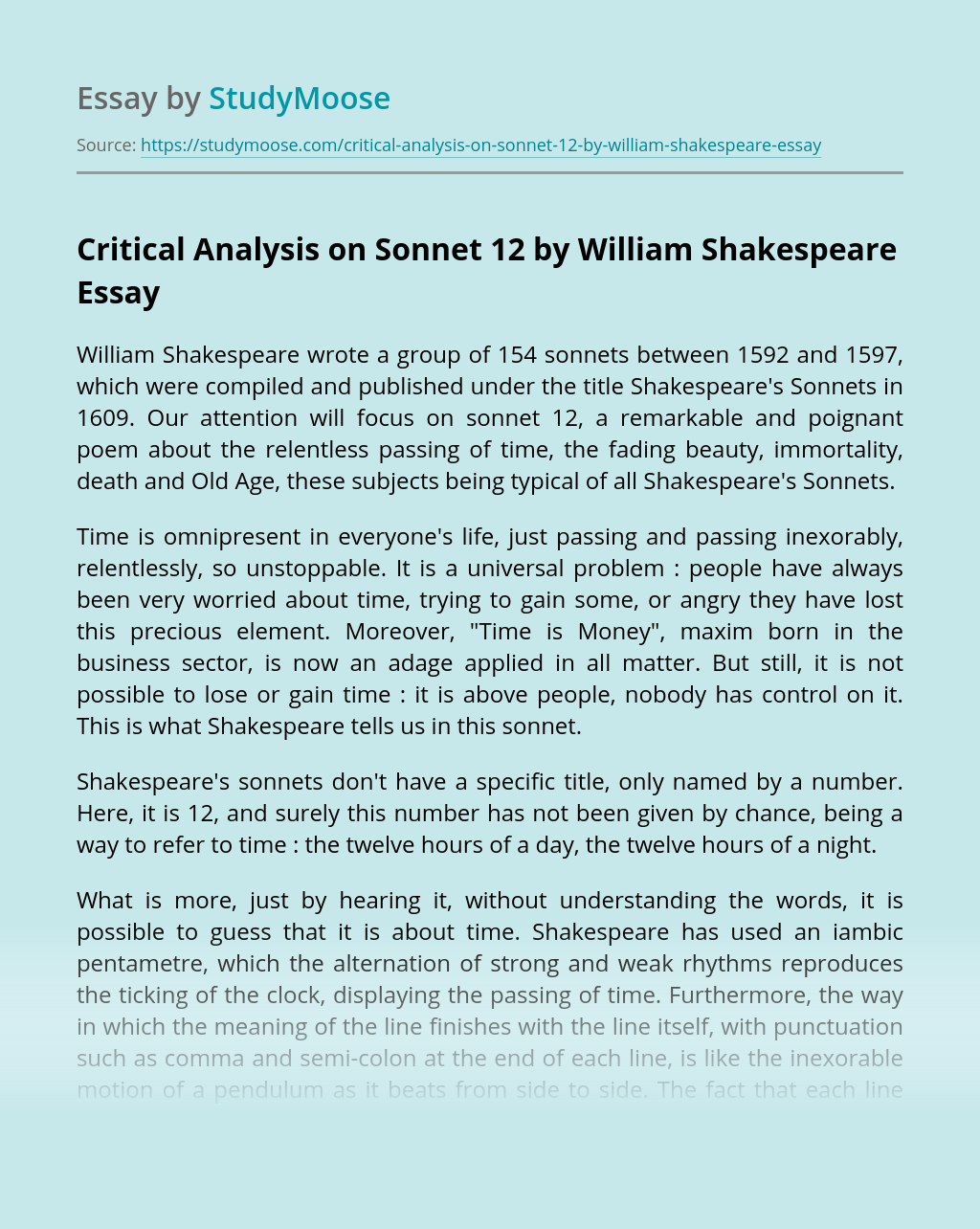