Orientalism as a lens to A Passage in India

Orientalism is described by Edward Said as an integral part of European civilization and culture. Orientalism has been a part of the culture globally. The author of “Orientalism“ had used three types of definition in his essay. Academically, Said had defined Orientalism is as a label. Anyone who studies and seeks information about the Orient can be considered an Orientalist. He had also defined Orientalism as the study of the Orient. However, it can also be considered as an ideology based on “ontological and epistemological” difference between the Occident and the Orient like what the author did to the Passage to India.

Don't use plagiarized sources. Get your custom essay on
“ Orientalism as a lens to A Passage in India ”
Get custom paper
NEW! smart matching with writer

As stated in the text, the comparison of both worlds where the inland natives and the Europeans is clearly seen and differentiated. In the text, the author of the passage to India said that “Chandrapore was never large or beautiful, but two hundred years ago it lay on the road between Upper India, then Imperial and the sea, and the fine houses date from that period.

” This passage shows that the author viewed the place as beautiful during the colonization period. Politically, it is a known fact that the Occident or the Western part of the globe (Europe) had dominated the Orient.

This relationship gives a presence of power domination of the Occident against the Orient. Therefore as Said explains in his introduction, Orientalism is believed to be more of a sign of European Atlantic power over the orient. Furthermore Orientalism shows the superiority of the Westerners as a race, as described by Denys Hay.

In the Passage to India, there had been a description regarding the democracy of the people who lives in Chandrapore. “The zest for decoration stopped in the eighteenth century, nor was it ever democratic.

This only shows that the decorations and the like are dictated by the colonizer. The view of the author in “A Passage to India” only shows that the author sees the natives as nomads. Socially, the aspect of Orientalism is also studied by Said as an exchange between individual authors and the large political concerns from the three races who had colonized the Orient, namely British, French and Americans. The author describes the word Orientalism as a word that had been used by the west. Orientalism is seen as a system of citation from authors.

The cultural role played by the Orient in the west had connected the word to the ideology, politics, the logic of power and relevance. The essay “A Passage to India” illustrates the difference of times from the colonization period and the present times. This is shown in the same passage shown above “Chandrapore was never large nor beautiful, but two hundred years ago it lay on the road…and the fine houses date from that period.

The zest for decoration stopped, nor was it ever democratic. From this passage, the author shows that in the eighteenth century, fine houses and decorations are mandated by the colonizers during that time. It had described the times before as the glorious years and as such prosperous and a very profitable city. However, the author believes that through time, there are several changes that had made the city that way in the present. As such the author describes the place as lifeless and unholy, this is so because there was a note in the passage in the first paragraph that “Ganges is not holy here”. The river Ganges is considered as a holy place in India.

Through that statement it shows that the author perceives the city of Chandrapore as an unholy place. Furthermore, it can also be understood from the writing style of the author that the only beautiful sight that can behold in a distance are the houses of the Europeans. This can be further verified in the passage “Inland, prospect alters. There is an oval maidan and a…hospital, houses belonging to Eurasians stand on the high ground…” The passage only shows that because the houses are built in high ground it is obvious that the author describes this places as high society.

It also describe that the Europeans are the ones who are benefiting from the land of India. This is so because in the passage written next to the description of the European Houses is the comparison of Chandrapore. It can be seen in this passage “…second rise is laid out in the Civil Station and viewed hence Chandrapre appears to be a totally different place…It is no city but a forest sparsely scattered with huts. ” This only show that the foreigners live in concrete houses in the city, while the original inhabitants of India live in mud huts in the forest.

It is evident in both essays that they are showing the inferiority of the people in the Orient and at the same time the people in the Orient are not doing anything to argue the point. Based on the different descriptions of the places and knowledge that both authors share, it can be seen that they see the Orient as a very prosperous place that is rich in culture. Both authors think that the Westerners had exploited this riches to their benefit. Political issues can be seen in the description of both authors in the text.

In the Orientalism essay, Edward Said thinks that Orientalism represents the opposite of the Occident. If the Occident is very advanced, that is how Orientalism is backward in its ideologies and technology. On the other hand, in A passage to India, it can be seen in the description of the text. The place where Eurasians lived were described as a city with complete amenities such as the hospital and houses. However, on the other side of the land is Chandrapore, which the author describes as a city of gardens.

This could mean that the author sees that the Eurasians live in houses while the Indians live in the forest. As a conclusion, both authors are partly right in their claim that Orientalism had been a word used by the Westerners to show their superiority over the Orient as stated by Said in Orientalism. This domination is also seen in the essay “A Passage to India”. As mentioned in the essay “A Passage to India”, Europeans had created an environment that is prosperous compared to where the Indians reside.

However, it must be noted that the Oriental people had been the ones who had let the colonization happened. The thinking of the Orients and the Westerners are different in terms of colonization. Orientalism can be a very strong word and as the author said this is an ideology of the Orient and as such, the word must not be used as a representation of who is superior over the other. A Passage to India had shown the different ways of life before and also the different lifestyles that the colonizers and original inhabitants of the place.

The essay of the A Passage to India can be patterned after the Orientalism of Said in a different way, Orientalism showed the difference of both worlds through culture, A Passage to India showed the difference through the lifestyles. As such, one can conclude that the Orient had let the domination of the Westerners happen. In other words it can also be described that the Orients had welcomed the invasion of the Westerners because they had given additional knowledge, culture and beliefs to the Orients.

Orientalism as a lens to A Passage in India. (2017, Mar 06). Retrieved from https://studymoose.com/orientalism-as-a-lens-to-a-passage-in-india-essay 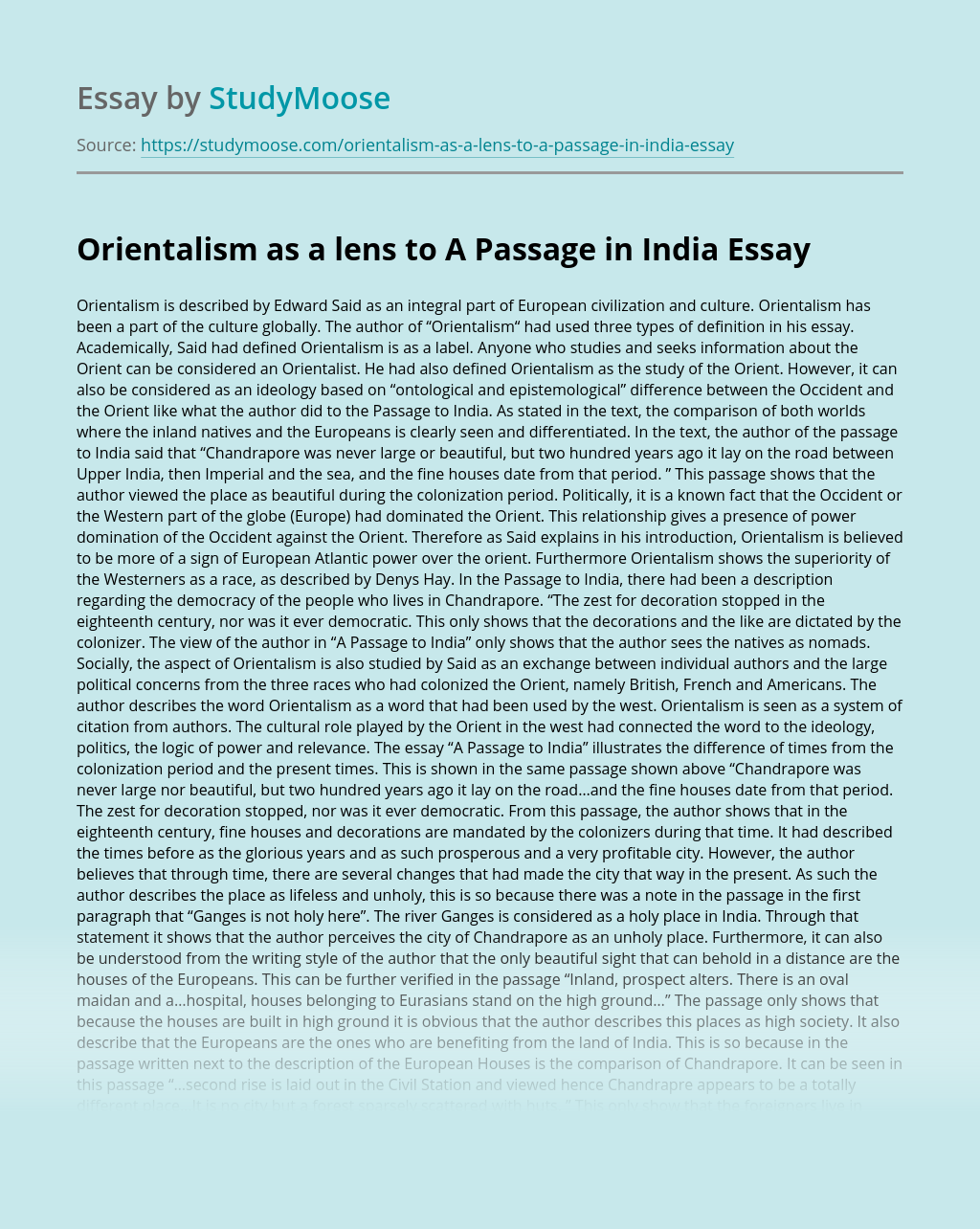