The Difficulty of English- Indian Friendship in "A Passage to India"

In his “A Passage to India”, Forster explores the possibility of English-Indian Friendship. He begins and ends by posing the question of whether it is possible for an Englishman and an Indian to ever be friends, at least within the context of British colonialism.

Thus, as soon as the novel opens, the reader is introduced to an argument, between Mahmoud Ali, Hamidullah, and, Aziz raising this English-Indian-friendship question. The argument is quite significant because it sets the tone of the novel and introduces the different Indian attitudes towards the issue.

Turn in your highest-quality paper
Get a qualified writer to help you with
“ The Difficulty of English- Indian Friendship in “A Passage to India” ”
Get high-quality paper
NEW! AI matching with writers

For instance, Mahmoud Ali, who has known the English only in India, claims that such friendship is impossible. Educated at Cambridge, Hamidullah says that it is possible to have such friendship only in England, because the English change when they live in India: “They all become exactly the same– not worse, not better. I give any Englishman two years, be he Turton or Burton. It is only a difference of a letter.

And I give any Englishwoman six months.” Aziz, on the other hand, has an indifferent scornful attitude towards the argument: “Why be either friends with the fellows or not friends? Let us shut them out and be jolly.”Forster uses personal relationships between Mrs. Moore and Adela, and the Indians to examine the theme of friendship between Englishwomen and Indians. Adela and Mrs. Moore question the standard behaviors of the English towards the Indians and try to connect with the Indians at the Bridge Party and at Fielding’s afternoon tea.

However, Mrs. Moore’s curiosity to see the ‘real India’ is, unlike that of Adela’s, bolstered by a genuine affection for Indians. Thus, Mrs. Moore breaks the distrust that Forster initially establishes towards all Englishwomen, through her tenderness towards Aziz, who calls her an ‘Oriental.’ Her genuine kindness maintains her place in Aziz’s heart and motivates him to behave with more kindness towards both Adela and Ralph even after her death. Thus, Godbole’s vision of Mrs. Moore at the Indian ceremony is not quite surprising, for her successful interaction with the Indian culture makes her part of it: “He had, with increasing vividness, again seen Mrs. Moore He was a Brahman, she Christian, but it made no difference whether she was a trick of his memory or a telepathic appeal.”Forster also uses the English-Indian-friendship question as a framework to explore the general issue of Britains political control of India on a more personal level, through the friendship between Aziz and Fielding.

At the beginning of the novel, Aziz is scornful of the English, wishing only to consider them comically or ignore them completely. Yet, the intuitive connection Aziz feels with Mrs. Moore in the mosque opens him to the possibility of friendship with Fielding. He is impressed by Fielding’s honesty and tolerance that encourage him to open his heart to Fielding: “Mr. Fielding, no one can ever realize how much kindness we Indians need, we do not even realize it ourselves.” Therefore, Fielding and Aziz represent a positive model of liberal humanism through the first half of the novel. Forster suggests that British rule in India could be successful and respectful if only English and Indians treated each other mutual respect.

However, Forster demonstrates that cultural differences, which come to the light during and in the aftermath of the trial, make it hard for an English-Indian friendship to survive, even in the presence of mutual respect. Working with Indians, Fielding realizes the futility of trying to bridge the gap between himself and the Indians: “At the moment when he was throwing his lot with Indians, he realized the profundity of the gulf that divided him from them. They always do something disappointing. Aziz had tried to run away from the police, Mohammed Latif had not checked the pilfering. And now Hamidullah! instead of raging and denouncing, he temporized. Are Indian cowards? No, but they are bad starters and occasionally jib.” Therefore, after the trial, Aziz and Fielding suffer from the tendencies of their cultures: “Tangles like this still interrupted their intercourse. A pause in the wrong place, an intonation misunderstood, and a whole conversation went awry.”

On the one hand, Aziz imagination betrays him, and his suspicion hardens into grudge: “Suspicion in the Oriental is a sort of a malignant tumour, a mental malady, that makes him self-conscious and unfriendly suddenly Aziz was seized by it, and his fancy built a satanic castle, of which the foundation had been laid when Fielding and he talked at Dilkusha under the stars.” On the other hand, Fielding suffers from an English literalism and rationalism that blind him to Azizs true feelings and make him too stilted to reach out to Aziz. He, for instance, criticizes Aziz, referring to his vindictiveness towards Adela, for never having his emotions in proportion to their objects, where Aziz replies saying: “Is emotion a sack of potatoes, so much the pound, to be measured out? Am I a machine? I shall be told I can use up my emotions by using them, next.” Furthermore, their Indian and English communities pull them apart through their mutual stereotyping.

Thus, Forster uses Fielding to examine a fluid conception of race, in which belonging to a particular culture does not necessitate supporting its race. Forster employs Fielding to embody his liberal-humanistic views: “The world, he believed, is a globe of men who are trying to reach one another and can best do so by the help of goodwill plus culture and intelligence.” At the beginning of the novel, Fielding can easily maneuver between associations with the English and the Indians, despite the fact that he is an outcast among English women: “Still, the men tolerated him for the sake of his good heart and strong body, it was their wives who decided he was not a sahib really. They disliked him. He took no notice of them” Nonetheless, Fielding loses this freedom of association when he joins the Indians in the defense of Aziz and insults his countrymen; as a result, he is uneasy about his decision: “He regretted taking sides. To slink through India unlabelled was aim.”

Besides, deep in his heart Fielding knows that he can not disown his race, for ‘the man who does not toe the line is lost.’ Thus, Fielding’s developing friendship with Adela is not only out of sympathy or their being outcasts, but also out of yearning to rejoin his race: “A friendliness, as of dwarfs shaking the hands, was in the air. Both man and woman were at the height of their powers _ sensible, honest, even subtle. They spoke the same language, and held the same opinions, and the variety of age and sex did not divide them.” By the end of the novel, Fielding realizes that he is a true Englishman, and that he belongs among his own race; to defy his race and maintain a friendship with Aziz would be just but not pragmatic. His fluid conception of race is, thus, not a great success.

Forster employs the motif of “the insufficiency of good intentions” to stress the cultural differences that hinder English-Indian friendship in India. The desire for each party to be polite and sensitive to each other, and of coarse the cultural differences contribute to the misinterpretation of good intentions in many parts of the novel. For instance, the Hindu woman Mrs. Moore offers to visit mistakes the offer for dictation and superiority. Similarly, Aziz misinterprets Fielding’s remark about Post-Impressionism: “In every remark he found a meaning, but not always the true meaning, and his life, though vivid, was largely a dream.” Moreover, Adela’s trying to break the ice by asking Aziz how many wives he has offends him. Aziz’s bribing Antony to have the chance to please his guests also incriminates him in the eyes of the British.

Still, Forster shows that not only do cultural differences and absence of mutual respect hamper English-Indian friendship but also do the British colonial rule and racism. For instance, Anglo-Indian women, including Mrs. Callendar who thinks that “the kindest thing one can do to a native is to let him die,” are shocked at Adela’s desire to meet Indians. Unsurprisingly, the Bridge Party is a failure, because of the British snobbishness and the Indian skepticism and reservation. Forster shows how determined the British authority is against an English-Indian friendship; Mr. Turton says: ” I have never known anything but disaster result when English people and Indians attempt to be intimate socially Intimacy—never, never.” Similarly, the British authority turns the trial against Aziz into a racial conflict; looking at the natives Mr. Turton says: “I know what you’re like at last; you shall pay for this, you shall squeal.”

A Passage to India ends with the same question it begins with; i.e. is it possible to have an English-Indian friendship? The answer Forster, Fielding an Aziz give seems to be “no;” even the landscape of India seems to oppress such friendship: “But the horses didn’t want it they swerved apart; the earth didn’t want it, sending up rocks through which riders must pass single-file; the temples, the tank, the jail, the palace” Yet, the answer to the question is rather pending than negative, where it offers the possibility of friendship on English soil, or after the liberation of India: “No, not yet No, not there.”

The Difficulty of English- Indian Friendship in "A Passage to India". (2016, Jul 05). Retrieved from http://studymoose.com/the-difficulty-of-english-indian-friendship-in-a-passage-to-india-essay 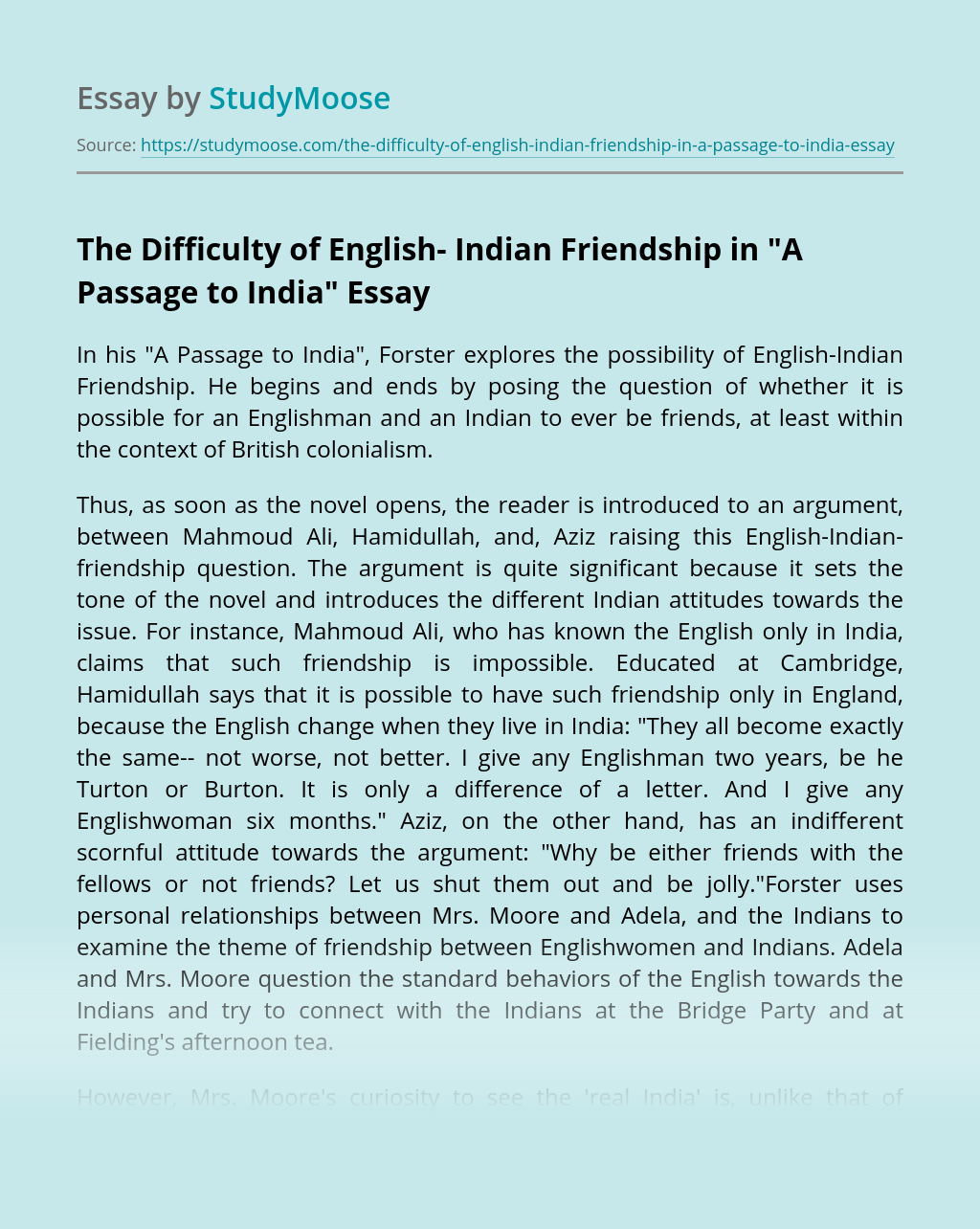 Turn in your highest-quality paper
Get a qualified writer to help you with
“ The Difficulty of English- Indian Friendship in “A Passage to India” ”
Get high-quality paper
Helping students since 2015
Stay Safe, Stay Original