Courage in the Face of Difficulty

We all have a predefined notion of what courage is, whether it be facing our fears, standing up for a personal belief, or sticking up for another person who may be getting picked on. Whatever definition an individual may have for courage, there probably is some sort of emotion that sparks from their heart. In fact, the Latin word for courage is coraticum. The root cor, literally means heart. So the word coraticum is directly translated as, “an action that comes straight from the heart.

Don't use plagiarized sources. Get your custom essay on
“ Courage in the Face of Difficulty ”
Get custom paper
NEW! smart matching with writer

” What exactly defines an action from the heart though?

Most people probably have this perception of courage as, “people who have a sense of bravery or boldness that fight past danger without showing any sign of fear.” Even though we all have this concept of courage, the world around us is changing, and so is the definition of courage. There is no doubt that courage is a unique word, and we as humans strive to be courageous, in whatever way we depict it in our minds, but the reality is that there are multiple ways of being courageous.

An act of courage is always made out to be some noble, heroic action that wins the hearts of many people. There is more than one way to present an act of courage, and we need to open our eyes and realize this.

For many people, the greatest act of courage would be one who risks or gives their life up for someone else. This is perhaps one of the greatest actions a person can make, and one that anyone can have profound respect for.

Putting this aside, can we still acknowledge courage on a smaller scale that we face in our day to day lives? For example, if someone has lost a loved one but they are able to reconcile from that person’s death, is this still considered an act of courage? This example didn’t involve the act of someone giving or risking their life for someone else, but should this still not be considered a courageous act?

It seems that most people want to glorify courage as being some immense deed that seems impossible to accomplish, but in reality, we can all be courageous even if it happens to not be some heroic deed. Courage is not about the grand accomplishments one has made, but rather about the overcoming of fear and the judgment that something else is more important than fear.

The third and final step suggests that an individual is not afraid to persevere, despite the outcome that the situation presents. What is perhaps the most overlooked step is the first step: identifying the obstacle that the individual wants to overcome. This step is typically overlooked because too many people become conceited and under-estimate their obstacle. For example, three-time-heavyweight champion, Muhammad Ali, under-estimated his opponent, Larry Holmes, in what would be one of his final boxing matches. Muhammad Ali was suffering early signs of what became Parkinson’s syndrome, but wanted to challenge Larry Holmes, which was largely driven by his desire of wanting to attain a fourth heavyweight championship, and his motivation for money.

However, Larry Holmes easily defeated Muhammad Ali, and went on to become the heavyweight champion. Instead of identifying the obstacle he wanted to overcome, Muhammad Ali chose to disregard his opponent’s abilities and became blinded by arrogance, which lead to the downfall of his career. Rather than stopping there, he went on to fight one last match with Trevor Berbick which ultimately ended his career. Overlooking the obstacle that an individual wants to overcome can only lead to failure, as it did to Muhammad Ali’s career. When we choose to disregard the hardships that lie ahead of us, we are often too blind to see our own weaknesses and end up failing what we set out to accomplish.

Taking this into consideration, what if Muhammad Ali had not over looked his opponent? If Muhammad Ali had followed through with the first step, he would have recognized his obstacle and taken immediate action to ensure that he did not risk his health or his career for a moment of glory. Though it may not seem like it, it is more courageous of an individual to recognize his or her limits rather than trying to take on an obstacle without a sense of direction. As people of a conceited nature, we tend to under-estimate our targets and let our pride blind us with egotism, and we do not acknowledge the possible consequences of our actions. An individual must always remember to analyze the obstacle he or she desires to triumph over.

For example, in October of 1962, during the Cuban Missile Crisis, John F. Kennedy was strained on how to handle the missile crisis with the Soviet Union. He could have easily fired missiles at the Soviet Union and started a world-wide, nuclear war. Instead, John F. Kennedy was able to both: analyze his opponent, and understand the possible outcomes of his actions. Without letting pride get in the way, President Kennedy successfully negotiated with the Soviet Union and avoided a full blown nuclear war. This perfectly defines what step one entails. If an individual is able to identify the obstacle he or she wants to accomplish, and understands the outcomes of his or her decisions, then he or she is already well on their way on being able to take action, despite the hardships.

This directs us to the second step, which is undoubtedly a challenging step for the individual. It is far easier to identify the obstacle than it is to take action, in spite of the challenges presented by the obstacle. Taking action is an important aspect of the second step. An individual might be able to identify what stands in his or her way, but they must be willing to do something about it. Identifying the problem is only half the battle, and without taking action, progress cannot be made. Without progress, the individual will not be able to accomplish what he or she has set out to do. It is important that the individual understands that there will be a fear that comes with the hardships associated with the obstacle he or she is trying to triumph over.

This fear is what really defines whether a person is really as brave as he or she thinks. Without fear, there cannot be any sense of courage. Rosa Parks is someone that comes to mind when referring to someone that chose to take action despite the hardships. During the times of segregation, rather than giving her seat up to a white man, she stood her ground and refused to give up her seat. This lead to her being put in jail, but this small, yet noble act of courage stands out as a remarkable, courageous event in the history of mankind. While taking action is definitely a bold act, an individual must still be willing to accomplish a goal, in spite of the outcome.

This brings us to the third and final step which is perhaps the hardest step of them all: the individual must continue to persist in achieving their goal regardless of the outcome. Many people falter at this point, simply because their hope in accomplishing the goal is shattered. These individuals, who have made progress in reaching an objective, forget how tough the road to getting to there was, so the hardships are forgotten, and these individuals succumb to exhaustion and failure on what he or she has set out to achieve.

There is one thing that should come to mind when a person sets out to achieve a goal, and that is, “failure is not an option.” Everyone has heard this slogan at one point or another, and it is one that holds true. For example, Bill Gates’ first company, Traf-O-Data, failed miserably. In fact, his company could not sell devices that even functioned properly. This did not deter Bill Gates, but instead encouraged him to create the multi-billion dollar business, Microsoft. Instead of giving in to failure, Bill Gates used failure as a stepping-stone to success. It is because he did not give up, that he is now one of the most successful people in the world today.

Muhammad Ali once said, “He who is not courageous enough to take risks will accomplish nothing in life.” The people who are courageous will always take risks, despite the hardships that come with accomplishing a goal and the outcome of each goal we set out to achieve. With the absence of fear when taking risks, no one can prove that he or she is worthy of being a courageous person. It is without a doubt that a courageous person will always take risks to become triumphant whether it is on a small scale or large scale. As long as the act of courage comes directly from the heart, and the individual gives it their all, then there can be nothing that will stand in his or her way of being victorious.

“Never give in, never back down”

Courage in the Face of Difficulty. (2016, May 07). Retrieved from https://studymoose.com/courage-in-the-face-of-difficulty-essay 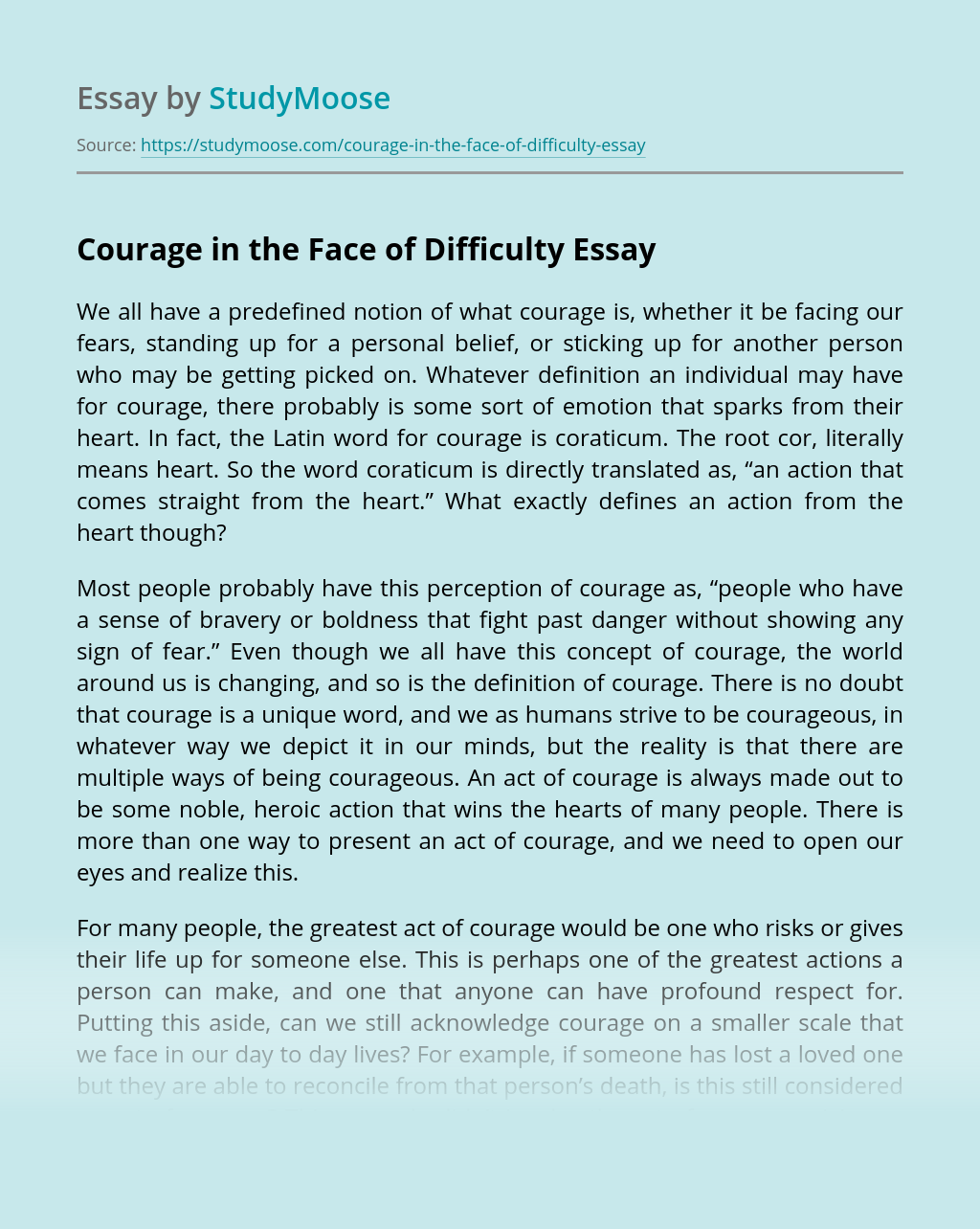