Don't use plagiarized sources. Get your custom essay on
“ Social Networking vs. Face to Face Communication ”
Get custom paper
NEW! smart matching with writer

Face to face communication strongly interprets emotion as opposed to the weak interpretation of social networking. Sarcasm strongly exemplifies the limits on social networking, one cannot express sarcasm through text or chat, but in a face to face conversation one can clearly identify sarcasm from tone of voice and facial expressions. There are frequent misinterpretation of emotion on social websites that usually spark major disputes and cyber bullying. These major disputes are currently known as “Facebook beef” or “Tweef” (twitter beef). With face to face communication it is easy to identify other’s emotions and regulate a response fit to serve the best, this helps grow relationships and interaction.

The rules that govern face to face communication are in favor of expressing emotion.

There are many strict rules that govern interaction for face to face communication that do not exist through social networking. Through social media one is given enough time to collect their thoughts and present them with ease. By means of text or chat one can comfortably say what is on their mind without hesitation since they are not directly in front of that person. As opposed to face to face where one might stutter or hesitate to say what is on their mind given little time to spontaneously come up with a witty response. Interaction itself is completely different with both scenarios, if two people only knew each other online, their relationship would be much weaker than that of a face to face friendship. Although social media allows people to make new friends, that relationship in comparison to meeting someone face to face is insubstantial. Albeit social networking does facilitate face to face interaction and helps make face to face communication much easier.

In regards to distance it is very evident that face to face communication and social networking have major differences. With the prominent rise of social networking, long distance communication is easier than ever. Through social media it has become effortless to communicate with friends and family all around the world in the matter of a few seconds. This prevents tedious travel and saves time and money. With email and sites such as Facebook and Twitter it one can literally communicate with anyone who has an account which can be made effortlessly in the matter of a few minutes. In contrast to the accepted belief that social networking is time consuming and in no way helpful to school, it has been proven that in some cases it can be beneficial. With social websites, email, and Google docs, students can share and discuss their group projects and communicate without the major issue of getting together. 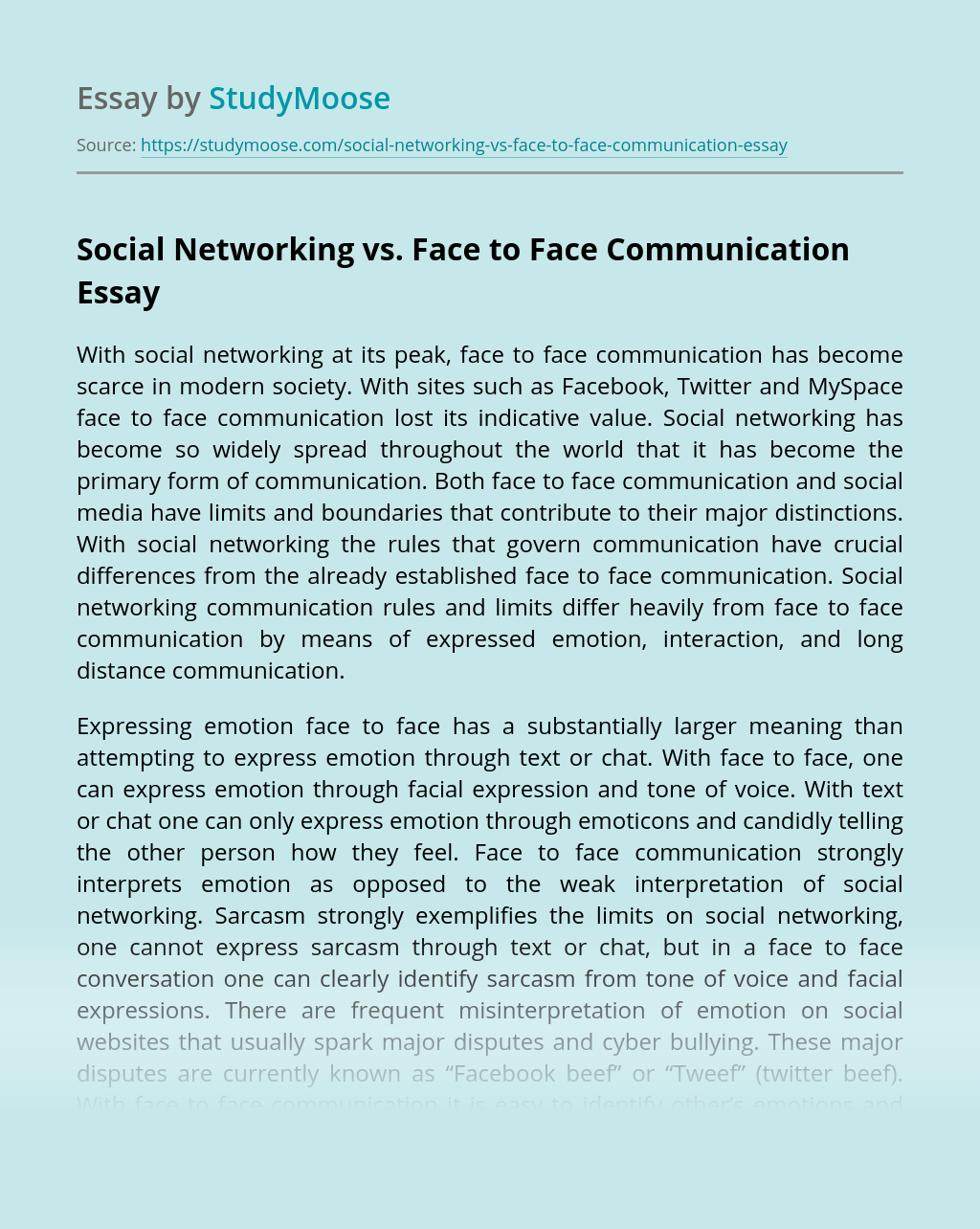