Exposé of Hypocrisy of Imperialism in Conrad's Heart of Darkness

In his novella Heart of Darkness, author Joseph Conrad attempts to expose the hypocrisy of imperialism since its explorers emphasize the importance of helping natives, while actively exploiting them. He also depicts the Africans in the story as nothing more than mindless savages. During his journey to the Congo, Conrad witnessed the horrors firsthand that the Europeans inflicted upon the African natives. He shares his experiences through Marlow, the protagonist, who sees the evil side of humanity through its materialism.

Conrad denounces the oppressive nature of those of his time by exposing their social darwinist thought.

Don’t waste time
Get a verified expert to help you with Exposé of Hypocrisy of Imperialism in Conrad’s Heart of Darkness
Hire verified expert
$35.80 for a 2-page paper

Imperialism is portrayed as a hypocritical tool used purely for the Europeans’ own benefit. Europeans began what is known as “the scramble for Africa” in the late 19th century. The major powers all fought each other to gain control, disregarding the Africans in the process. The Europeans believed themselves to be taking up “the white man’s burden”, which was the belief that the Europeans had a duty to gain control of Africa and civilize the inhabitants in order to help them.

The hypocrisy of it was that what they deemed as helping and civilizing them was actually entirely against the natives’ wishes, as their culture was being destroyed as well as their people enslaved. Conrad depicts this throughout his novel, Conrad denounces oppression by showing racism to criticize the immorality and cruelty of enslaving others for personal gain. Inhumane treatment of the africans is expressed through how they wore rags, which gives a sense of desolation.

Racism is conveyed through the dehumanization of the natives, revealing that their captors went as far to put them in collars, showing they were seen as and treated like dogs. Even Marlow refers to his helmsman as a piece of machinery. Nigerian writer Chinua Achebe, author of Things Fall Apart, famously criticized Heart of Darkness in his 1975 lecture An Image of Africa: Racism in Conrad’s “Heart of Darkness”, saying the novella de-humanized Africans, denied them language and culture and reduced them to a metaphorical extension of the dark and dangerous jungle into which the Europeans venture.

All the European colonists desired was wealth and treasures, willing to go as far as completely exploit other human beings. The metaphor comparing colonists to burglars was used to convey that they had no morals and did whatever they please in order to achieve personal gain, including exploiting them. This is all very hypocritical considering they believed themselves to be helping and civilizing them. Conrad uses Mr. Kurtz to unveil how he feels about imperialism as a whole. Marlow describes how Mr.

Kurtz says everything is his own, which shows that imperialists claimed Africa is theirs and it was okay to exploit the natives as slaves. Conrad uses the dehumanization of Kurtz to exemplify his beliefs to maintain one’s morals to avoid becoming caught up in a world of materialistic desires. Mr. Kurtz is described as having a bald head similar to that of an ivory ball, leading the reader to believe that all he thinks about is ivory. The fact that he is withered is to show Conrad’s belief of what greed will result in upon a person.

Exposé of Hypocrisy of Imperialism in Conrad's Heart of Darkness. (2017, Jan 04). Retrieved from http://studymoose.com/expose-of-hypocrisy-of-imperialism-in-conrads-heart-of-darkness-essay 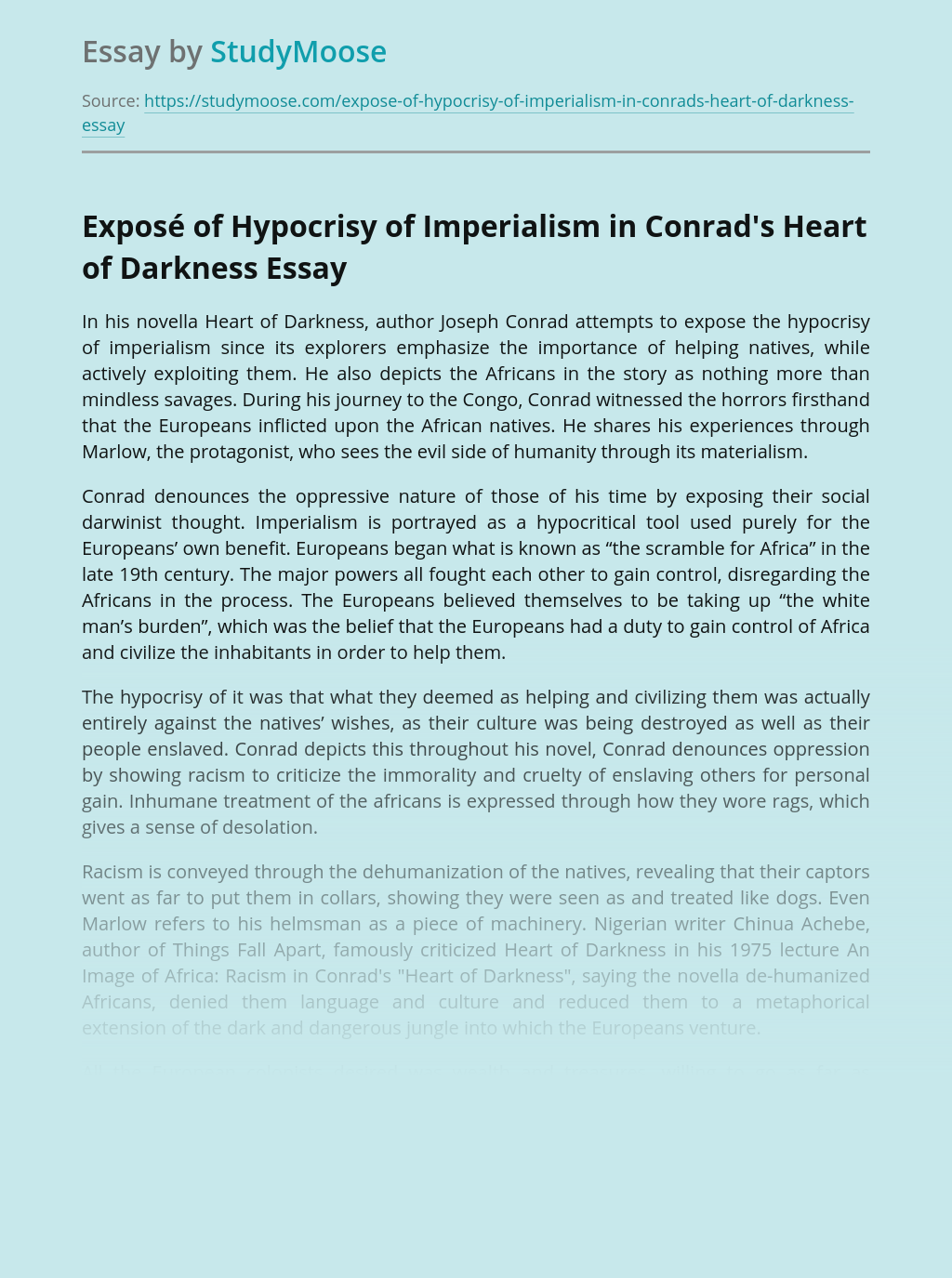 Don’t waste time
Get a verified expert to help you with Exposé of Hypocrisy of Imperialism in Conrad’s Heart of Darkness
Hire verified expert
$35.80 for a 2-page paper
Stay Safe, Stay Original