Aspects of Human Nature in "Heart of Darkness" by Joseph Conrad

Joseph Conrad’s novel Heart of Darkness encompasses many themes and concepts dealing with the very nature of humanity and its complexity. This novel is set up in two different locations, the Thames River and the Congo River. Conrad uses these two rivers to represent the different cultures that clash in this novel, which are the “civilized” and the “savages”. While exploring these two different worlds Conrad exposes the human nature at its core through the characters in this novel proving that not everything is straightforward and is at it seems.

Don't use plagiarized sources. Get your custom essay on
“ Aspects of Human Nature in “Heart of Darkness” by Joseph Conrad ”
Get custom paper
NEW! smart matching with writer

In this novel the Europeans regarded themselves as civilized and cultured. On the other hand, Conrad embeds numerous dark intense imageries to describe this “enlightened” culture such as violent, death, brooding gloom, and more. While the Congo River represents the uncivilized native inhabitants that are described as “utter savagery” (Conrad, 1990, p. 4), but the nature that surrounds the Congo is described as mysterious, glittering, and precious.

The contrast of these locations and representations reveals different aspects of human nature. One un-admirable quality of human nature that is shown is pride.

The European characters in this novel had the mentality that they were superior to the natives. Because of their superior status they felt that European Imperialism and the stations set up were meant for “humanizing, improving, instructing” (Conrad, 1990, p. 29) the uncivilized savages. Instead these civilized European men “Christianizing” and trying to conform the natives to their standards they have succumb to the darkness within the jungle displaying their true nature.

Another aspect of human nature shown by the ironic descriptions of the “civilized” and “uncivilized” locations is man’s destructive nature.

There were numerous events in this novel that portrayed man’s destructive nature due to ulterior motives. An example that destructive behaviors are apart of human nature is when Kurtz raids countless tribes for ivory for the very purpose of gaining wealth and power. Another example of man’s destructive nature is when numbers of “pilgrims used to turn out in a body [hippopotamus] and empty every rifle they could lay hands on at him. Some even had sat up o’nights for him. ” (Conrad, 1990, p. 25). These men waited for and wasted shots just to kill an old and innocent creature not for survival purposes, but for amusement.

Conrad enforces the concept of mans destructive nature in the beginning of the novel when he is describing the “civilized” world. An example on page one Conrad describes the scenery of this “superior” civilization as “The air was dark above Gravesend, and farther back still seemed condensed into a mournful gloom, brooding motionless… ” Later on in the novel Marlow reads Kurtz pamphlet and is led to believe that Kurtz is not another greedy, self – serving, and power crazed individual like the many characters he has met up with on his journey, but that Kurtz shares the same beliefs that he does.

Marlow’s belief that the purpose of European Imperialism in Africa was to improve the culture and to benefit them equally rather than cause chaos for their own personal gain. Marlow’s excitement to meet Kurtz based off his pamphlet and how well everyone speaks of him is an example of how not everything is straightforward. Kurtz wrote his pamphlet in a way that intrigued Marlow and convinced him that they shared the same beliefs, but when Marlow finally met Kurtz he realized that Kurtz is ill physically and mentally. Trickery and inconsistency is embedded within human nature.

As much as one would like to believe that humans are consistent and honest, that is not true and apparent in this novel. The main character is not exempt from human tendencies of inconsistency. Earlier on in the novel Marlow states, “I hate, detest, and can’t bear a lie,” (Conrad, 1990, p. 23). On the other hand at the end of the book he lies to Kurt’s intended to give her sense of peace and saves her from more pain and grief. Though his reasoning is not selfish he still went against his own beliefs and proves inconsistency.

Throughout this entire novel Conrad introduces several European characters that portrayed so many non – admirable qualities such as greed, arrogance, envy, vengeance, sloth, and much more. Yet they are considered the “civilized” ones. Ironically the cannibals and the other natives in this novel show more admirable qualities such as loyalty, hard work, obedient, strong will, and most importantly restraint. While the civilized men were plotting against one another thinking only of themselves the natives displayed much more honorable character. For example, the native tribes that pledged their loyalty to Kurtz were obedient and remained loyal.

They would accompany him on expeditions and kill on his command. Another example of honorable qualities portrayed by these “uncivilized savages” was restraint. The cannibals that assisted Marlow on his journey had been starving for months and never made a move to attack their fellow crew- members. These “heathens” displayed true character in this situation because “It takes a man all his inborn strength to fight hunger properly. It’s really easier to face bereavement, dishonor, and the perdition of one’s soul – than this prolonged hunger … no earthly reason for any kind of scruple.

Restraint! … the fact facing me – the dazzling fact. ” (Conrad, 1990, p. 38). Through the novel “Heart of Darkness” Conrad portrays and exposes human nature at its best and at its worst. Conrad embeds irony throughout the entire novel to show that not everything is as it seems and that when involving humans there are contradictions. The main point that Conrad is conveying to his reader is that technological advances do not make a culture superior or civilized, but rather the moral code that they live by. There is not one culture superior to the other.

Also that each human being is responsible for their own civil or savage behaviors. What makes one civilized is based off of what they do when no one else is around and how they react to any given situation good or terrible. This novel served as a warning from Conrad of man’s true darkness and the “human secrets that baffle probability”. (Conrad, 1990, p. 37). One is not civilized based on where they grew up, but their reactions to the world they live in. To be civilized is to act with morality, but to be a savage is to embrace the heart of darkness.

Aspects of Human Nature in "Heart of Darkness" by Joseph Conrad. (2016, Nov 13). Retrieved from https://studymoose.com/aspects-of-human-nature-in-heart-of-darkness-by-joseph-conrad-essay 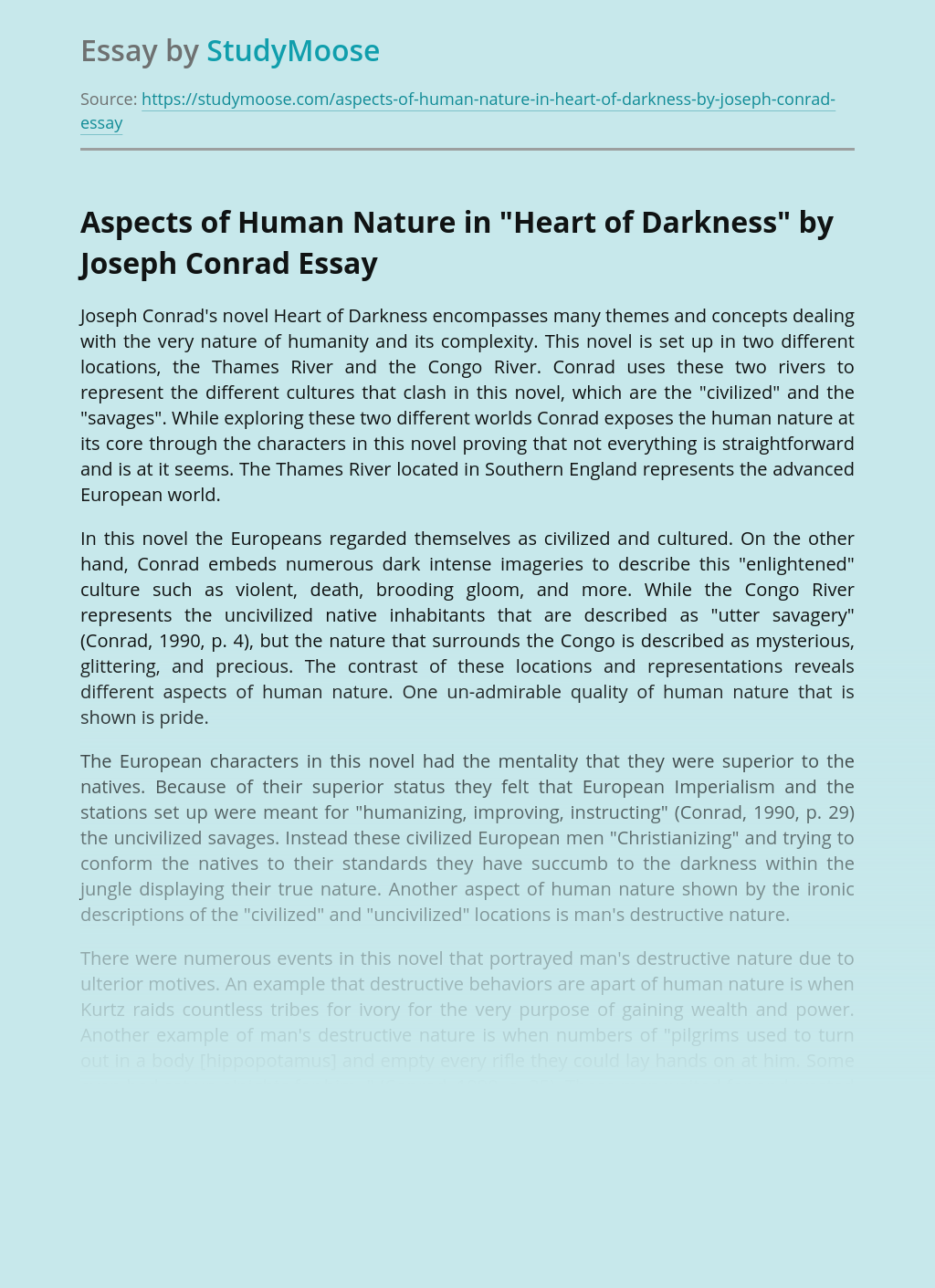