The Absurdity of Evil: The Analysis of Joseph Conrad’s “Heart of Darkness"

Unlike the majority of novels that focus on the evils of colonialism, “Heart of Darkness” pays more attention to the physical destruction of the characters than it does to the devastation of the black natives. Nature acts as a backdrop, being the relentless force that entices the characters to reveal the savagery of imperialism effects on them, destroying their pretentions and showing the darkness that lies in their hearts. The topics of nature and savagery, two distinctively different topics interconnect in such a unique way in the story that it reveals the absurd amounts of evil that have relinquish its calamitous effects on the colonizers.

Don't use plagiarized sources. Get your custom essay on
“ The Absurdity of Evil: The Analysis of Joseph Conrad’s “Heart of Darkness” ”
Get custom paper
NEW! smart matching with writer

In this story, nature unleashes its savagery on the colonizers for taking what’s not theirs by foreshadowing their impending doom and loss of their mental stability. Conrad’s rich use of imagery and symbolism helps the reader to connect the two topics of nature and savagery.

In the quote “I looked around, and I don’t know why, but I assure you that never, never before, did this land, this river, this jungle, the very arch of this blazing sky, appear to me so hopeless and so dark, so impenetrable to human thought, so pitiless to human weakness” (Conrad 252).

This quote shows Marlow’s realization to what was becoming of them. Nature is described as the relentless force that is in a way getting revenge on the colonizers for their inhumane savagery by releasing its own savagery upon them. Nature is described as “Pitiless to human weakness” in this case the Africans aren’t the weaker group though they are illtreated by the imperialist, Conrad’s uses nature to portray and reveal the colonizers as the weaker group.

Hence proving my claim that the British imperialist is suffering far worse than those they made suffer. The message that Conrad is trying to convey is not much the colonization of Africa but more so the colonization of the imperialist minds by savagery, greed, and madness with nature playing a big part in making this happen. Another quote that Conrad uses in relation to nature and weakness is “I tried to break the spell…the heavy, mute spell of the wilderness…that seemed to draw him to its pitiless breast by the awakening of forgotten and brutal instincts, by the memory of gratified and monstrous passions. This alone, I was convinced, had driven him out to the edge of the forest, to the bush, towards the gleam of fires, the throb of drums, the drone of weird incantations; this alone had beguiled his unlawful soul beyond the bounds of permitted aspirations'(Conrad 260). This quote shows just how badly the wilderness is starting to affect Marlow. Conrad uses nature to induce fear into Marlow, the irony in this quote is the imperialist are supposed to be the ones to be feared but, in this case, nature helps the natives to scare the imperialist once again showing the true weakness that lies in the imperialist.

Kurtz suffers the consequences of his actions the most in the story being that he was the cruelest and ruthless one of them all. After doing extensive research I found that the article by Church Andrea brought up and interesting take of this quote from the story “I returned deliberately to the first I had seen—and there it was, black, dried, sunken, with closed eyelids—a head that seemed to sleep at the top of that pole, and, with the shrunken dry lips showing a narrow white line of the teeth, was smiling, too, smiling continuously at some endless and jocose dream of that eternal slumber” (Conrad 253). The author states that the head that Malow specifically described represented Kurtz due to the effect of the wilderness stating that the shrunken dry lips illustrate the futility of “the voice” of Kurtz which becomes threated by the horrible and deadly effects of the wilderness (Church 2). To further add to what Church is trying to convey about the heads, I would like to add to that with this line from the story “These round knobs were not ornamental but symbolic; they were expressive and puzzling, striking and disturbing” (Conrad 253). Marlow calling the heads “symbolic,” Conrad makes the reader question in what way would the heads be symbolized aside from the fact of Kurtz inhumane tendencies. Andrea Church sheds the light or in this case the symbolic darkness of the head and Kurtz. The head not only shows Kurtz cruelty, but it represents how weak he has become to the point where he mimics the look of the shrunken head. Also, the author of the article forgot to mention the fact that the head was “smiling” From my point of view the smiling action of the head may be the way nature is showing satisfaction to the state Kurtz has to succumb to, meaning that justice was finally being served because Kurtz mental stability was diminishing much like Kurtz was becoming weaker as the wilderness further impacts him.

Another article “Shelters and Enclosures” written by Terrence Bowers use the symbolism of the shelters and enclosures in the story “Heart of Darkness” to portray a much deeper meaning beyond the moral and political aspects of the story. Divulging into humanity’s larger struggle with nature in which humanity appears to lose later on. I would like to bring up a quote that I really liked that the author used which was “amongst a waste of excavations or hanging to the declivity… a boiler wallowing in the grass and a “railway-truck lying . . . on its back . . . dead as the carcass of some animal” (Conrad 218). This article critically analyzed Conrad’s incorporation of the settlements and vegetation to convey the power struggle for existence. With buildings being buried by vegetation and human beings becoming animals. To extend further to what Bowers is saying, I think Conrad uses nature as an antagonist towards mankind in the novella. Since this scene is from the beginning of the story it shows how nature is slowly taking down the imperialist by starting with shelters and enclosures and it further foreshadows how nature is far more powerful than the imperialist taking down the greatest of them all, Kurtz in the end. A quote that support this would be “The brown current ran swiftly out of the heart of darkness, bearing us down towards the sea with twice the speed of our upward progress; and Kurtz’s life was running swiftly, too, ebbing, ebbing out of his heart into the sea of inexorable time” As the crew along with Kurtz begin to voyage back with the ivory. Conrad illustrates the image of the river and “the heart of darkness” which it penetrates. Aside from the brown current of the river inexorable brings him back to the white civilization. As the crew leaves “the heart of darkness” Kurtz life slowly fades due to his loss of the darkness which shows that Kurtz and the darkness is one and the same. Marlow is also permanently etched in the darkness.

Based on the evidence presented it can be seen that nature’s savagery has taken a toll on the imperialist making the imperialist the weak ones. The interconnectedness between nature and weakness lies within the imperialist. The imperialist in the story acted as a joining force between these two topics. These two topics and its conjoining elements help the reader to understand the real meaning behind the story. That being said, the colonizers have succumbed to the force of nature and have been tarnished the most by its brutality and savagery for their sinister deeds.

The Absurdity of Evil: The Analysis of Joseph Conrad’s “Heart of Darkness". (2021, Mar 19). Retrieved from https://studymoose.com/the-absurdity-of-evil-the-analysis-of-joseph-conrad-s-heart-of-darkness-essay 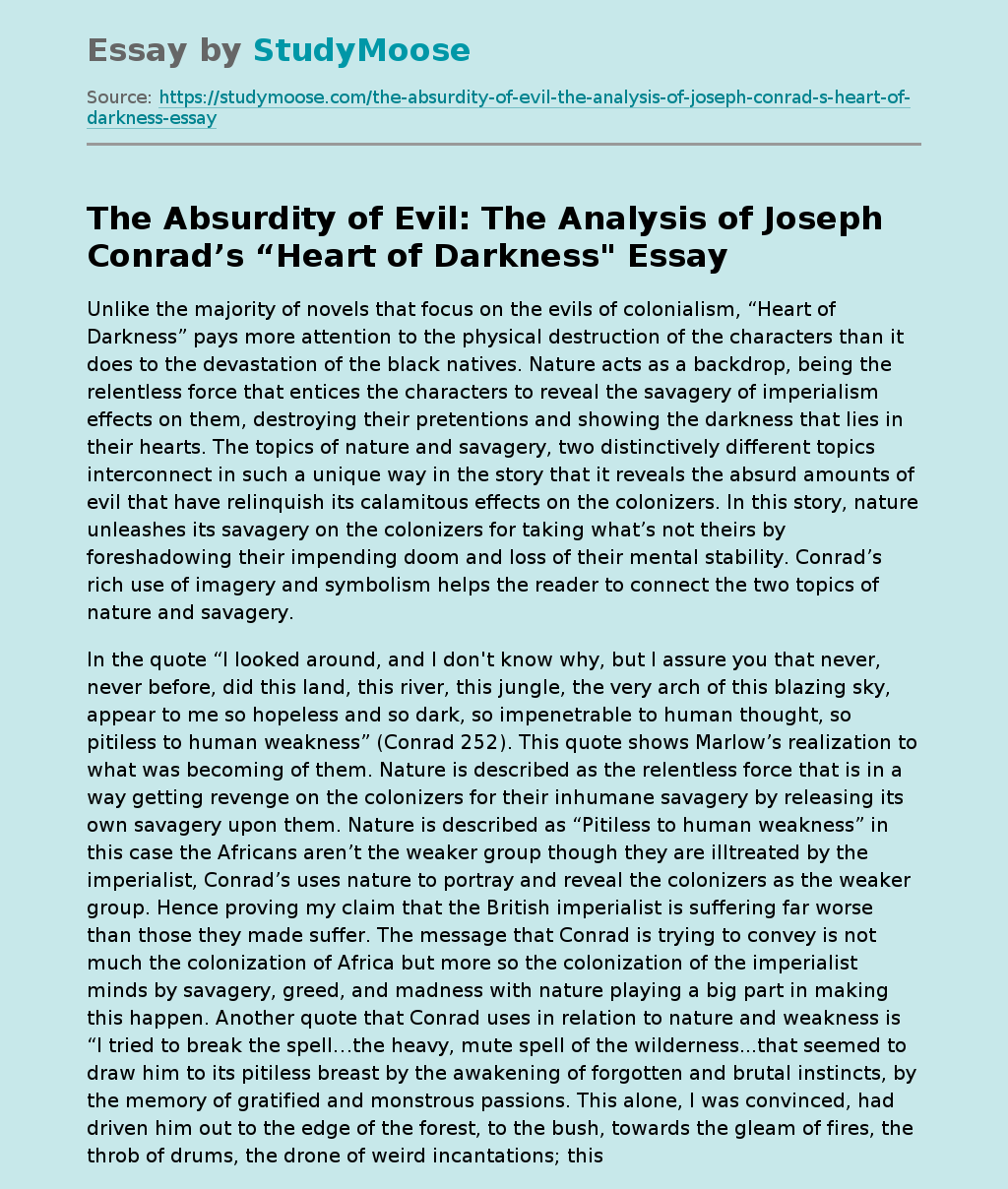