A tragic hero is someone of superior qualities and status, who suffers a reversal of fortune due to major character flaws. In the novel, Things Fall Apart, Achebe portrays his own characterization of a tragic hero through Okonkwo, the main character. Like typical tragic heroes in other literature, he suffers a terrible death in the end. Despite his honorable and respectable social status, Okonkwo’s tragic flaws, fear of failure and anger, bring about his own destruction.

Okonkwo is one of the most powerful men in the Igbo tribe: “Okonkwo was well known throughout the nine villages and even beyond…he had brought honour to his village by throwing the Cat” (3).

This suggests that in his society, power is attained by achieving greatness and fame, either through fighting or wrestling. Okonkwo also works and tends to his crops in a zealous fashion, which drives everyone around him to be as diligent as him. Because of this, he earns his place as one of Umuofia’s most respectable leaders.

Proficient in: Fear Of Failure

Though he isn’t always please with his children and wives, they bring him a sense of pride and respect since having a large family means that the head of the family is able to support all of them. Okonkwo fails to free himself from his major character flaws, which ultimately brings about his tragic demise.

Okonkwo’s first prominent flaw is his fear of failure, which is greatly influenced by his father, Unoka, a very lazy and carefree man. He had a reputation of being “poor and his wife and children had barely enough to eat…he was a loafer” (4).

Ashamed of his incapable father, Okonkwo felt that anything that resembled Unoka or anything that his father enjoyed was weak and unnecessary. Because of his fear to be seen as weak, Okonkwo even strikes down a child that calls him father: “…Okonkwo drew his matchet and cut [Ikemefuna] down. He was afraid of being thought weak” (43). Killing the child demonstrates Okonkwo’s fear of weakness and that to him, reputation is more important than the life of the child. This flaw eventually brings about his downfall at the end when he continues to fight stubbornly against the white Christians since he believes giving up shows weakness.

Okonkwo’s uncontrollable anger is another flaw that prevents him from true greatness and ultimately destroys his life. To discipline Nwoye, he becomes very rough on his son. For example, when Nwoye overhears that Ikemefuna was to be “taken home the next day, [Nwoye] burst into hears, whereupon his father beat him heavily” (40). Okonkwo’s inability to control his infuriation eventually drives his son away to join the “enemies” and even reject his own family. This particular attitude causes much hatred in Okonkwo towards the missionaries to the point of him murdering one: “Okonkwo’s matchet descended twice and the man’s head lay beside his uniformed body” (144). His abhorrence and rage in this situation led him to his downfall. Although his emotion can be justified, it is clear that he cannot control his sudden rage and his quick-tempered actions.

Okonkwo’s suicide at the end of the novel concludes the life of a tragic hero. His fear of failure and sudden anger lead him to such actions that cannot be ameliorated and reversed. Despite his several honourable characteristics and his high status in the Igbo society, he fails to correct his tragic flaws and eventually suffers a terrible downfall. 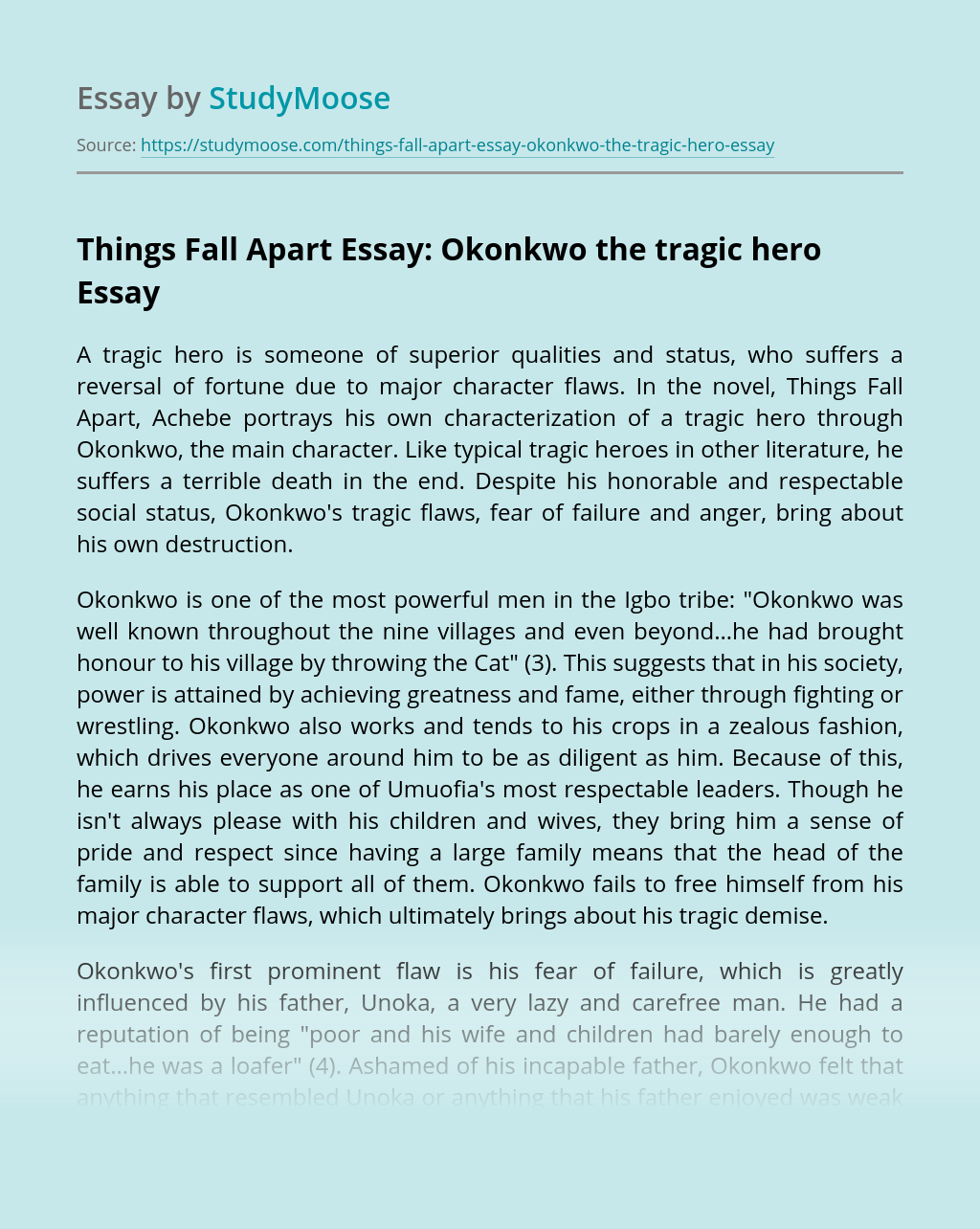