In _Things Fall Apart_ by Chinua Achebe, Okonkwo has always feared the fate that plagued his father. Luckily for Okonkwo, he has the determination and will to overcome the foreseeable future that his father has laid before him. This novel tells the story of a character that is intertwined with intrinsic uncertainties which ultimately leads to the downfall of a once beloved clansman.

Okonkwo has asserted himself in the Umuofia society making him a highly respected figure at a young age.

Turn in your highest-quality paper
Get a qualified writer to help you with
“ Things Fall Apart: The Downfall of Okonkwo ”
Get high-quality paper
NEW! AI matching with writer

Okonkwo is described as a strong and powerful man whose success is purely independent and on his own merit. Achebe writes, “And so although Okonkwo was still young, he was already one of the greatest men of his time. Age was respected among his people, but achievement was revered”. Because of his hard work and dedication to helping his tribe prosper, the elders of the society hold him in high regard. The “achievement” that Achebe refers to is mostly attributed to his overtaking of the great fighter, Amalinze the cat.

When Okonkwo was only eighteen he took down the champion wrestler, which immediately declared his dominance with the other tribe members. Although Okonkwo’s outwardly strong appearance, he struggles with the fact that his father was an improvident beggar. He categorizes his father as feminine, which in a patriarchal society is demoralizing. This explains how Okonkwo’s psyche and state of mind drives him to overcome his father’s reputation and start a new one of his own.

Okonkwo’s desire of wanting to squash his father’s incompetence can be seen as a positive or a negative, while it is the main reason for his successes, it also could be blamed for pushing him over the edge of sanity.

At the climax of the novel, Okonkwo’s fate seems to take a turn for the worse. First off his anger has been building up and one-day Okonkwo’s wife decides to braids her hair instead of cooking diner. This enrages Okonkwo because to him this is an example of his wife Ojiugo, putting her own desires before the mandatory tasks of being a wife and preparing dinner. This occurs one night during the Umuofia clan’s peace week. That night Okonkwo violates peace week and beats Ojiugo. This is a punishable crime and Okonkwo is sentenced to make a ritual sacrifice.

However after he commits this offense Okonkwo’s future suddenly changes from a guaranteed success to an uncertainty in the balance. At Ezeudu’s funeral Okonkwo participates in a gun salute. However Okonkwo’s gun goes off and unexpectedly and punctures Ezeudu’s son’s heart and kills him. Achebe writes, “Violent deaths were frequent but nothing like this had ever occurred”. With such an unlucky and unfortunate occurrence it is obvious that Okonkwo’s good furtune has run out. Achebe is right; this is a “violent” act, pertaining both to the boy and to Okonkwo. As it indeed ends the boy’s life, it also ends the life for Okonkwo as he knows it. He is sentenced to seven years banishment from Umuofia, and will have to restart his life in a new place and try to resurrect the respectable name that he once had.

Okonkwo is a man of action but also an avid up keeper of the Igbo culture. Okonkwo spends his seven-year exile in his mother’s tribe of Mbanta. Upon return back to his old clan of Umuofia, Okonkwo realizes that the whole society has changed and the tribe has been overtaken by missionaries from Europe, converting the people of Umuofia to Christiantity. At first it seems that Okonkwo is at his most passive state, as he is unable to stop the missionaries. However, not long after Okonkwo has seen enough and his aggression begins to control him again. Okonkwo decides to retaliate against the church and kills one the Christian missionaries. “Okonkwo’s matchet descended twice and the man’s head lay beside his uniformed body”. This is essentially Okonkwo’s last straw. There is no return for him now. He has been suffocated and killed by his destiny, too much has gone wrong and during his return to Umuofia he finds himself unnecessary and outdated.

Overall Okonkwo had the determination to overcome his pre-determined destiny, but in the end he could not escape his fathers deathly fate. Okonkwo ends up dying similarly to his father. Both he and his father die in disrespectful fashion to the earth. Okonkwo commits the most mortal sin of Umuofia culture and takes his own life. The downfall of Okonkwo was unavoidable from the beginning. This shows how even the strongest outward appearances can be used to cover up internal flaws. 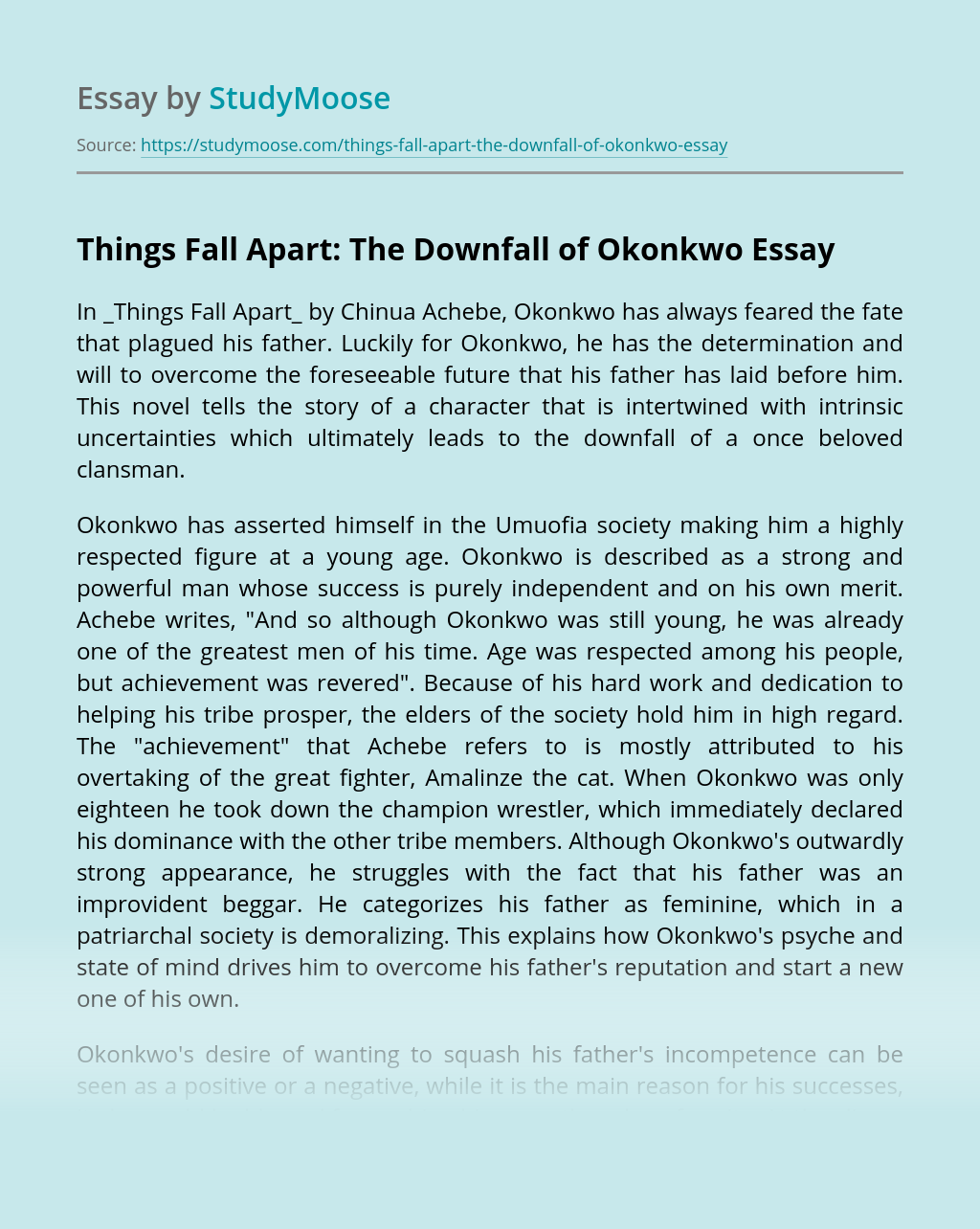 Turn in your highest-quality paper
Get a qualified writer to help you with
“ Things Fall Apart: The Downfall of Okonkwo ”
Get high-quality paper
Helping students since 2015
Stay Safe, Stay Original