Between the years 100 CE and 600 CE the Romans were experiencing plenty of changes within the empire. They experienced the overall collapse of their empire, and Christianity gained a foothold in their culture. In addition to these changes however, the empire experienced many continuities of Roman traditions thanks to the Byzantine Empire that came after its decline.

The most substantial change that the empire underwent in the late classical era was its decline and eventual collapse. Around 100 CE, the empire was experiencing a period of peace and prosperity or in other words, their golden age.

Don't use plagiarized sources. Get your custom essay on
“ History of Roman Empire During 100-600 CE ”
Get custom paper
NEW! smart matching with writer

The territory seemed to be always expanding, trade was thriving, artistic creativity was at its peak, and the economy was booming. A short time after that, the golden age ended due to bad leadership and invasions from outside invaders. The weak emperors and leaders could not properly address the new problems arising in the empire and Rome’s ability to prosper declined sharply.

Since the empire was no longer prospering, the government could not draw as much from the tax revenues putting more pressure on the administration.

Lastly, Germanic mercenaries were needed more and more to fight in the Roman army due to the population decreasing and they needed to be paid with additional money from the already declining tax revenues. The scene in Rome near the very end of the classical period was a sharp contrast to what people were seeing before the beginning of the decline during the golden age of the Roman Empire. In fact, the years between 100 and 600 were not good to large empires as a whole considering the fact that Han China and Gupta India also experienced their declines and falls during this time.

The growing influence of Christianity was also a major change that took place between 100 and 600 CE. Around the year 100, the citizens of the Roman Empire were still practicing the ancient Greek mythology that had been taught to them for centuries. However, Christianity’s emphasis on leading a simple life and the ability for anyone to gain passage into Heaven definitely appealed to the peasantry class in Rome because they did not have much to offer to any gods as sacrifice. Christianity continued to have a relatively small following until Emperor Constantine converted to Christianity and spread the religion very rapidly.

People were getting away from the polytheistic mythological religion they had previously known and were largely converting to monotheistic Christianity. In contrast to virtually everything else in the empire, Christianity actually gained strength during the fall of the Roman Empire because it gave people something to fall back and rely on in a time of struggle. This strengthening during a time of turmoil was also seen during the decline of the Han dynasty in China when Buddhism gained followers and influence.

The most apparent continuity one can see in the Roman Empire from the year 100-600 is the continuity of Roman traditions even after the empire’s fall. The Byzantines were the largest advocates of carrying on the traditions of the empire that came before them, especially the Byzantine Emperor Justinian. Justinian used many Roman legal codes in his administration, and kept the commercial center of the region at Byzantium both like the empire he succeeded. He even made an attempt to recapture much of the land that was lost after the fall of the Roman Empire, meaning Justinian even wanted to continue occupying the same land as the many emperors before him had. The continuance of traditions after the fall of the Roman Empire is not unlike that of Indian culture after the Gupta Empire in the same time period.

Even though there were many changes that took place in the Roman society between 100 and 600 (some good like the emergence of Christianity, and some bad like the overall fall of the empire), ultimately there was a great continuity in the carrying on of Roman traditions by the Byzantine Empire. 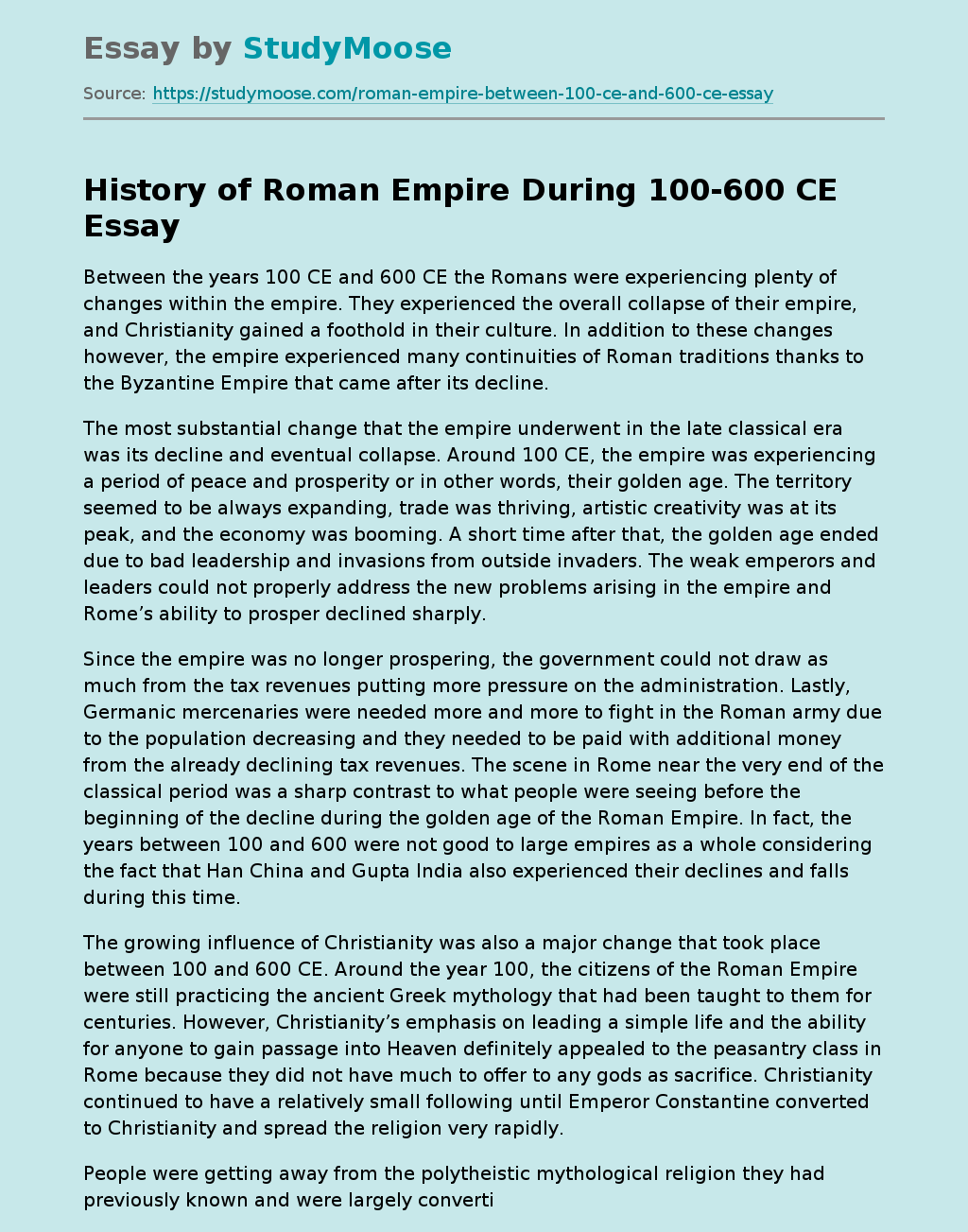