Compare and Contrast: Byzantine Empire and the Aztecs

The early civilizations of the byzantine and Aztec empires rose to power using a variety of tactics. They were both very successful and very powerful up to a certain point. The byzantine and Aztec empires both used military strategies and advancements in war. Although while the Byzantine Empire used Christianity to unify its people, the Aztecs made people fear them by using human sacrifices. Also the byzantine was a bureaucracy with an emperor who was thought of to be chosen by the gods to rule over the people, however, the Aztecs had a ruler who was seen as an actual god.

Don't use plagiarized sources. Get your custom essay on
“ Compare and Contrast: Byzantine Empire and the Aztecs ”
Get custom paper
NEW! smart matching with writer

The Byzantine and Aztec empires had very strong military tactics which led to expansion and advancement. The Byzantine conquered almost all of the land around it and had many skilled warriors. This is much like the Aztecs who had skilled warriors and even though they didn’t necessarily conquer the land, they took control of the people and made them pay tribute.

The Aztecs captured people for human sacrifices many times and this was an adapted technique they used, while the Byzantine used the technique of the “Greek fire” which was an invention similar to a flamethrower.

In the Byzantine Empire there was a main religion and in the Aztec empire hey were highly reliant on human sacrifice to scare people into joining the civilization. The Byzantine empire used the newly found religion of Christianity to unify its population and make them a whole. The Aztecs however, believed in multiple gods and used human sacrifices to make other people fear and respect them.

This tactic was also used to get them to join and scared them into paying tribute to the Aztecs or the Aztec gods.

There was an emperor in the Byzantine Empire who had much influence because people thought he had been chosen by god; this was similar but not exactly the same as the Aztecs who had a leader that was thought of as an actual deity, or god. Because the Byzantine ruler was thought to be chosen by god, he had power and control over his own civilization and also those that he tried to conquer. The Aztec leader had divine power over his people and since everyone viewed him as a god it would be wrong to defy him. For this reason, he had influence and power over other places, as well as his own.

Compare and Contrast: Byzantine Empire and the Aztecs. (2016, Dec 07). Retrieved from https://studymoose.com/compare-and-contrast-byzantine-empire-and-the-aztecs-essay 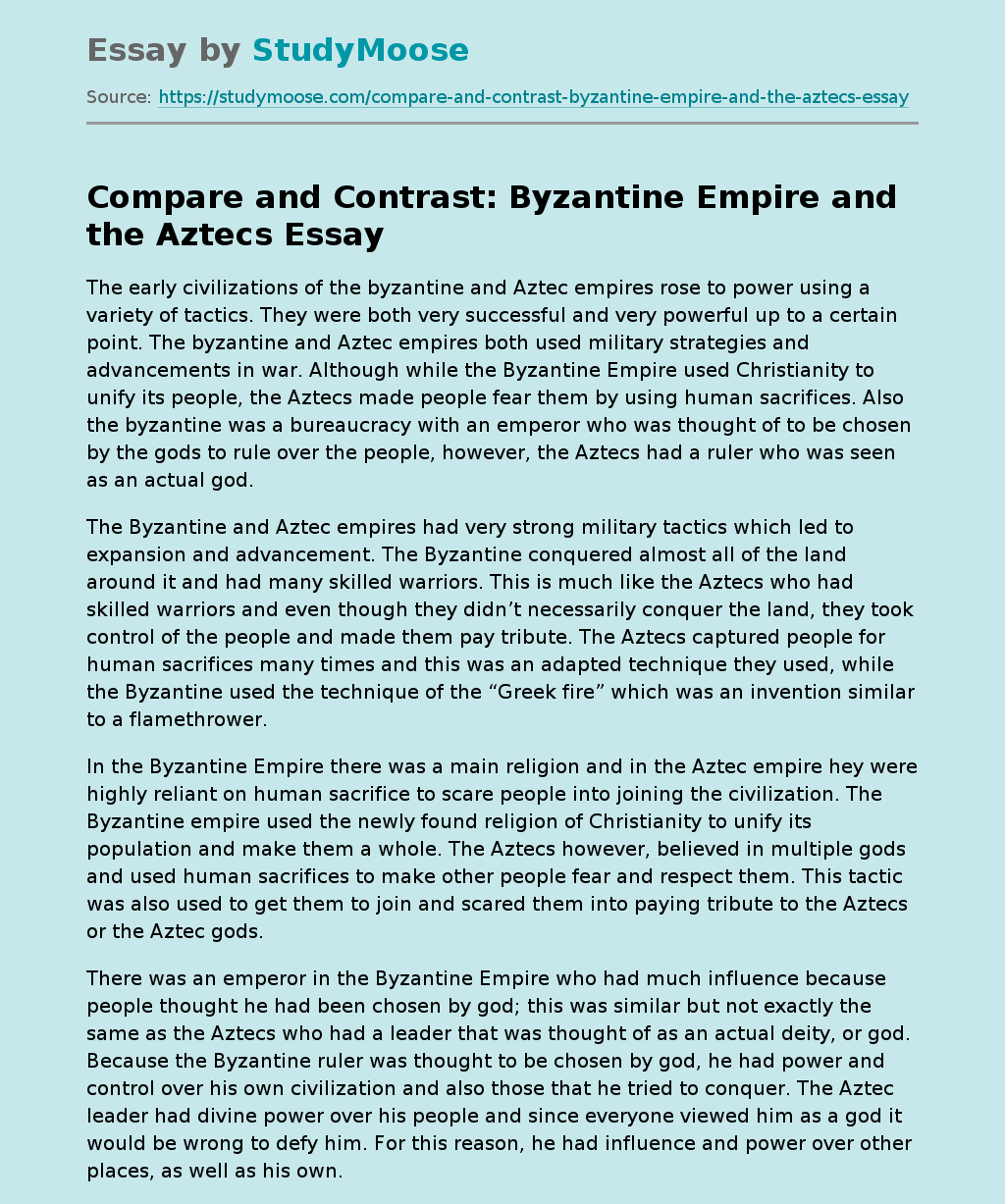