The Mongols and Aztecs lived on completely different sides of the world. Although they had extreme differentials on Longitude and Latitude, the similarities between the two societies are compelling. The Mongols and the Aztecs were similar politically and socially. Politically, their Militaries were large and powerful; socially, women also had more rights and power. However, they were not the same in every category. Religiously, they were very different. Along with that, the foundation of their societies are very different as well, one being nomadic and one being agricultural based society.

Don't use plagiarized sources. Get your custom essay on
“ Mongols and Aztecs Comparison ”
Get custom paper
NEW! smart matching with writer

Politically, the Aztecs and the Mongols were fairly similar, particularly with their military. The Aztecs had a very large and strong military. Most of their society was based around the foundations of their military. The Mongol society was also very strongly based around there military. Every boy was trained to be a soldier as soon as he turned 14 in the Mongolian Empire while in the Aztec Empire, every able bodied boy was trained to fight.

Although the Aztecs did not have a professional army, every man knew how to fight and would fight at a moment’s notice.

This militaristic way of life in both societies made them both very strong empires. Another similarity is their intelligence in warfare. The Aztecs wore costumes to make there already feared army even more feared among the tribes around them. The Mongols did something very similar. To scare there enemy the Mongols would put fake soldiers on horses to make their numbers look larger than it actually was.

Socially, the two societies were very similar when it came to women’s rights.

Aztec women although were not equal to the stature of men, were actually quite liberated. Women in both societies had a much higher status in society then in most other societies of the time period. Mongol women, unlike nearly all other Asian societies, were actually taught how to fight in case of an attack. This shows that women in the Mongol Empire were seen closer to as equals than anything else. Although women’s jobs did differ from men’s jobs, they were very balanced in difficulty. Aztec women were close to being equals as well.

Although Aztec women could not fight, they could own property, get divorced, and remarry. Owning property was a very rare trait for women of this era. Religiously, the two societies were very different. The Aztecs had hundreds of gods and goddesses although they praised their sun god, Huitzilopochtli, more than any other god. They Aztecs would sacrifice people (usually prisoners of war) to help give the sun energy to sustain its life. Many of the gods that the Aztecs worshipped were gods of agriculture because of how deeply their society relied on agriculture.

The Mongols did not have as many gods as the Aztecs. The Mongols were very open with religion; they were much more tolerant than the Aztecs. Although when the Mongolian great leader, Genghis Khan, opened his mind to Shamanism, the rest of the Mongol society followed him although it was never mandatory to be Shamanistic. Perhaps one of the biggest differences between these two societies is that the Mongols strongly believed in being a nomadic society, while the Aztecs strongly relied on their agriculture.

One of the reasons the Mongols were so good at war is because they incorporated strategies they used in war in everyday life. For example, they used horses every day in their life because of them being a nomadic society. So, when it became time to use horses in war, they were very well ready for it. This was very different for Aztecs. The Aztecs taught war in schools. It was not incorporated in everyday life. Although all of the other tribes around the Aztecs were agricultural societies too, therefore being like this was not a disadvantage for them.

In conclusion, the Aztec and Mongolian societies were in fact, not as different as they seem, even though they were thousands of miles away. They were similar in the fact that they were both militaristic societies and gave more freedom to women than most other empires of their time periods. However they were different in the fact that one was nomadic and the other was agricultural based. Their religious beliefs were also very different as well. 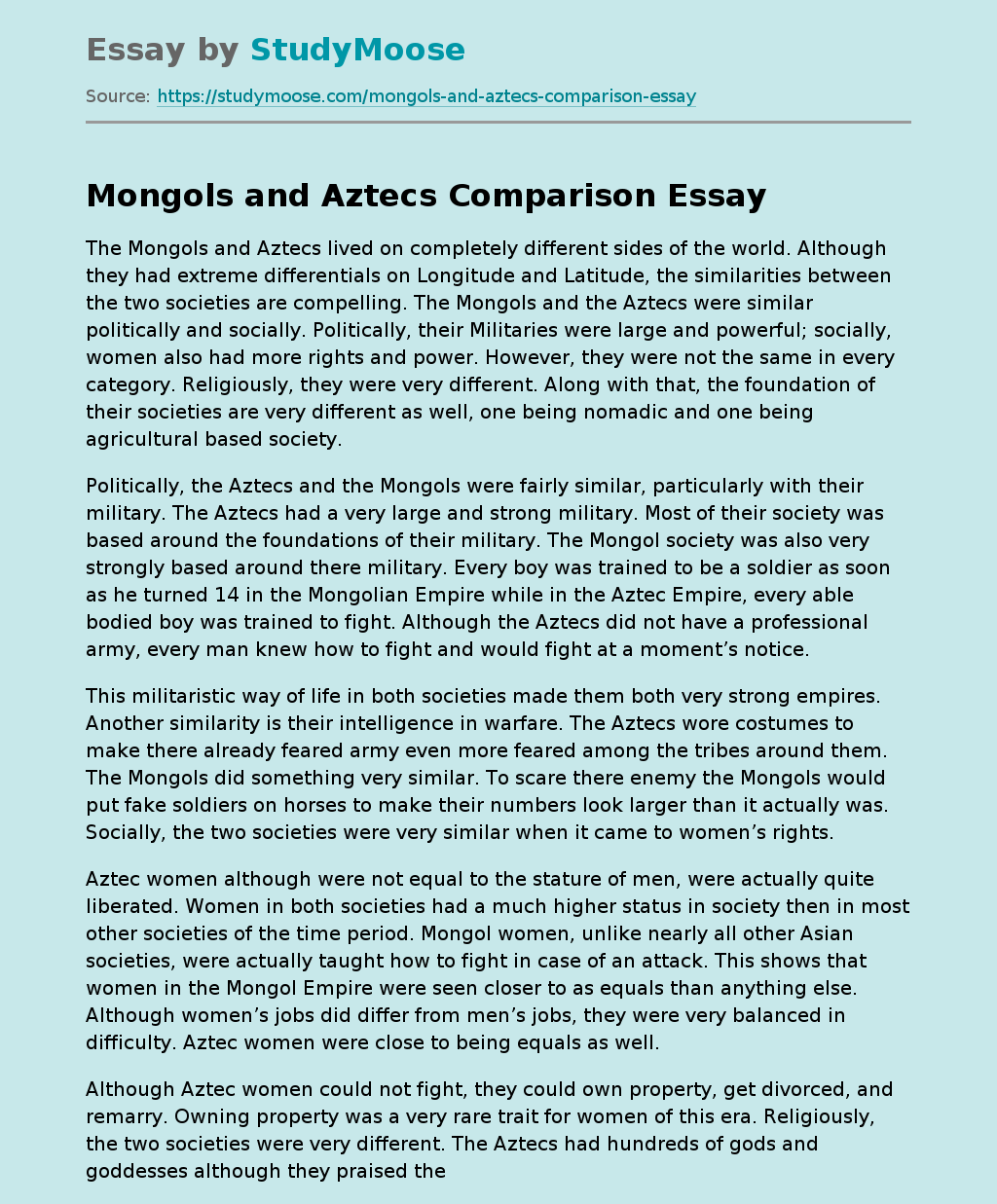