The Mayans, The Aztecs, And The Incas Civilizations

From 250 A.D. to the late 1500’s A.D., three advanced civilizations, the Mayans, the Aztecs, and the Incas controlled Central America and South America. Each of them was different but all shared some of the same qualities. They all were civilizations that had a daily life than revolved around religion. Their religions also required a lot of human sacrifices to please the gods. Also, they all invented calendars that were surprisingly accurate compared to the calendars today.

Don't use plagiarized sources.
Get Your Custom Essay on The Mayans, The Aztecs, And The Incas Civilizations Just from $13,9/Page

One of the calendars was less than a minute from being exact. Finally, they all declined for many different reasons but the Spanish conquistadors was one of the most common and deadliest, due to their advanced weapons and the diseases they brought. But even thought they all had mysterious declines, these ancient civilizations of Latin America were very advanced and had many great achievements.

The earliest Latin American civilization was the empire of the Mayans. They controlled most of the Yucatan peninsula and part of southern Mexico.

The Mayans were known for their advanced math skills. They invented the number zero and developed a sophisticated counting system; the Incas also had an advanced counting system like the Mayans. Mayans communicated through the use of hieroglyphics. They had over 800 symbols that represented things like words, syllables, days, and numbers. The Mayans were also well known for their new type of farming.

They called it slash and burn farming in which they cut down all the trees in an area, then they lit the area on fire, so that the ashes from the trees would enrich the soil and make it better to grow in. the decline of the Mayan empire is a mystery still to this day. The most popular theories are that the soil became infertile, so they ran out of food. Another theory was that they just got up and left and walked into the jungles. The only other possible theory is because of constant warfare between the Mayan city-states.

After the fall of the Mayan empire, the great civilization of the Aztecs came into power. The Aztecs centered themselves on Lake Texcoco, in the city of Tenochtitlan. The capital city of the Aztecs was built in the center of Lake Texcoco, with large causeways, which were large sturdy bridges, connecting the city to the mainland. The Aztecs advanced engineering allowed them to adapt to their environment just as the Mayans and Incas did. The written language of the Aztecs was a combination of hieroglyphics and pictorial symbols. Like the Mayans, the Aztecs language was used for counting, which was more primitive in Aztec culture, days, records, and communication. The Aztecs expanded their empire through military strength.

They conquered the nearby city-states, and forced them to pay tribute or face destruction. But later needed for sacrificial subjects led to less aggressive and less deadly military tactics, causing the strength of the Aztec army to diminish. Around the late 1400’s into the 1500’s, the power and vastness of the Aztecs began to fade. The once calm and under control city-states began to rebel, leading to less human sacrifice and less resources being collected. Also, the conquistadors came from Spain, brining along with them deadly diseases like smallpox, and far superior steel weapons, along with a lust for gold. They soon conquered and destroyed the Aztec empire with almost no effort at all.

The Incas, down in the Andes Mountains, never came into contact with the Central American civilizations. They never borrowed any customs or traditions, yet their civilization was fairly similar. They had very advanced engineering skills, which led them to the building of extensive road systems. They also began the idea of terrace farming in which you carve out steps into a hill and farm on the man-made steps. Even though the Incas had no written language, they passed everything down through oral communications. But they did have a complicated counting system in which different sized beads and colored ropes were used to counts things such as military, crops, population, and many other things.

The Incas, as did the other Latin empires, had invented a calendar that had 365 days and was kept accurate by looking at the position of the stars, the moon, the planets, and the sun. Due to the complex road system the Incas built, they had to devise a simple messenger system to communicate throughout the empire. Runners would have to travel over twenty-five miles a day to run a message to another runner, then the first runner would have to pass off the message to the second runner and then the first runner would rest. It works somewhat like a relay race only it isn’t a competition. In the late 1500’s civil war began to break out between the sons of the emperor after he had died. The empire then split into two halves, but it never became whole again and just slowly began to crumble until it was gone.

In conclusion, these three civilizations were the most sophisticated in all of the Americas at the time. The Mayans were excellent astronomers and mathematicians, the Aztecs were experienced warriors, and the Incas were skilled engineers. Even though all of the empires had different strengths, they all had some similar qualities. They all built stone buildings, with the Mayans and Aztecs and their well-built pyramids, and they all were polytheistic cultures that practiced sacrifices daily. All of these sacrifices led to a large loss in resources both human and natural. The Aztecs alone would sacrifice a quarter of a million people a year. They all used gold and melted it and made figurines to give to the gods. Soon their empires fell apart and the people of the empire just walked away.

The Mayans, The Aztecs, And The Incas Civilizations. (2016, Jul 09). Retrieved from https://studymoose.com/the-mayans-the-aztecs-and-the-incas-civilizations-essay 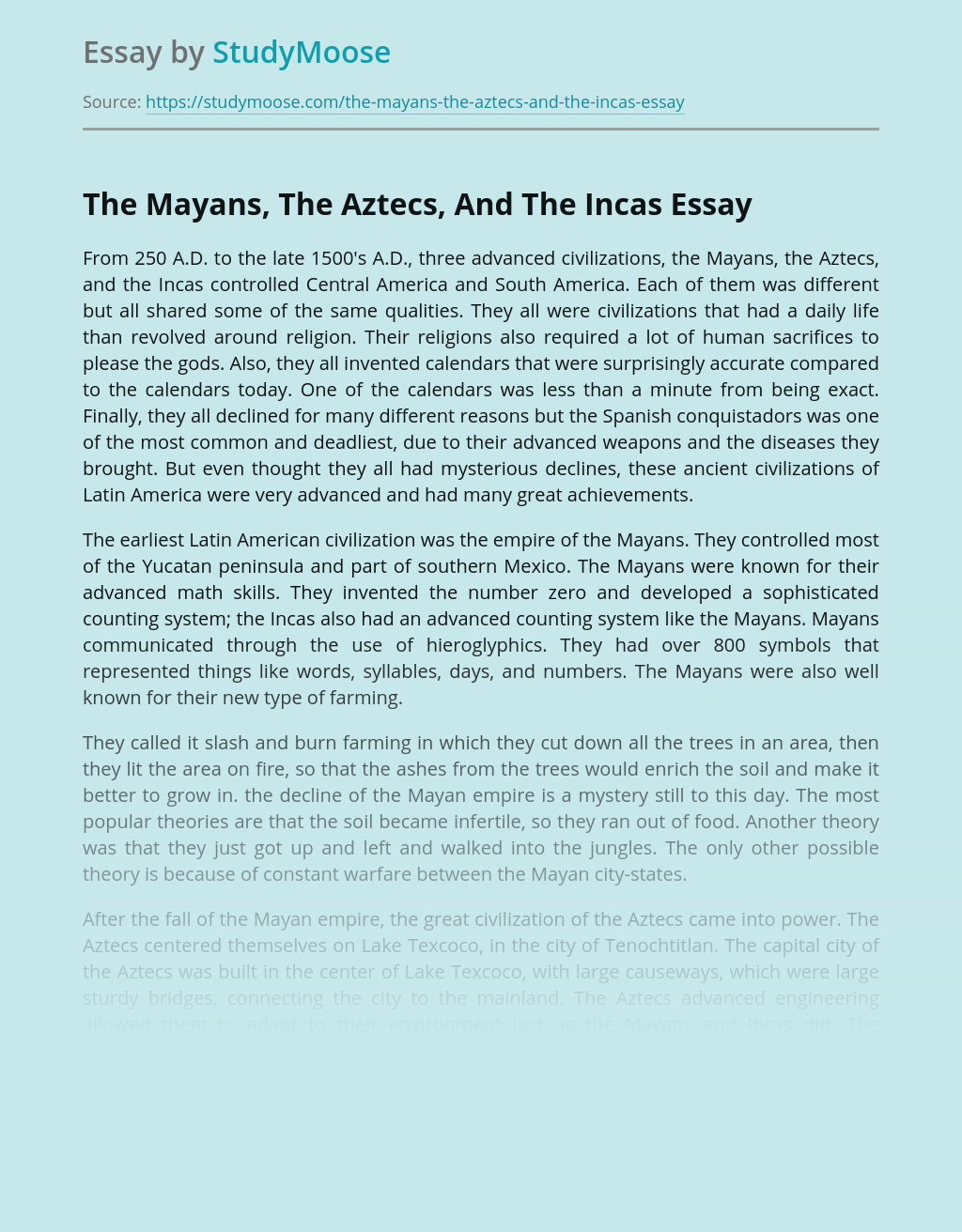 Rate this post Most societies that developed in ancient civilizations were centered around some form of imperial administration and Imperial Rome (31 B.C.E.-476 C.E.) and Han China (206 B.C.E.-220 C.E.) were no different in this sense. Both civilizations had a network of cities and roads, with similar technologies that catalyzed cultural amalgamation and upgraded the...

Get Essay
Were Vikings Barbarians or Representatives of a Civilization

Rate this post Were the vikings barbarians? First of all, we must decide what a barbarian is. A barbarian is a foreigner who is without culture, education nor manners. Somebody who is savage, uncivilized, crude and who acts like an animal would. But it is all a point of view, to today’s standards eating human...

Rate this post The object is an illustration present in a rectangle paper. The paper itself is glossy, thin and fine meshed. In the object, the words “SUPERMAN” can be found illustrated at the top of the paper in a block, all caps font, colored yellow with red lining. Below it and slightly to the...

Rate this post Society comes from the French word “société” and the Latin word “societas” which mean fellowship and companionship respectively. Other popular definitions of society are; a group of people living together because of their same interests and ways of living. All countries of the world have their own set of societies that varies...

Rate this post The elites in all three civilizations actively pursued the Chinese way of life. In both Japan and Korea, almost all traits of Chinese culture and political organization had to be modified to fit the ancient traditions of these societies, while the Vietnamese mainly learned from the Chinese’s military organization. The Korean elite...

Rate this post It can be argued that if Europeans did not discover America, but instead discovered the ocean, it had a great impact. The discovery of the ocean certainly led to the discovery of new lands. The 15th Century was certainly a great time for European exploration. The location of European countries played a...

Rate this post Lucio V Mansilla’s Una excursión a los indios ranqueles is a 19th century literary piece describing different societies and cultures in Argentina, mainly focusing on the Indios ranqueles and the Gauchos. In this piece, Mansilla describes the people he meets and the customs these people have, and whether he understands or approves...