In a growing technological society, the demand for Intel Corporation’s products is rising at a rapid pace. Intel must open a new plant at a rate of one every nine months to supply this demand. In order to diversify assets and decrease risk, Intel must invest in a new area. This area must consist of a stable and transparent government, an export-based economy, a well-educated population, a non-union mentality and lower operating costs than the United States.

Intel aims to invest in Latin America because the area currently does not have any plants and accommodates all of the necessary criteria.

Turn in your highest-quality paper
Get a qualified writer to help you with
“ Intel’s Site Selection Decision in Latin America ”
Get high-quality paper
NEW! AI matching with writer

After selecting a continent, Intel was more concerned about availability of technical personnel and engineers to staff the plant; labor unions and labor relations; transportation infrastructure and costs; the availability and reliability of the electrical power supply; and the government’s corporate taxation rates and incentives. Therefore, the four countries in Latin America that were most appropriate are Costa Rica, Brazil, Chile and Mexico.

Costa Rica seemed like a valid alternative. The advantages to invest in Costa Rica include a reputation for stability and democratic government, a collaborative government willing to adapt and change laws in a transparent manner, relatively lower wages, rare and non-combative unions, strict strike laws, excellent transportation methods, and tax exemptions. Disadvantages are that the investment could overwhelm the small economy (pop. 3.5 million); finding enough people with the right training would be difficult; there are not enough daily flights from San Jose’s airport; and relatively high electricity costs.

Chile really impressed the Intel team upon initial inspection. Investing in Chile is beneficial due to the modern infrastructure and technical training programs. However, shortcomings include travel distance for expatriate executives; salaries for technically trained personnel are relatively high; engineer salaries were similar to those in the United States; absurd capital controls; site proposal far away from airport (Santiago); and no significant government incentives.

Mexico has been a great area of foreign direct investment by many high technology firms. Intel hoped it could join the Mexican Silicon Valley. The advantages to investing in Mexico are reliability (prominent Guadalajara area); sufficient travel flights and capacity; low labor costs; large supply of skilled engineers and technicians; lowest electrical power costs; and free land for plant’s site and subsidized training for an extended period. Weaknesses of this site include lack of governmental incentives at the federal level; a high rate of unionization; and exceptions would be made creating an unpredictable environment.

Given the advantages and disadvantages of each country, Intel should invest in Costa Rica. Costa Rica should be selected due to its export-oriented infrastructure, reliable power and advanced telecommunications, as well as its talented and educated workforce, highly educated population and supportive business environment. If a president of a country is willing to personally take a group of Intel managers on a helicopter tour of Costa Rica, then this demonstrates the government’s willingness to collaborate with further details and issues that may arise. Intel was not too big an investor for Costa Rica.

The country desired a new competitive market to cater to and Intel provided a solid stepping stone in to a newly developed Costa Rican high technology industry. The vital factor was that for every disadvantage listed by the Intel team, the Costa Rican government had a non-preferential and transparent alternative to each one. The deciding factors for the other countries were: Brazil had insecure and unreliable taxation laws that had actually driven some states to the point of bankruptcy; Although Intel was a direct foreign investor, Chile’s capital control methods would prove unstable and questionable if they forced hidden costs on to similar portfolio capital investors; Mexico’s made a crucial mistake of granting exceptions for Intel – entailing an uncertain future if there was a change in government. 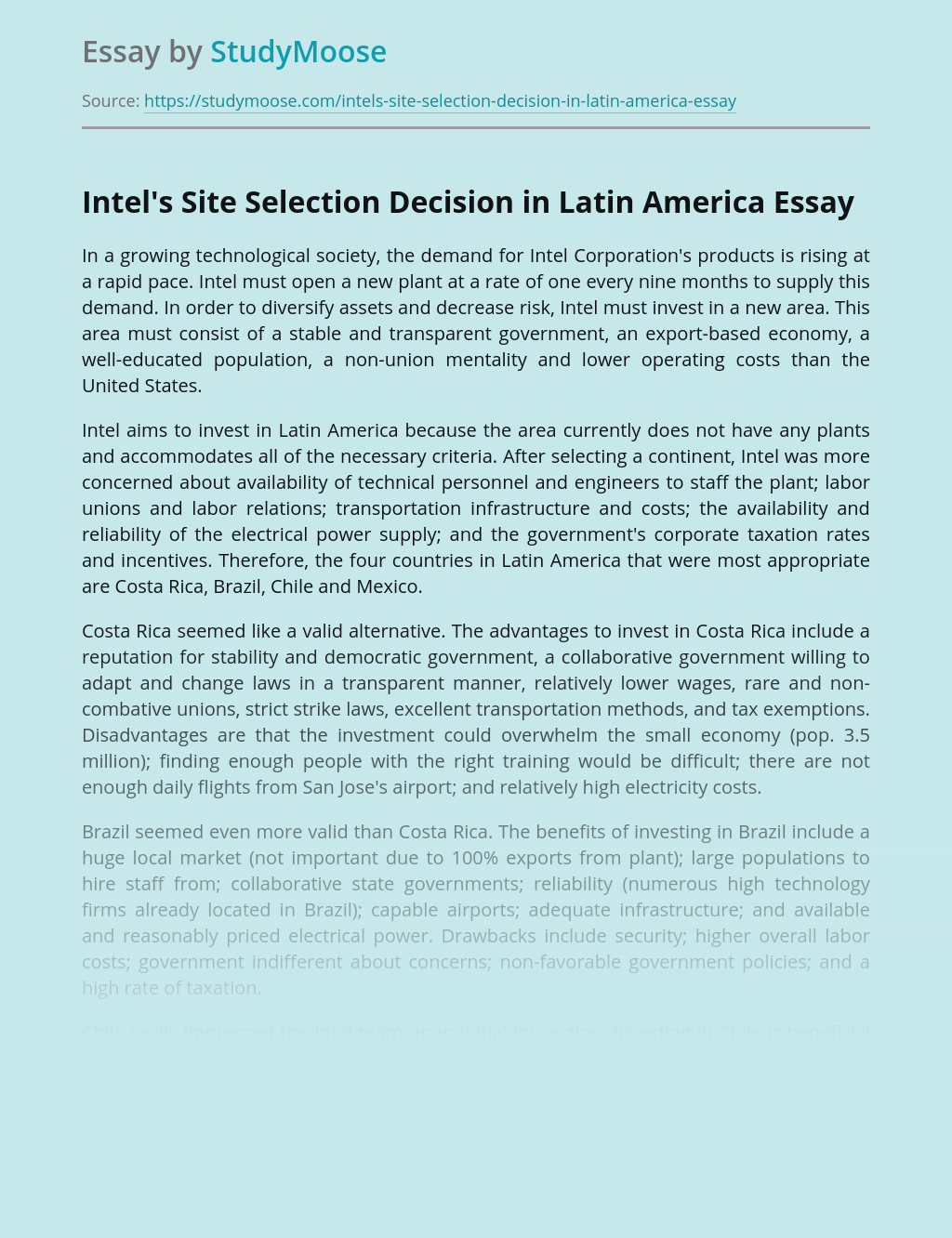 Turn in your highest-quality paper
Get a qualified writer to help you with
“ Intel’s Site Selection Decision in Latin America ”
Get high-quality paper
Helping students since 2015
Stay Safe, Stay Original