Intel vs AMD for Personal Computer

In an age where technology is constantly evolving and the demand for performance is increasing, the central processing unit (CPU), also known as the processor, is a main concern for many computer buyers. There are many considerations that take place when choosing a processor such as whether the computer will be used for storage or gaming, will the user be looking for performance in speed or graphics, and individual budget. Among all the different brands the two biggest companies considered competitors are Intel and AMD.

Don't use plagiarized sources.
Get Your Custom Essay on Intel vs AMD for Personal Computer Just from $13,9/Page

Even though each company may have an edge in certain areas, both companies continue to constantly make changes and improvements to their products in an attempt to remain competitive. The purpose of this comparative paper is to look at both companies to determine if one company’s processor is truly better than the other. Literature Review Performance and value are major considerations when deciding to purchase a new computer. Much of a computers performance is based on the central processing unit also known as the CPU or processor.

According to Fisher, “The CPU could be considered the “brains” of the computer…and is responsible for interpreting and executing most of the commands from the computer’s hardware and software. ” In today’s market the two leaders in CPU production are Intel and Advanced Micro Device, Inc (AMD). Depending on a person’s computing needs, one CPU might be better than the other when considering price, speed, and performance. Analyzing each companies product and comparing them will help use determine which processor is best for us. Our first consideration will be speed.

If speed is a big concern, which it is for many computer gamers, Intel has shown to be the better product. According to Singh, “Intel processors give you a higher clocking speed, which means they have a higher frequency of work done per second. ” Intel is designed different from AMD because it divides the total work into the smallest possible division and then goes through it in a high frequency. AMD goes through it process at a slower rate but processes more of its data per cycle. For this reason, one can not make the assumption that Intel is better simply because it is the faster processor.

In addition, AMD has recently made claims that there new Piledriver processor will present stiff competition for Intel’s latest Ivy Bridge processor. Another consideration is power consumption. In the past AMD use to be the clear winner, their release of the Athlon 64 surpassed the efficiency of Intel’s Pentium 4 processor. Since then, Intel has implemented new power management features and has focused on increasing efficiency. As a result, Intel has beat out AMD and currently has the most efficient processors available.

An added benefit to lower power consumption is that the processor dissipates less heat and stays cooler. AMD has been known for heating up faster under intense and heavy duty computing conditions. However, it is speculated that the new generation of AMD processors have taken care of the overheating issues. Gavrichenkov (2011) conducted a comparison of the power efficiency of AMD and Intel Processor and stated: Systems based on processors with integrated graphics cores become increasingly popular not only due to possible system miniaturization.

In most cases the users decide to go with them, for cost-cutting purposes. Processors like that help to save some cash not only by omitting the external graphics accelerator, but also by allowing to build a more energy-efficient system with total power consumption being lower than that of a system with discrete graphics. There is another bonus to it: quiet operation modes, because lower power consumption leads to lower heat dissipation and therefore the use of simpler cooling systems. (p. )

The next consideration is overall performance. Depending on your needs, performance can be interpreted in different ways. If you compare processors with the same rating side by side it is clear that Intel is the better performer. But, if you are a gamer you will discover that AMD is the better choice. AMD processors are much more compatible with ATI graphic cards. To many gamers graphics are everything and when looking for a processor to integrate with an ATI graphics card AMD is the best choice.

If you do not intend on using you computer for gaming and simply would like computing performance Intel is the better choice. Intel has the best multitasking abilities which according to Singh, “is the ability to divide work into smaller pieces for faster computing. ” The final and to some the most significant consideration is price. This is an area where AMD and Intel are clearly distinguished. Although performance statistics show the Intel is slightly better overall, AMD is priced 20% to 60% cheaper.

For gamers who are generally under the age of 30, this difference in price makes AMD the favorable processor. To those who have the money and are looking for performance Intel would be the better choice. According to Shulka (2012), “ (Intel) prices will be slightly on the higher side compared to AMD, but given the consistency, superior performance specs and its downward- traveling energy consumption curve. Intel many not have that much to worry about. ” It retrospective, it ultimately depends on what it is you plan on using your computer for.

Intel vs AMD for Personal Computer. (2016, Oct 08). Retrieved from https://studymoose.com/intel-vs-amd-for-personal-computer-essay 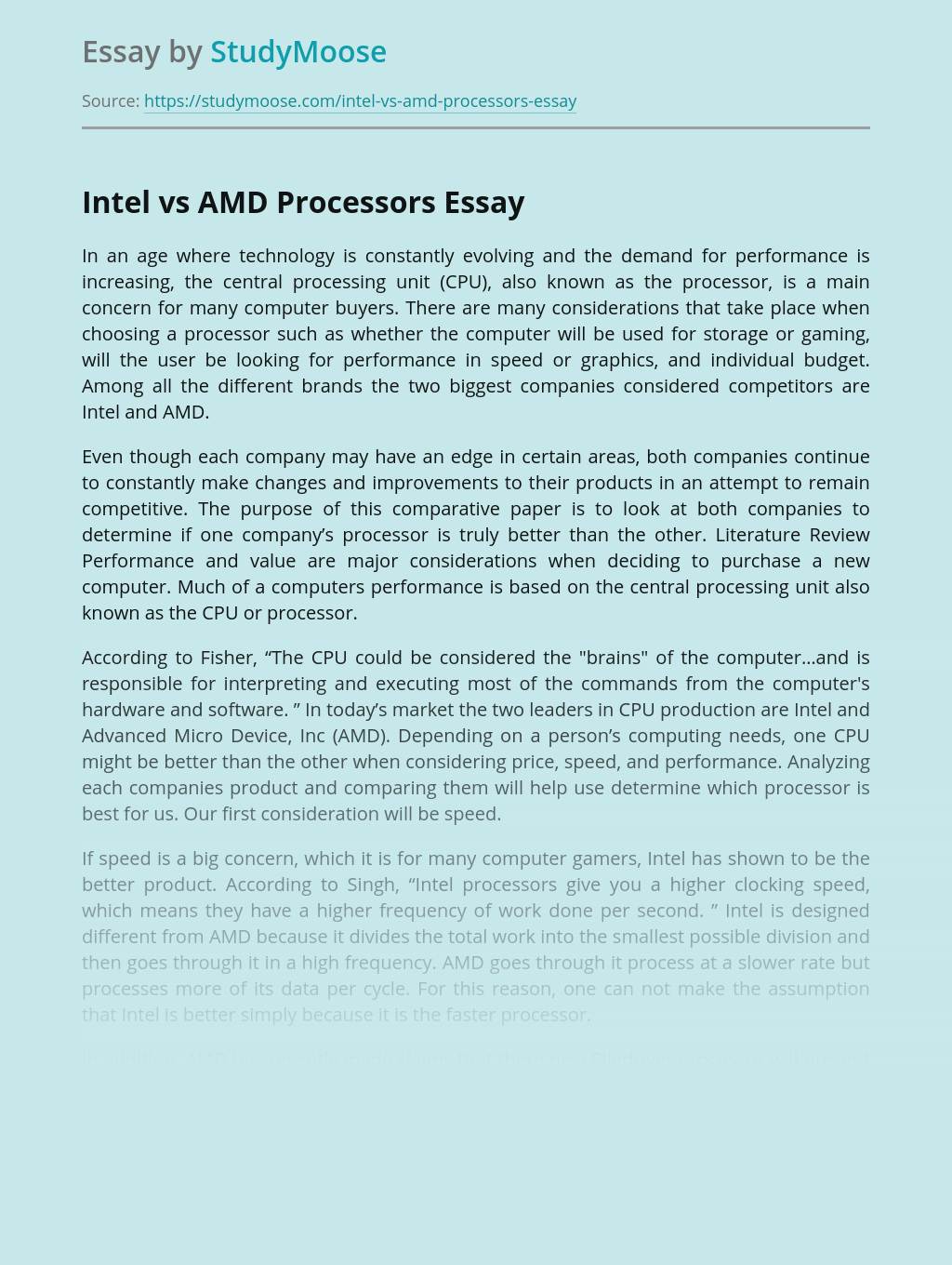 With the introduction of computers, conventional accounting systems and methods using papers, pens and abacuses have undergone drastic changes, therefore exerting a great impact on internal control and audit trails in following audit procedures. Also, the introduction of computer has brought an immense increase in the availability of electronic resources. My topic is entitled auditing...

The Computers Will Soon Replace The Book

The feeling of rough paper on your ? ngertips, the familiar smell of a book fresh out of print… Would you really wish for these to become mere memories, lost and worthless? Would you want to go to a library where there were no books, only an electronic catalogue to browse through for electronic text?...

General Questions – General Academic Questions CMGT/400 Week 5 Learning Team Kudler Fine Foods IT Security Report and Presentation Develop a 3,000- to 3,500-word report for the CIO of Kudler Fine Foods. · This report should cover the material from the previous weeks, providing a comprehensive look at the key safeguards needed for the project...

Computerize sales and inventory system Computers began from a wild imaginative idea to the world’s highly prioritized tool. Computers today are now used as a substitute to manual processes and other past inventions like the radio, television, etc. It is now used by people for much simpler, easier and faster way to do things. Some...

CHAPTER II REVIEW OF RELATED LITERATURE AND STUDY Foreign and Local Literature Foreign Literature According to Trip Adler, enrollment is the process of entering and verifying data of students to register on a particular school. Different interrelated processes build up enrollment procedures called Enrollment System (ES). ES are used particularly in recording and retrieving student...