Representative democracy is what we have in this country. We are seen by many other countries as one of the most well run countries in the world. Our system seems to run very well and there are many advantages of using the system we do. The principal is that the people are represented through their MP who is able to put the views of the constituent to parliament. On the other hand most politicians want to be successful. and this much easier if you follow the party line.

Don't use plagiarized sources. Get your custom essay on
“ Representative democracy ”
Get custom paper
NEW! smart matching with writer

The use of the whip system means that if there is a whip to the 1st degree then the Prime Minister expects you to vote the same way as him. If you do not, this may jeopardize your chances of getting up the opportunity ladder, as you are against the decision of the elected party leader.

Another advantage of representative democracy is that the elected MP for a specific area will be aware of the problems, things that could be improved and the views of the constituents in that town/s.

This means that peoples needs can be met to the highest level. A disadvantage to this would be that people may not get a chance to see their MP to express their beliefs so they may often feel like their views are unwanted and be annoyed with the government e.g. if someone sent a letter to their representing MP and did not get a response. Also, MP’s are spending more and more time in Westminster.

This means they are often away and this is why they may be out of touch with their constituents.

Some people believe along with the Conservative Party and Edmund Burke that the general public is not intelligent enough to make decisions for themselves, so we have a government made up of intellectually superior people to do it for us so we don’t get it wrong. But the majority of the people would argue that we are all equal and we should all have an equal say in all matters. After all, democracy is defined as “A form of government in which political power is exercised by the citizens”.

Another argument for Representative democracy is that it is very practical and quick. Some people think that other kinds of democracy are more efficient like direct democracy because the whole country would vote on every issue and it would be very democratic. This is not always the case e.g. in Switzerland they have direct democracy and in every referendum held in the past year, less than 50% of those eligible to vote did so. Also the government does not have to go with what the majority of the people decide so some people may say that it is pointless. Some people may say that representative democracy is not very democratic because of many reasons e.g. the whip system.

Representative democracy allows MP’s to look at all of the factors and elements that would be affected if a new policy was introduced and make an informed decision on which way to vote. This means it is reliable and there are lots of people trying to find a problem with the policy and either amend it, or vote against it. A major flaw with this is that even though the MP is supposed to represent the views of his/her constituents not all of the peoples views may not get back to the MP so they do not have all of the factors to consider.

This system where the people elect MP’s to vote in matters for them seems like a very fair system. However some people say that when examined closely the system demonstrates a range of flaws which can make it unfair and undemocratic. One of these is the fact that when a party is running for election, they bring out a manifesto. This is a small booklet of the main policies that that party wishes to bring in, and the main issues they wish to tackle. This sounds excellent, but the party does not have to feature policies they don’t want to on the manifesto. This means that a party could have policies that the public may not agree with and only bring them in after they have been elected.

Another problem with this system is how representative parliament actually is.. The term “representative” means the people are represented. This includes all people such as men, women, homosexuals and ethnic minorities. In the House of Lords and the House of Commons, this is not the case. The figures for women and ethnic minority population in the two houses are below.

These figures demonstrate that our representative system is not as democratic as it might first appear..

In conclusion, there are several advantages and disadvantages of Representative democracy, but I have looked over them many times and every time I have analyzed the figures, points and facts I found that the disadvantages outweigh the advantages so the system we use today may not be working at the level we would expect it to be run. Now the question that is asked should be is Representative Democracy the best political system for our country to use? 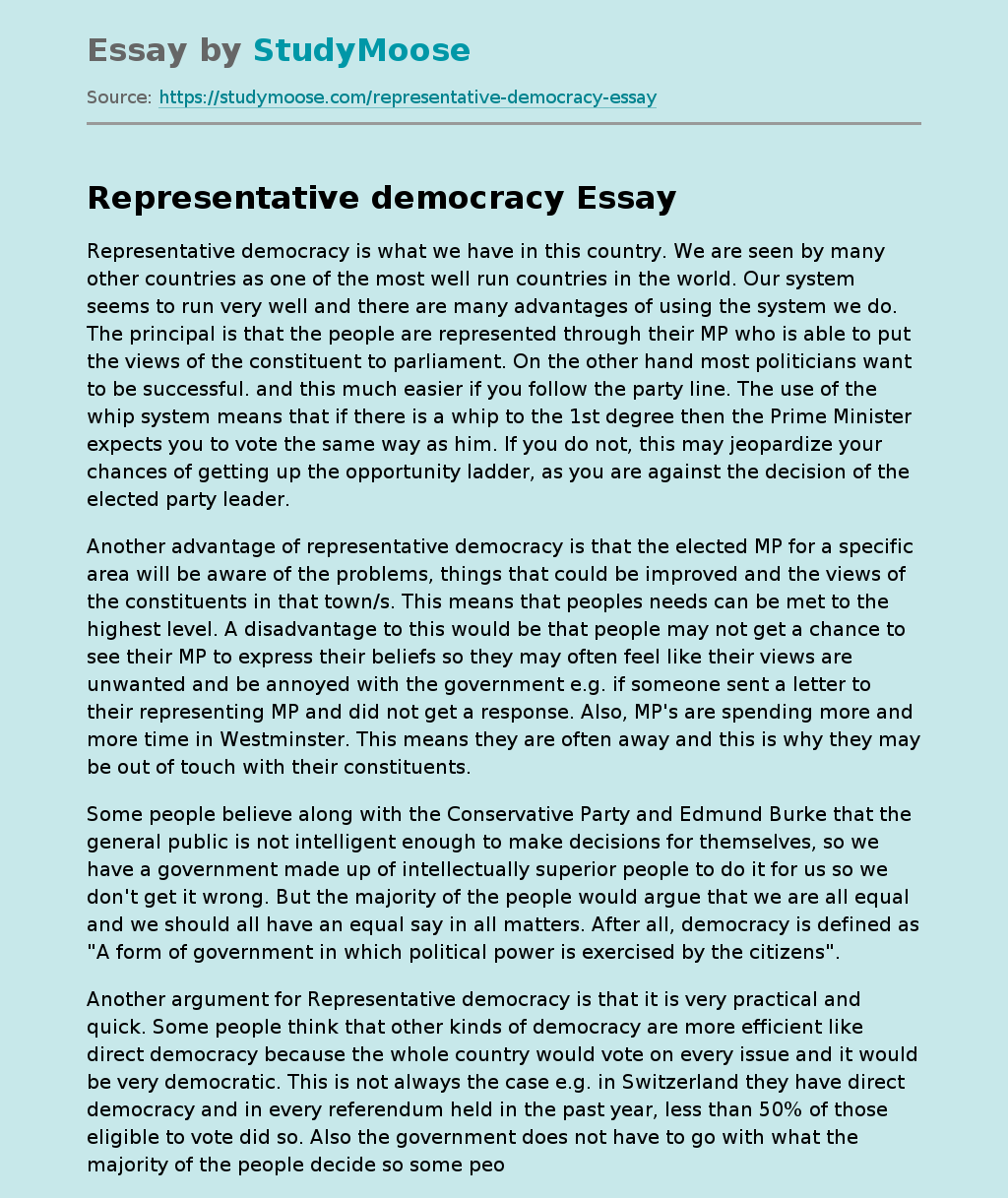