Throughout Shakespeare’s “Macbeth”, Lady Macbeth is consistently depicted as one of Shakespeare’s most evil and frightening female characters, however, she is only evil to the extent of lacking the judgement of her behaviour. Pure Evil can be defined as having only ‘inhumane’ qualities or constantly being morally depraved. Two of Lady Macbeth’s main qualities expressed are ambition and guilt. These qualities are perfectly humane, however it is her choices of how to achieve this ambition, through manipulation and cruelty that gives her some evil qualities.

Don't use plagiarized sources. Get your custom essay on
“ What extent is Lady Macbeth Pure evil? ”
Get custom paper
NEW! smart matching with writer

Ambition is one of the qualities expressed by Lady Macbeth when she is first introduced in the play. Ambition is a part of human nature and being ambitious can be defined as being ‘eager for success’. After Lady Macbeth reads the letter from Macbeth, she was ambitious for Macbeth, her husband, to become everything that he can be, while she was also aware of the “illness” that should attend ambition.

“Glamis thou art, and Cawdor, and shalt be

What thou art promised; yet I do fear thy nature,

It is too full o’th’milk of human kindness…

That I may pour my spirits in thine ear

And chastise with the valour of my tongue…”

This can appear as ruthless and evil, yet it also shows Lady Macbeth’s loyalty and love for Macbeth.

One of the ways Lady Macbeth chooses to achieve her ambition is through manipulation. Lady Macbeth herself is the driving force behind Macbeth’s actions. She manipulates Macbeth with remarkable effectiveness and overrode all the objections of his conscience. She uses blackmail and repeatedly questions his manhood until he feels that he must commit the murder of Duncan to prove himself:

To be the same in thine own act and valour

As thou art in desire? Would’st thou have that

Which thou esteem’st the ornament of life

and live a coward in thine own esteem…

When you durst do it, then you were a man.”

This is a major flaw of Lady Macbeth behind her ambition for her husband’s success. She did not judge her behaviour and it causes the moral disorder that activates the plot of Macbeth. This shows that she is merely human and not pure evil.

Lady Macbeth’s cruelty is something else that expresses her evil qualities. Lady Macbeth rarely shows any sympathy towards any characters throughout the play and she does not hesitate to plot the details of the plan to kill Duncan. However, most of her cruelty is only spoken and she uses her cruel words to strengthen her self for her ambition and to manipulate Macbeth into killing Duncan.

That tend on mortal thoughts, unsex me here

And fill me from the crown to the toe topfull

“I have given suck and know

How tender ’tis to love the babe that milks me:

I would… have plucked my nipple from his boneless gums

And dashed the brains out, had I so swore

As you have done to this.”

Lady Macbeth expresses her cruelty through her actions only to drive Macbeth’s ambitions. She uses cruelty in her words when Macbeth is weak so that she can strengthen him too. This is only evil to an extent because she is making Macbeth commit an inhumane act, yet as she is being loyal and supportive of her husband, she is not pure evil.

“Out damned spot! Out, I say! One, two. Why then ’tis time to do’t…what we need fear? Who knows it, when none can call our power to account? Yet who would have thought the old man to have had so much blood in him? … The Thane of Fife had a wife. Where is she now? What, will these hands ne’er be clean?

…I tell you yet again, Banquo’s buried; he cannot come out on’s grave.”

Feeling remorse for being responsible for her offences is a humane quality and this shows that she does indeed have a conscience that she has been pushing away to support Macbeth. Just as ambition affects her more strongly than Macbeth before the murders, so does guilt plague her more strongly afterwards, to the point of taking her own life “by self and violent hands”. Deep down, Lady Macbeth is not as strong and cruel as she seems because she could not handle what she had Macbeth had done and this is also show that Lady Macbeth was not pure evil.

The character of Lady Macbeth is exceedingly complicated, with regard to her rich and fascinating combinations of qualities. She expresses ambition on which her evil actions of manipulation and cruelty are based, yet her expression of guilt makes it evident that she did possess a sense of right and wrong and remorse and sorrow. Lady Macbeth was blinded by her ambition, and her poor judgement in result of this blindness lead to the moral depravation of her actions. Lady Macbeth became a victim of her own imagination and in the end she recognises this. One cannot be pure evil and feel guilt for one’s wickedness at the same time, thus it can then be concluded that Lady Macbeth is not pure evil; She did had some evil qualities, in fact, this is what makes Lady Macbeth only human. 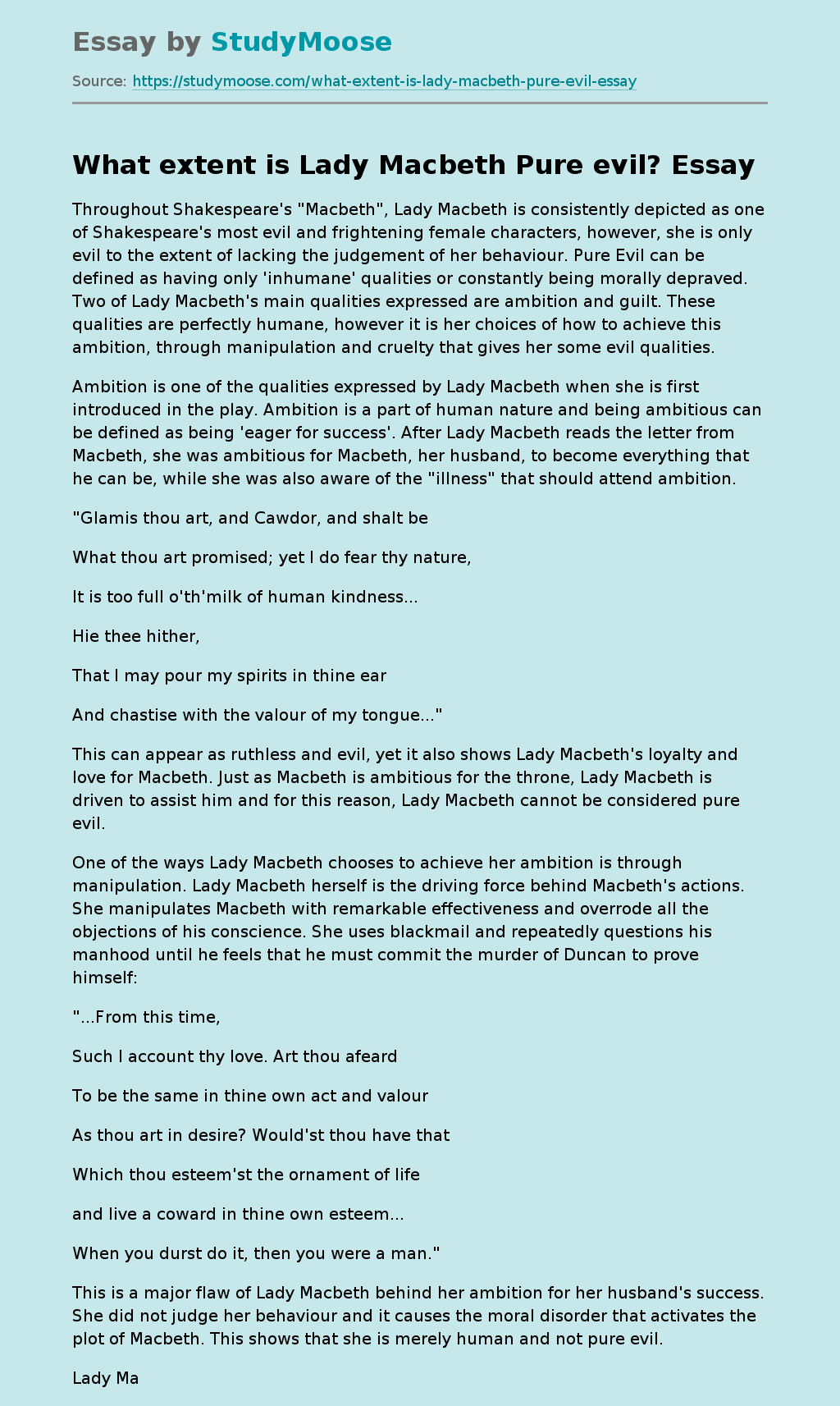