How did the supernatural impacted Macbeth?

The supernatural reflected the atmosphere and the beliefs of Scotland and much of Europe in the sixteenth century. Macbeth is a story that is completely engulfed with supernatural elements. It is more a supernatural story than it is drama. Madness, mayhem and horror are all words that best describe this play. Three hideous witches, a floating dagger and apparitions are all supernatural elements that the reader finds in Macbeth. Most importantly, these elements are major causes of Macbeths path of ambition, murder madness and his ultimate downfall.

Don't use plagiarized sources. Get your custom essay on
“ How did the supernatural impacted Macbeth? ”
Get custom paper
NEW! smart matching with writer

As the story progresses we see the supernatural events change location starting from the witches cavern to Macbeths castle. All this shows that Macbeth is highly dependent and seduced by the supernatural.

The opening scene of Macbeth begins with the three witches meeting on the heath and describing the atmosphere, where Fair is foul, and foul is fair (Act 1 scene 1). This implies that what appears good is bad and what appears bad is good.

It also shows that witches will become a central figure in setting the tone of the play which hovers through the fog and filthy air. Throughout the story, the witches prophesy and foreshadow everything that will happen to Macbeth and what he will do. Macbeth will eventually come to them more and more to know what lies ahead for him in the future.

From a heath near the forest, the witches give prophesy and the reader clues in what destiny lies for Macbeth. It is the witches who tell him that he will be Thane of Cawdor and shalt be King hereafter! (Act 1 scene 3).

Macbeth is shocked at this news considering the Thane of Cawdor is still alive at the time. This shows that Macbeth was not yet showing ambition or hunger for power but the witches had planted the seed that would lead to his eventual destruction. The witches also prophesy in this scene that Macbeths friend and comrade Banquo will have sons who will claim the throne after Macbeth and be lesser than Macbeth and greater (Act 1 scene 2). This gives the clue that Macbeths line might be short-lived and that once he is gone there will be no more of his descendants on the throne.

When Lady Macbeth learns of all this news through a letter sent by her husband, she immediately sees a promising future but fears her husband is too full of the milk of human kindness (Act 1 scene 5) to destroy those who lie in his path to ultimate power. It is Lady Macbeth who really triggers the evil side of Macbeth. As the story progresses however, we see the tables turn as she becomes tormented by her own guilt while her husband kills without conscience.

We do not see the witches again until the end of Act 3 when their leader, Hecate, is angry with them for telling Macbeth his future without her permission. In order to make amends she orders the witches to create more spells to give Macbeth overconfidence as you all know security is mortals chiefest enemy (Act 3 scene 5).

Another supernatural element that Shakespeare uses in the play represents Macbeths guilt and beginning of his madness is through the floating daggers in Act 2, which occur in Macbeths own home whilst King Duncan was guest. Before Macbeth commits the murder of King Duncan, he sees a bloody dragger that leads him to Duncans room. Macbeth questions if the dagger is real or a dagger of the mind, a false creation (Act 2 scene 1), in other words it is a hallucination. This dagger makes it so Macbeth cannot resist killing Duncan. It also brings the supernatural from outside to inside the castle.

Shakespeare uses the influence of apparitions twice in his story. One of the apparitions is of the recently murdered Banquo. This ghost visits Macbeth at the banquet right after Macbeth learns that Banquos death was successfully committed by one of the hired murders. Macbeth is shocked and badly shaken by this apparition and looks like a fool to his party guests. The dominating Lady Macbeth tries to calm him down and reassures the guests telling them Think of this, good peers, but as a thing of custom, tis no other, (Act 3 scene 4). This is a turning point in the story as it shows the beginning of Macbeths descent into Madness.

Macbeth continues his obsessive dependence on the witches predictions as he once again in a cavern in Act 4. The witches conjure up three apparitions. The first is an armed head that tells Macbeth to Beware Macduff! Beware the Thane of Fife. The scond apparition is a bloody child that says that none of woman born shall harm Macbeth. The third is a child crowned with a tree in his hand that predicts Macbeth shall never vanquished be until Great Birnam Wood to high Dunsinane Hill shall come against him (Act 4 scene 1).

All of these apparitions give Macbeth a sense of overconfidence which untimely leads to his downfall. From these Macbeth comes to the conclusion that all men are born of women, so therefore he thinks that nobody can kill him. He also assumes that forests cannot literally move, so that should not be a problem to him either. The story shows however, that the soldiers fighting against him camouflage themselves with boughs from trees looking like a moving forest, and that Macduff was from his mothers womb untimely ripped (Act 5 scene 8).

From all these examples it can be seen that the supernatural has a great influence on Macbeths rise to power and his fall from power. We see that his growing obsessive reliance on the witches prophesies causes him over confidence which leads to his ultimate demise. We also see Macbeth descend into evil and being seduced by the supernatural, by having supernatural events change location. All of these elements show the causes of Macbeths path of ambition, murder, madness and finally his total self-destruction.

How did the supernatural impacted Macbeth?. (2016, Jul 29). Retrieved from http://studymoose.com/how-did-the-supernatural-impacted-macbeth-essay 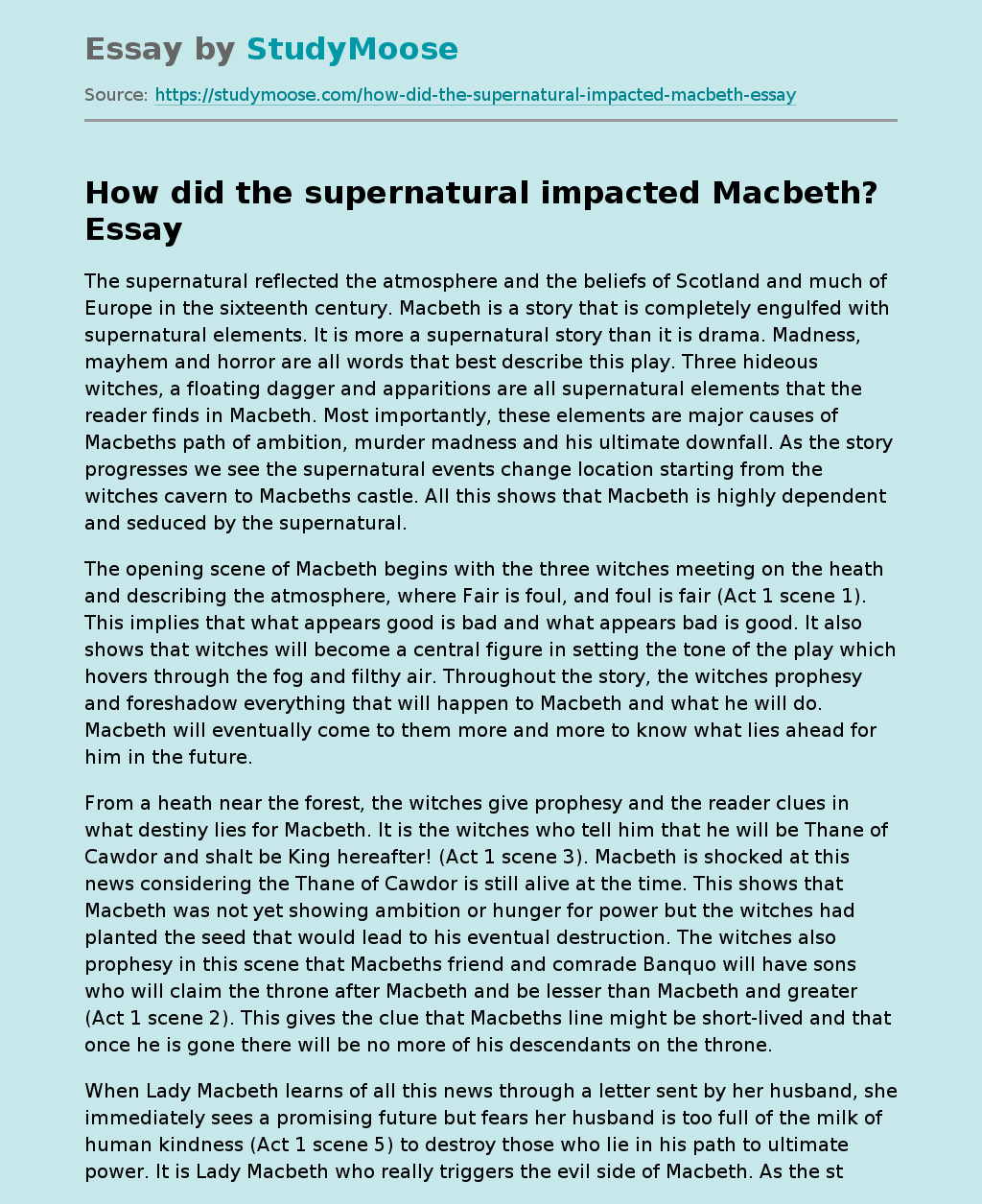