Macbeth's Ambition Leads To His Downfall

Ambition and selfishness can often be a double-edged sword, ambition can aid a person in striving for what’s best for themselves and selfishness can help them get what they want. But when does that go too far? “Great ambition is the passion of a great character. Those endowed with it may perform very good or very bad acts. All depends on the principals which direct them.” -Napoleon Bonaparte. The tragic playscript ‘Macbeth’ written by William Shakespeare, explores the dangers associated with blind, selfish, unchecked ambition.

Don't use plagiarized sources. Get your custom essay on
“ Macbeth’s Ambition Leads To His Downfall ”
Get custom paper
NEW! smart matching with writer

We follow Macbeth and Lady Macbeth as their honorable ambition turns from fighting for their country and king to evil ambition, as they are faced with clear moral choices that lead them down a path to destruction as they develop sinful character flaws. At the beginning of the play, Macbeth is introduced as a war hero, an honest man who would die for his king and country after just defeating Scotland’s biggest foe, Macdonwald.

Then Lady Macbeth’s longing for the crown causes her to manipulate and persuade Macbeth to do evil and they are both caught in a rapid downward spiral.

Ambition is the sign of strength in a character, although when unchecked the character may become greedy and power-hungry. Then ambition may lead to evil, selfish actions, and end in the downfall of said character. In other words, in Macbeth, Shakespeare uses the concept of ambition to explore how ambition leads Macbeth and his wife to design the killing of the throne and to explore how ambition has a devastating effect when it goes unbridled.

Finally, we see how Macbeth is driven to extremes of cruelty as he pushes his ambition in order to maintain the highest position of the power he can.

Initially, it clear that Macbeth is an honorable man who is repleted by his comrades due to his bravery on the battlefield against the Norwegians An injured soldier reports back to King Duncan concerning “Brave Macbeth”: “For brave Macbeth–well he deserves that name– / Disdaining Fortune, with his brandished steel, / Which smoked with bloody execution…” (I.2.16-18). King Duncan orders the death of the traitorous Thane of Cawdor, and Macbeth is rewarded with the title, giving him his first taste of power. The King thanks him and Banquo, calling Macbeth a “Valiant cousin, worthy gentleman,” to which Macbeth replies “The service and loyalty I owe.” These gestures portray irony as Macbeth would soon become his murderer and also deceives the reader about Macbeth’s ability to kill a friend and his uncontrollable desire to take the crown. Shakespeare quickly reveals Macbeth’s ambition for the crown after him and Banquo have an encounter with the three witches and hear of the first prophecy, he was careful not to show his excitement from the prophecy after Macbeth snaps at the hags “Stay, you imperfect speakers, tell me more!/…Speak I charge you” the reaction to the witches flags the reader to notice Macbeth’s uncontrollable desire of overthrowing Duncan. He then makes a leap between being a passive figure in the face of destiny to entertaining the idea that he may himself direct the workings of fate. Macbeth thinks upon this prediction that he will become king, “If chance will have me king, why chance may crown me without my stir”. Showing that if he were to become king, it would happen without him having to do anything. This leads us to wonder if, without his selfish ambition would he have murdered King Duncan, the witches seem to have brought to light something dark within Macbeth. This is where Macbeth’s ambition takes a turn for the worst Macbeth writes to Lady Macbeth to tell her of the weird sisters’ predictions, she knows that he is ambitious but “Fears thy nature, itis too full o’ th’ milk of human kindness,” she believes that he is too noble to see through that the prophecy is fulfilled and will not perform a murder. Lady Macbeth calls on evil spirits immediately to help her carry out the murder of King Duncan, showing her selfish ambition and uncontrollable desire for the crown as well. “Unsex me here of direst cruelty,” Lady Macbeth calls on the spirits to take away her femininity to make her callus and bitter. When Macbeth arrives home, Lady Macbeth meets him in a rampant frenzy, and asks about what it’ll take for her to become queen faster, she tells him of her idea to simply murder Duncan to make them both happy. Macbeth’s ambition now waivers as he is indecisive about the murder and has a struggle with his conscience over the prospect and indeed finds many good reasons for not killing him. He seems to still have some of that noble, honest man left inside him but ambition steadily takes over when his wife accuses him of cowardliness. It is only the goading of lady Macbeth over his manliness that keeps him on a bloody path, she chooses to play into his fears knowing that he will submit to her. “I have no spur to prick the sides of my intent, but only vaulting ambition.” This quote shows that he had no reason to commit murder, but his ambition is causing him to do so.

After killing King Duncan, Macbeth’s ability to act upon his ambition becomes clear, his will to remove anything that threatened his success became clear; his willingness to further kill showed that if we being to covet what others have then our ambitions can destroy us. his ambition has changed due to his wife’s manipulating and his own selfish ambition. Having achieved his goal to become the king of Scotland Macbeth is forced to become more brutal and cruel in order to secure his position which disrupted the natural order. The murder caused Macbeth great mental anguish, and is riddled with trauma after going against his character “…sleep no more: Macbeth does murder sleep…” and thus begins the descent of his insanity. Banquo quickly becomes suspicious, “I fear thou play’dst most foully for’t,” and fears that Macbeth committed the murder of King Duncan in order for the witch’s prophecy to come true. It is Banquo who first questions if Macbeth’s good ambitions are no longer good as he dictates his unwillingness to support Macbeth in his wicked deeds. Feeling threatened by Banquo and his sons so much that he believes “Every minute of [Banquo’s] being thrusts/ Against ]his] nearest of life.” Macbeth moves quickly to have Banquo murdered, one of his closest friends and allies. “I am in blood stepped so far that I should wade no more.” this quote shows that Macbeth is so advanced in this murderous haze that it is easier to go forth than to go back. Macbeth’s ambition to be king pushed him so far that he decides that it’s easier to be evil than to stop no matter how guilty he feels, his ambition was to have power thrust him into a completely different mindset than at the beginning of the play. The killing of Banquo also emboldened Macbeth’s downfall to insanity, Banquo becomes a victim to Macbeth’s ambition and lust for power which has now become his greatest weakness. As the play progresses Macbeth loses his conscience, he believes that in order to maintain his position he must stay bloodthirsty and consume all in his path. The fear, suspicion, and paranoia created by his power that was illegitimately gained lead to an inevitable bloodbath as the natural order is destroyed. Not only has Macbeth’s ambitions destroyed him and many other characters, but also creates the downfall of Scotland. Macbeth loses his mind as a result of his guilt over the crimes he committed to fulfilling his ambition, he battles with his mind attempting to tell himself that it was all in good reason but his beliefs tell him otherwise, “It will have blood; they say, blood will have blood.” In this line Macbeth reflects on what he did after he sees Banquo’s ghost, he has no desire to live anymore because of the acts that have committed.

Macbeth’s ambition has become so strong that he will not let anything even friendship get in the way of his desire for power. Even worse than the destruction of friendship is Macbeth’s willingness to kill an innocent man’s family. After Macbeth hears of Macduff’s fled to England he says “Give the edge o’ the sword his wife, abaes and all unfortunate souls That trace his line.” Showing how corrupt an evil he has become, he does not even care about the innocent lives of a wife and child. The fact that he doesn’t even consider the moral consequences shows how full of evil ambition he has become. Macbeth is so afraid to lose to Macbeth that he kills his family to impair him. While this happens, Malcolm, son of Duncan, is also boiling with ambition. He will do anything to revenge his father and kill Macbeth and when he hears about Macduff’s family being slain he tells Macduff to “dispute it like a man,” he won’t let Macduff’s despair get in the way of his ambition. Malcolm also takes Macduff’s sadness as weakness probably because he himself does not have children or a family, he puts his wants ahead of others. Malcolm then tells Macduff to let his sadness “be this the whetstone of your sword. Let grief convert to anger; blunt, not the heart, enrage it.” While he still doesn’t understand Macduff’s sadness he tells him to turn it into more ambition to destroy Macbeth; the man who is responsible for his sadness. Through this, it is evident that Malcolm has enough ambition to take down Macbeth.

Macbeth's Ambition Leads To His Downfall. (2020, Oct 08). Retrieved from http://studymoose.com/macbeths-ambition-leads-to-his-downfall-essay 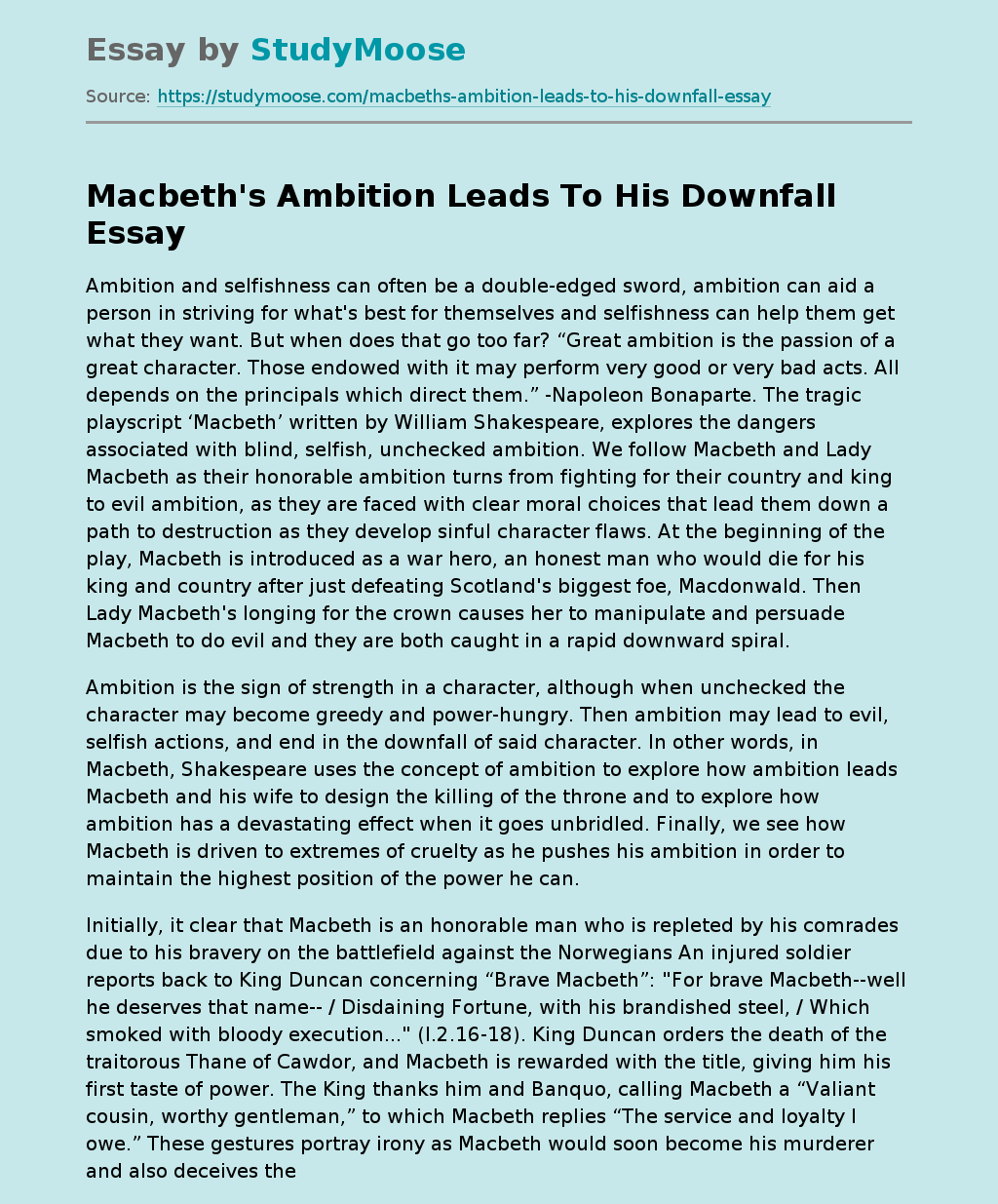