The events leading up to Macbeth's death

Shakespeare’s Macbeth is a splendid tale of tragedy sprung from greed and ambitions. Unlike Shakespeare’s other tragedies of Othello and King Lear, where Iago and Edmund were true villains, Macbeth was depicted as a man who possessed goodness; however, misguided by his lust for power and wealth. Macbeth’s ambition was his ultimate flaw, compelling him to succumb to the worst of his nature, and eventually led him to his downfall and inevitable death.

In the beginning of Act One, Shakespeare portrayed Macbeth as a brave and honorable general who received high praises and admiration from everyone around him including the king of Scotland, Duncan when he triumphantly defeated the rebel MacDonwald.

Don't use plagiarized sources. Get your custom essay on
“ The events leading up to Macbeth’s death ”
Get custom paper
NEW! smart matching with writer

In scene 3 of Act One the three weird sisters or witches approached Macbeth and prophesied that he was going to become the Thane of Cawdor and in time the king of Scotland. Macbeth did not believe the three bearded women at first until Ross and Angus arrived to tell him that the king had named him Thane of Cawdor.

Ambitious thoughts initially arose at this point in the play when Macbeth immediately considered murdering Duncan for the crown.

However, Macbeth showed he still had a conscience and was not purely evil in scene 7 of Act One when he was troubled over his terrible conflict. Macbeth wanted to obtain the crown but he was appalled at the idea of killing his king because kings were thought as chosen by god. “We will proceed no farther in this business: He hath honour’d me of late; and I have bought golden opinion from all sorts of people, which would be worn now in their newest gloss, not cast aside so soon.

” (Act 1, Sc. 7, L.33-37). This quote reveals Macbeth’s feelings of guilt. Later in the scene, however, Lady Macbeth’s accusations of unmanliness and inconstancy persuaded Macbeth to proceed with their plan despite his hesitations to betray a meek man who held complete trust in him. Guilt would follow Macbeth throughout the play, as he would often see the ghosts of Duncan and Banquo.

The witches representing evil and chaos were the roots of this tragedy. They wanted to produce madness in Scotland by tricking out Macbeth’s ambitious nature. As they undoubtedly predicted, the prophecy was too tempting for Macbeth to ignore. “I have no spur to prick the sides of my intent, but only vaulting ambitions, which o’erleaps itself and falls on the other.”(Act1, Sc.7, L.25-27) In this quote Macbeth admitted that it was only ambition that motivated him to become disloyal to Duncan.

When Duncan came to visit Inverness, Lady Macbeth, a co-conspirator, filled the guards with so much liquid that they were oblivious when Macbeth murdered Duncan in his sleep. After Duncan was pronounced dead, Macbeth and his wife became king and queen just as told by the prophecy. However, Macbeth failed to realize that prophecies were of natural occurrence and he defied that natural order with the murder he committed.

At the beginning of his film “Macbeth”, Director Roman Polanski fabricated the first act of deception of Macbeth. In it the actor portraying Macbeth saw where the witches went but told his companion Banquo that they vanished “Into the air.” (Act1, Sc.3, L.84) This act foreshadowed future deceptions on Macbeth’s part. Readers sympathizes at first how he was a victim to the witches’ manipulation; however, sympathy soon diminishes as Macbeth was driven to kill more innocent people as a result of his feeling insecure. Later in his film, Polanski shows the development of hardness in Macbeth’s character when he had the actor playing Macbeth who used his bare hand to put out a candle, with no expressions on his face of pain or any other feelings.

After Macbeth took over the reign, he became fearful of Banquo since the witches also prophesied that Banquo would be the father of a line of kings. This knowledge made Macbeth uneasy and paranoid to the point that he felt Banquo and his sons had to be dead in order for him to rest in peace. Banquo was soon killed; however, his son Fleance escaped. Macbeth again fell into anxiety; he went to visit the witches who told him to beware of Macduff. Macbeth immediately ordered Macduff’s family to be killed so that their death would bring him some sense of security. “The castle of Macduff I will surprise; seize upon fife; give to the edge o’ the sword his wife, his babes, and all unfortunate souls that trace him in his line.” (Act 4, Sc.1, L.164-167) It shows Macbeth was now ruthless, cold, and murderous. He would do anything to keep his power.

After Macduff received news that his wife and son had been murdered, he and Malcolm set out to confront and kill Macbeth. Macduff succeeded in avenging his family for he slew Macbeth in the end. Macbeth’s tragedy represents what would happen if people let their dark natures surface and take over. Although most people are capable of overcoming temptations, some can not. In Macbeth’s case, his ambition, initially encouraged by the witches and his wife, became such an overwhelming force that it made him act against his own conscience and resulted in a tragedy of his own making.

The events leading up to Macbeth's death. (2016, Jun 21). Retrieved from http://studymoose.com/the-events-leading-up-to-macbeths-death-essay 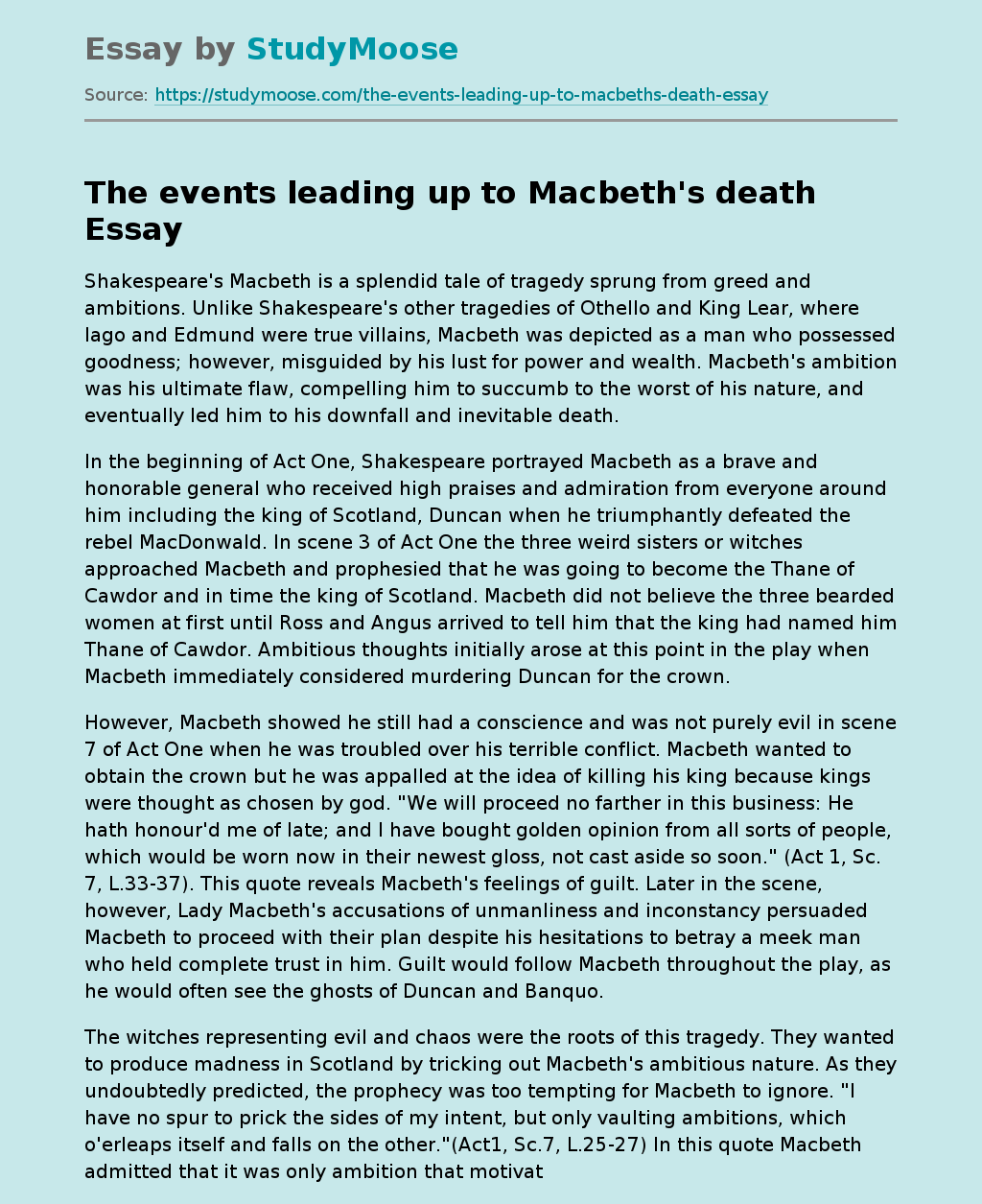